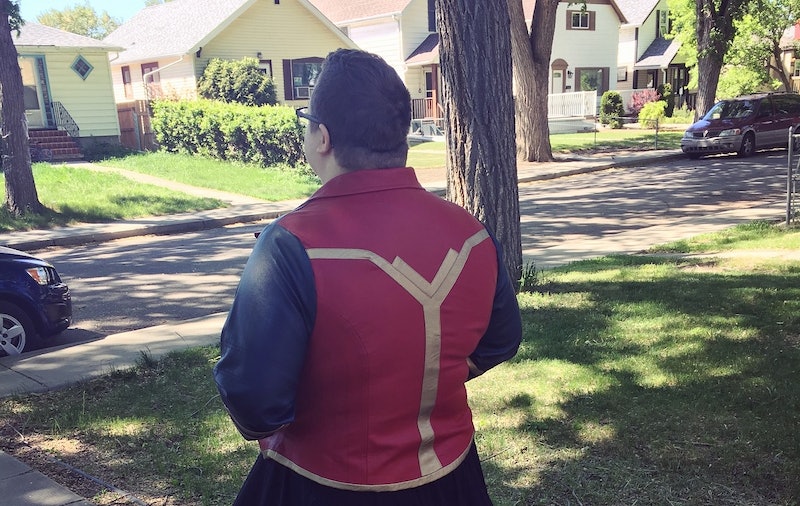 When news landed in my inbox that plus size brand Torrid and fangirl fashion company Her Universe collaborated on a Wonder Woman capsule collection, I knew I had to have it. Like many fans, I've been hanging on to the golden promise of a solo Wonder Woman movie since Diana's film-saving screen time in Batman v Superman: Dawn of Justice.

Also, as a longtime comic fan, I live for the deluge of fresh merch that pours out whenever a new comic book movie is released. Normally that means scooping up some NSFW Deadpool pins or an "aww, coffee, no" Hawkeye T-shirt, but in this case, Torrid's eight-piece collection — a mix of looks including dresses, tanks, and jackets — arrived and fulfilled all my wildest fanboy dreams.

As tempting as pieces like this Daughter of Themyscira tank, made to mimic Diana's iconic sword-in-dress moment, are, I wanted to snag some business casual looks. So when Torrid offered me samples, I requested this lasso skater dress, this faux leather moto jacket, this off-the-shoulder tunic sweater, and a star print ombre skirt, which unfortunately sold out, and is no longer listed on Torrid's website.

I expected the moto jacket to be my far-and-away favorite, and it definitely came close. The jacket's not as soft as other faux and vegan leather jackets I own, but it stretches well and the mid-range size I ordered fits my shoulders, which is not something I expected, as I often end up shopping for jackets in the men's section.

It fits my back perfectly, but is cut a little short in the front, so I ended up wearing it over a dress. No complaint here, since my spouse got this totally bomb superhero shot of me, but if you're looking for something to wear over jeans, you might consider sizing up.

Out of all the pieces I received, this one is the most in-your-face Wonder Woman. But it's one of the subtler pieces that stole my heart.

Inspired by Diana's lasso of truth, this dress is just — ridiculous. As soon as I pulled it on, I knew I was doomed to find every excuse possible to wear it. I have small hips and usually struggle with dresses, since they often have more hip and butt room than I have hips and butt. In this case, though, the lasso belt helps frame my waist and hips, and the skirt flares out, giving the illusion that I possess more booty power than I do.

I ordered a size 22 and have a 54-inch bust, and I found the dress actually compresses my chest a little — a big plus for me, since I have a constant pathological fear of my E-cup breasts bouncing out of dresses (alas, no artful side boob in my future).

Each piece in this collection stands on its own, but I requested the tunic sweater and star skirt thinking they might be a set. Oh, how wrong I was.

I'll admit it: I struggle with this one. The collar is supposed to be flat over your chest and slip off one shoulder, but I can never keep it from bunching up in the back. And every time I reach to fix it, I feel like Dracula with a popped collar. I suspect it's a sizing issue — in this size, there's just too much collar, and it is, in a turn of events I don't think has happened before, too wide for my shoulders.

I tried pairing this with several pieces, including the star skirt and a plain leather pencil skirt, but with the length of this, it outshines everything, so I ended up wearing it over a plain pair of jeans. This piece is a great all-seasons look; the fabric is super breathable, and even in 80-degree weather I had no issues with temperature.

In the end, I'm glad this doesn't mesh with the star ombre skirt, because the skirt deserves to have every inch of it shown off.

I say this as someone who generally dislikes skirts: This skirt is a gift. A genuine gift. The length, the pattern, the way it can be worn either high or low on the waist, the fluttery, distinctly cape-like feeling it creates when it brushes the backs of my ankles...I love the lasso dress, but I think this skirt is the most fun — and certainly most eye-catching — piece to wear.

A rep for Torrid tells Bustle the collection is in high demand, and "will likely sell out within the next 2-3 weeks," so if any of these pieces call to your inner superhero, snag 'em as soon as you can.

As for me, I'm still trying to decide which of these to wear to the Wonder Woman premiere.