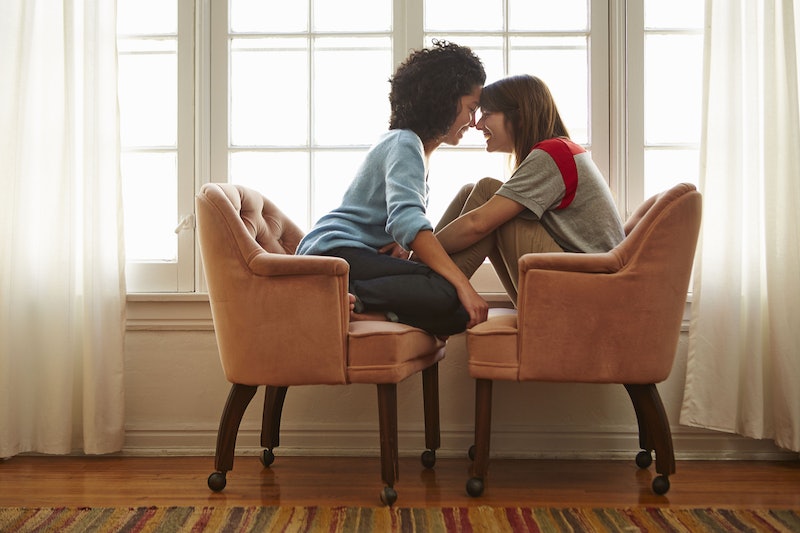 Right before Valentine’s Day this year, I deleted the dating apps that were gathering dust on my phone, dressed up and went to a bar by myself. While I stood at the counter surrounded by a bunch of other nervous single people, I struck up a conversation with the beautiful girl standing next to me. “Are you here for that thing as well?” I asked her. (We’ll call her Jessica). “The love social experiment?,” Jessica asked. “Yeah.”

A month before, I’d seen a Facebook ad for this event called Fall In Love With a Stranger floating around. Based on a viral New Yorker essay called To Fall In Love With Anybody, Do This, the concept was that 200 people would be paired up randomly on Valentine’s Day and made to ask one another 36 questions. These weren’t just any questions either - they were ones designed by two married psychology professors called Arthur and Elaine Aron (who literally study love for a living) and aimed to create “accelerated intimacy” between strangers.

According to an email they later sent out, 3700 people signed up for the event including me and my friend. I wound up snagging a spot. My friend didn’t.

I’ve been on my fair share of Tinder and Hinge dates in the past couple of years, but I’ve been finding the apps frustrating recently. I don’t know if it’s just me, but I just feel like you end up having the same superficial conversations over and over again (maybe messaging just heightens that). So this self-described “social experiment” seemed like the perfect antidote to all the soul-destroying small talk. We wouldn’t have a chance to even venture into that territory because, as I’d later learn, the questions are super intense.

Jessica and I stood at the bar for fifteen minutes, chatting idly about what brought us to the event and waiting until the experiment started. We had no idea who we were going to be paired with as we’d been told previously in an email that even the organisers had “literally have no info other than your preferences you filled out” in a form prior to the event. (These included your sexual orientation, age, confirmation that you would be “respectful at all times” and an understanding that the event “requires honesty and openness”.)

We were all ushered into a dark room that gave me flashbacks to university, as it was lined with numbered desks and chairs in a decidedly unromantic formation. Every desk had two pieces of paper on it printed with a list of 36 questions, like an exam paper. We had all been assigned numbers and had to sit and wait at our desk for our partner to come along, if they ever did.

I wasn’t paired up with Jessica. That would be far too much of a coincidence. I was however paired with somebody I'll call Sam. She seemed more nervous than I was, so we awkwardly hugged one another hello and sat down in silence for a few seconds before I suggested we start on the questions. They were deceptively easy to begin with, asking things like:

1. Given the choice of anyone in the world, whom would you want as a dinner guest?

2. Would you like to be famous? In what way?

3. Before making a telephone call, do you ever rehearse what you are going to say? Why?

As we started batting answers back and forth (“I definitely have a script in my head before I dial up” and “I feel like they might be judging me, I know it’s irrational”), it became pretty clear that these were the warm up questions. The way the questions work is that they’re split up into three different sets of increasing emotional intimacy — or difficulty, as I’d later come to learn — and they escalate pretty quickly. I don’t remember all of her answers or my own, but I do remember when things started to shift.

I read out question ten: “If you could change anything about the way you were raised, what would it be?”

I answered first, “I wish I’d gone to a different school.”

She told me, “I wish my father hadn’t passed away while I was growing up.”

I think even though I’d wanted a deeper connection with somebody, I was still pretty floored by how she quietly and unflinchingly told me something so serious. We diverged off script for the first time, sharing a real moment of connection as I told her how sorry I was and she explained how it had affected her life.

I struggled with the next question which was to “take four minutes and tell your partner your life story in as much detail as possible”. It was just a boring clinical breakdown of where I’d grown up, what university I’d gone to, where I ended up working and how I made it to London. She told me in detail how her life had changed after her father’s slow death from cancer, why she had chosen to move away from her mother and come to London and why she was here at the event.

It surprised me that she was being so open just a few minutes into meeting me, but this was exactly what I’d wanted. I felt stupid for joking around and falling into the same trap I’d been frustrated by on dating apps; throwing out funny quips and giving answers that didn’t mean anything at all, that had no serious emotional attachment. And here she was taking the experiment totally seriously, patiently waiting for me to give her something back.

We reached the end of our first set of questions, so we decided to take a break and grab a drink before starting up again. Many gin and tonics were had that evening, I can tell you that. But as we sat down and started with the next question, I decided to throw myself into the deep end the way she had.

“If a crystal ball could tell you the truth about yourself, your life, the future or anything else, what would you want to know?” she asked me.

“I’d want to know what happened the night one of my best friends passed away,” I told her, fighting through my anxiety. “I was in London at the time, she was back home in Hong Kong when it happened.”

Instead of apologising immediately the way most other people do when faced with other people’s grief, she nodded silently and didn’t tear her eyes away. For the first time in a long time, it was refreshingly bittersweet that I was sitting here with somebody who didn’t have to say anything. I could just tell instantly that she understood the weight of that statement. It felt like I’d arrived at the cliff edge she’d been waiting beside, ready for me to throw myself in with her, and now I finally had.

Not that the experience was working out as well for everyone. I could see Jessica sat in the corner of the room opposite me grow sadder and angrier as she waited for thirty minutes for her partner to show up. When he eventually did, she spent ten minutes talking to him. Then she stood up, picked up her bag and walked out.

I don’t want to tell you too much about the things Sam and I discussed because I first of all, don’t remember most of them since it was a while back. Second of all, there was something sacred about that little hour we shared together. But after a while and especially after the second set of questions, it started to feel like we were handing parts of ourselves to one another. Our worst moments: “carrying my dying father on my back” she offered. “When somebody rang me to tell me my friend had passed,” I returned. Our dreams: “I want to run my own business,” she told me. “I want to work for a year in Japan,” I told her.

It was like these floodgates had been opened and yes, if you’re wondering, there was a romantic undercurrent to all of it. I mean, she was beautiful of course and we definitely flirted a little, but it almost felt like there was this hunger on both of our sides to find out as much about one another as we could, for as long as we had. By the end of the three sets of questions, I felt like I knew her better than I knew some of my childhood friends. It came up again and again on both our sides where we would give an answer, then realise in surprise that we had just told one another something we’d never shared with even our closest friends, family or other people we’d been in love with before.

If you asked me now what colour her eyes were, I wouldn’t be able to tell you. But I can tell you without a shadow of a doubt that Sam was easily one of the bravest people I’ve ever had the privilege of meeting. She’s woman who doesn’t hold anything back and pours herself into her love for other people, even when and especially when it comes at a cost.

She’s incredibly generous and sees the potential in others, working tirelessly to raise up small businesses and her friends (at one point, she even calmly asked me why I wasn’t working towards my own goals and how we could fix that).

I know what you're wondering. You want to know if we fell in love. I can’t speak for her, but I think I did. Not in a romantic, I want to spend my life with you kind of way. But more in the sense that I was so in love with her as a person, with the way she had been shaped by the weight of her life and the way she had invited me into it without thinking twice.

We got one final drink together after we finished up at the bar, then walked out together. When we reached the traffic lights, we hugged each other for a long time — then parted ways. We didn’t exchange numbers and we’ve never spoken again.

To be honest, I don’t even remember her real name anymore. But Sam made me remember something I’d forgotten over the past couple of years, swiping right and sending GIFs on dating apps.

You’re not always going to get what you put into your relationships. Sometimes it’ll be frustrating like a bad date, or at its worst, you’ll realise the other person will never give you what you're looking for.

It’s terrifying and sometimes devastating to give so much of yourself to other people, but that doesn’t mean you should stop doing it. There’s going to be somebody out there who’ll sit across from you at a tiny bar table, nervously clutching a crumpled up question sheet in their hand. And if you haven't met that person yet, keep on looking because you never know what magic is waiting around the corner.