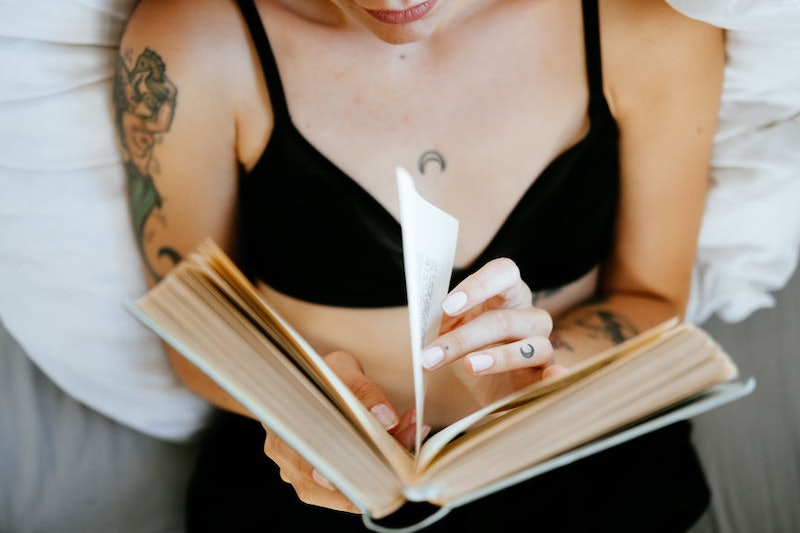 When I tell people that I wrote a novel and got it published, often women will say, "Wow, that must feel like giving birth." I answer with a circular nod, my heart edging into my throat.

It’s a well-meaning remark, I know. And all praise to metaphor, but I don’t know if it compares because I’ve never given birth. Unless you count the time my body, against my wishes, expelled the misshapen mass I wanted so badly to be a baby.

After the bleeding started, at week 11, I crawled back into bed and told my then-partner what was happening. In almost the same breath, I said, "I probably won’t finish the novel either."

It was an odd statement, I suppose, and certainly not very kind. But a baby and a book were the two things I most wanted. It somehow made sense that they were tethered.

By my mid-30s I decided consciously that I wanted motherhood. I wrote about the choice in a long essay. I even made a dance about it. I worried a little that motherhood might diminish my impulse to make art, burying me in sleep-feed-diaper-school-sports schedules.

But other times, I thought of making a baby as the most important art project of my life. When I was paying for fertility doctors and (for a time) donor sperm, I even considered putting the project up on Kickstarter. It seemed like the ultimate artistic collaboration. First, two cellular "ideas" come together to create a single form at conception. Second, that long duet of gestating, laboring, birthing, feeding, rocking, holding, then letting go, seemed the most rigorous and poetic dance a body could do. Third, raising a child appeared to be an everyday practice of showing up, nurturing, responding, being patient, experimenting, and in time making space for a new (little) collaborator and all of his or her ideas.

But other times, I thought of making a baby as the most important art project of my life.

Over the next 10 years, I did try many more times to have a baby. I imagined with crystal clarity being pregnant and giving birth. Visualized it, dreamed it, planned it. I showed up for the process for a decade, full of faith, but I could not make the visions materialize. Endometriosis was most likely to blame. For a long while, my life was a series of consultations and therapies, the shelves of my pantry full of possible remedies, none of which worked.

Through the grief and longing, I also showed up to my desk. I visualized the novel as a book I could hold in my hands. Dreamed it, planned it, plotted it. Some days were dreadful. I got lost. I felt incompetent. Other days, I wrote lovely sentences, met unexpected characters, and connected plot points. Eventually, I finished it.

I made other art, too: more dances, performances, papercuttings, photographs, stories, essays. I make art for many reasons, but during the dark decade of infertility, I did so mainly to prevent myself from drowning in despair. While I was often proud of what I’d made, I would have traded it all in for a heartbeat.

Maybe I still would.

I know that’s an impossible exchange, and a futile thought exercise. If there’s one thing I learned during that prolonged heartache, it’s that the surest way to continue suffering is to keep wishing for something that isn’t. But I didn’t learn that lesson very quickly.

Around the ninth anniversary of the miscarriage, when the truth about my incapable uterus seemed clear, I went to Southeast Alaska on a two-month artist residency.

One weekend a friend took me by boat to an island off the coast of the Tongass National Forest. In the rustic cabin where we made camp, someone had left a copy of Harper’s magazine with Rebecca Solnit’s essay, “The Mother of All Questions,” inside. Her words turned out to be a transcendent gift.

If there’s one thing I learned during that prolonged heartache, it’s that the surest way to continue suffering is to keep wishing for something that isn’t.

Ruminating on society’s limited prescriptions for happiness, particularly for women, Solnit recounts the time an interviewer, instead of asking her about the books she had written, interrogated her about the children she did not have. His indecent question, she writes, "assumed that there was only one proper way for a woman to live." Many things about the essay soothed me, but the paragraph that may have saved my life was this one:

"People lock onto motherhood as a key to feminine identity in part from the belief that children are the best way to fulfill your capacity to love … But there are so many things to love besides one’s own offspring, so many things that need love, so much other work love has to do in the world."

From then on, I began to see that my desire to make and raise a child was connected to my desire to expand joy, for myself and others. It was an extension of my supersized love for the world, which is also what so much of my art is about.

I went home and finished my novel, and a year later, my agent sold it to a publisher. I can safely say it’s been one of the greatest accomplishments of my life, but I can’t say it dried up all of my sorrow about not being able to conceive and birth a child.

It was an extension of my supersized love for the world, which is also what so much of my art is about.

I don’t mean to be ungrateful. I know the congratulatory women are saying, "You did a really hard thing! You made something." But when all it takes to uncover a reservoir of longing beneath my skin is a little scratch of a word, I’d prefer a different metaphor. A book is not a baby.

There are other ways to mother, I know, and perhaps the planets will align, as they say, to lead me on a path toward one of them. But in those days, I wanted what I wanted. There was no hierarchy. There was no choice. Despite my unyielding efforts, I did not birth a child. Nor did I birth a novel. I wrote one. I showed up. I asked for help. I pushed. I made sure the manuscript didn’t get tucked away in a drawer. I kept it in the light. I kept my focus. I kept going.

'The Lightest Object In The Universe' by Kimi Eisele

One of the characters in the book, a widower, walks across the country at what appears to be the end of the world. In grief, he walks through the darkness toward new love, the only thing he can imagine.

I used to think maybe I was writing my life partner into existence — the man who would walk 500 miles, and then 500 more, as the song goes, to fall down at my door. To make a family with me. But now I get that my protagonist was me, of course. Walking forward, pulled by longing. Despite emptiness, despite loss. Now and again looking up to find beauty, to meet helpful people, to show kindness. Now and again lying down on the earth and crying out to the stars. Then getting up and walking some more. What else is there? What other way to make a life? How else to do the work of love?

Kimi Eisele is the author of The Lightest Object in the Universe.