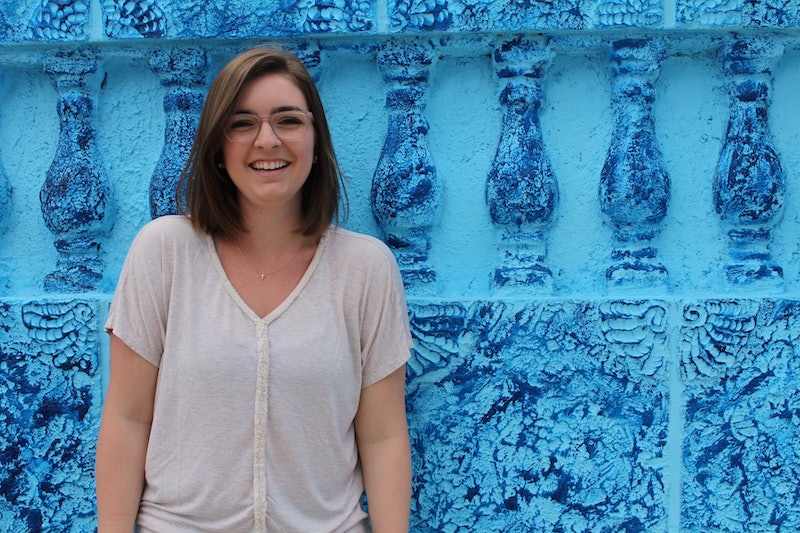 I found the first lump in my breast on New Year’s Day, 2012. It was 2 a.m., and I was showering after a party at my best friend’s boyfriend’s house. We were juniors in high school and had stayed up half the night drinking soda and playing with fireworks (we weren’t the kind of kids who threw keggers). I was trying to wash out the hairspray and thick, black eyeliner which made me feel more dressed up than usual, when I decided to try to do a self-breast exam. I have no family history of breast cancer, but I'm a bit of a worrier and my resolution was to be more proactive about my health, and a simple exam seemed like an easier start than quitting Diet Coke.

I felt up my left breast, just as I had been taught by various breast cancer awareness campaigns and fliers I'd seen in doctor's waiting rooms. Arm over my head, poking around the outside circumference and moving inward, everything seemed fine. Then I moved on to my right breast, got to my right nipple and I felt a lump. A rubbery, misshapen little ball rolling around under my nipple.

Oh my god, I thought, do I have cancer?

I tried to just go to bed when I finished my shower, but I couldn’t stop my racing heart. I pictured myself in the hospital, losing my hair, losing my breasts. Terrified, I woke up my mother to tell her what I found. “Can I feel it?” she asked. I took off my pajama shirt and told her where it was, and her eyes widened as she rolled the lump around under her fingers. “I’ll call my OB-GYN in the morning.”

As a preteen, I was obsessed with my breasts. I was a late bloomer compared to most of my peers, and I was afraid they would never grow, or they would be so small that it wouldn’t matter if they were actually there. My mom bought me a copy of The Care & Keeping of You by the American Girl Library, and I read it more closely than my Bible. The illustrations taught me how to insert my first tampon, shave my armpits, and wash my face. But the illustration about breasts got most of my attention, as it showed what breasts looked like (on the outside) as they went through stages of growth. I would spend hours looking in the mirror, dissecting my breasts’ shape, size, nipple color, feel and more, using the illustrated chart as a measuring stick.

By the time I was 17, I was finally confident in my looks. My breasts had grown to a satisfying C-cup, and I wore push-up bras to give them an extra boost. My womanly shape made me feel beautiful – sexy, even – and I felt as though I had achieved what my younger self had always wished for. When I found the lump in my breast, I felt like my body was betraying me.

It was all I could think about – in English class, at dance rehearsal, on my way to sleepovers – but I didn’t tell any of my friends.

My mom called her OB-GYN as soon as the office opened, but the next open appointment was still a month away. I was shocked – “A month?!” I practically shrieked at her. I had no idea if the lump would grow in that time, or if more would show up. But our doctor assured us it was OK to wait that long to be seen — it's uncommon for 17-year-olds to have breast cancer, and my lump was probably nothing to be too concerned about.

Still, it was agonizing waiting on the time to pass, feeling like I had a ticking time bomb literally inside my chest. It was all I could think about – in English class, at dance rehearsal, on my way to sleepovers – but I didn’t tell any of my friends. I was afraid to speak cancer into existence, and having them worrying about me would not have helped anyway.

To be honest, other than what I had read in the pamphlets, I didn't actually know much about breasts — how the tissue changes with our hormones and age, how one woman's breasts can just be naturally lumpier than another's. My mom didn't know a ton of this stuff either, and while she trusted the doctor that it was OK for us to wait a month for an appointment, she still spent most of her free time researching breast cancer and breast lumps, stress-eating case after case of Cutie oranges while she read. Her findings – that cancer would be rare in someone my age, that most masses in breasts are cysts and that cysts are fairly common – were comforting, but still didn’t make me feel totally safe. Only the doctor could do that.

I don’t remember much about the gynecologist appointment; I was so nervous. Your first trip to the gynecologist is stressful enough without a breast lump, and without your mom in the exam room with you. I do remember the odd realization that this OB-GYN office was located across from my pediatrician. I definitely wasn’t a kid anymore, though. It was my first time in stirrups, and I was worried I might have cancer.

After the vaginal exam, the doctor palpated my breast and confirmed that she felt the same lump I did. When she said it was likely a cyst, I exhaled the enormous breath I’d been holding in for weeks.

Still, she recommended we schedule a breast ultrasound at the local hospital to be sure. A diagnosis of a breast cyst would make this not a big deal, but any mass or new abnormality on a person’s body requires a doctor’s care and attention.

I didn’t have just one cyst, but rather a clump of them – maybe four or five, which is why it felt so lumpy rather than smooth and round.

The ultrasound appointment led to another month of waiting, with more Cutie oranges but a lot less stress. We trusted the advice and care of the doctor. When the appointment finally came around, the images confirmed that the lump was benign. Even more, I didn’t have just one cyst, but rather a clump of them – maybe four or five, which is why it felt so lumpy rather than smooth and round. The cysts were caused by hormonal fluctuations, and the radiologist said the cysts might fluctuate in size throughout my menstrual cycle.

After wiping the gel off of my breast, the radiologist sat down with my mom and me to discuss my options. We could elect to deflate the cysts with a needle aspiration, sucking out the liquid filling inside each one with a needle, but that wouldn’t remove the sacs. They would likely just re-fill with fluid later. Surgery wasn’t recommended as an option either, since the cysts weren’t causing any pain or other problems. The decision ended up being simple: To monitor the cysts with regular self-breast exams and get check-ups if there were any major changes.

As we walked out of the hospital, Mom and I relaxed. We could finally stop worrying. For now.

Over the next six years, I would come to know my breasts intimately. I did self-breast exams at least once a week, and oftentimes more if I couldn’t remember the last time I did one. The frequent exams weren’t necessary, but they made me feel in control. After a stint on hormonal birth control in college, my cup size grew more and my cysts shrank. They have been about half of their original size ever since.

About two months ago, I found something again, this time near my armpit in my left breast. Sh*t. I felt the familiar panic, and continued to feel the lump as I tried to calm myself down. This lump was small and had a similar rubbery texture to my other lumps, but it was teeny tiny. And it was stuck – I couldn’t roll it between my fingers like the other lump. I decided to wait a while, to get through my next period to see if it grows at all, and then see about a doctor.

A month later, not only was the lump still there, but it had doubled in size, revealing a lump that felt just like my others. The familiarity was a relief, but I still needed to get it checked out. I knew the chances of it being cancer were super slim, but any sort of breast change that weren’t consistent with normal fibrocystic breast change could be problematic. Now that I’m living in Chicago, I asked friends for OB-GYN recommendations and got an appointment. Thankfully, I only had to wait two weeks this time.

The visit went just like any other well-woman gynecological appointment. The doctor performed a regular vaginal exam, and then palpated both of my breasts to examine both my old cysts and the new growth. “Yep,” she said, pressing onto my new lump, “this feels consistent with fibrocystic breast change.” Again, she recommended an ultrasound to confirm, and I had another two-week wait for the appointment.

I was familiar with the routine: check in, change into the robe, wait on the radiologist, take off the robe, ignore how weird the gel feels on your skin, watch the radiologist read the images. But this time, we didn’t see the little orbs. This time, there was nothing.

How could there be nothing? I thought. I definitely felt something, and so did both doctors.

The radiologist took the images, and my mind raced as I waited for the doctor to read them and get back to me. What on earth is it, I thought, if I feel something but can’t see it. If it’s not a cyst, is it a bad mass? Is it a weird complication?

The doctor told me that the new mass was a clump of dense tissue, and nothing to worry about. I breathed a sigh of relief, and my thoughts stopped racing. I had expected the mass to not be a big deal, but I couldn’t have predicted what the doctor would tell me next: “Your boobs are totally normal.”

For the first time since that initial scare, I had a full understanding of my breasts.

“But doesn’t dense tissue increase your risk of breast cancer?” I asked, knowing that dense tissue is an independent breast cancer risk and makes it more difficult to see tumors on mammograms (understandably, I had been doing my research). “Only after age forty,” the doctor replied. “Everyone under forty has dense breast tissue. This clump is normal.”

I already knew about all the different ways a fibrocystic breast could present itself, but I had never heard that it wasn’t a disease or a huge concern. When I wasn’t interested in removing the cysts at 17, my previous doctors had just stopped there without informing me of this crucial information. Now, for the first time since that initial scare, I had a full understanding of my breasts.

Of course, I won’t stop seeing doctors or doing self-breast exams (and neither should you), and I probably will grow a few more lumps and bumps in my lifetime. But now, my sense of body confidence includes a new appreciation of my fully grown, lump-filled, healthy breasts. They’re the boobs pre-teen me always wanted.