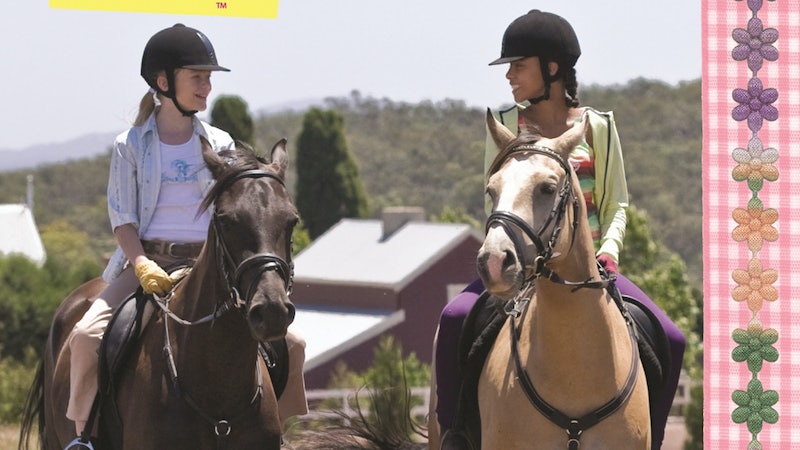 The proudest moment of my glasses-clad, braided-pigtailed childhood was when the pony handler at the Oregon fairgrounds asked me if I rode regularly because I mounted so well. I smiled shyly, but couldn’t bring myself to tell him the truth: I never rode but once a year in this ring of ponies. I learned how to mount from reading books about horses.

I was a horse girl. I plowed through Thoroughbred and The Saddle Club and Pony Pals and collected Breyer figurines to display on my bookshelves. I owned a horse encyclopedia, and I used it to memorize breeds and learn proper horse-mounting technique. I wore horse-themed clothing and jewelry and often hung a "STABLE" sign on my bedroom door.

But I was also that kind of horse girl — the kind who never owned a horse and never took riding lessons. Books were the only things that made them real to me, a Chinese American kid growing up in suburban Portland. Horses belonged to a different kind of people.

Of the hundreds of horse books I read, I can recall just one non-white protagonist...

But though horse books were my only outlet for this obsession, it is clear to me now that they were not meant for me, or written for me. Horse books were conceived and written for a specific audience, and that audience wasn't girls of color or most children of immigrants, even though I — and many others — believed, at the time, these books were meant for any ‘90s-born horse-loving kid.

Of the hundreds of horse books I read, I can recall just one non-white protagonist: Agba, the protagonist of Marguerite Henry’s Newbery Award-winning King of the Wind, a retelling of the origin story of Thoroughbred horses. A mute Moroccan stable boy living in the 1700s, Agba is a protagonist with an experience so far removed from mine — hundreds of years separated us, and hundreds of miles — that I was mostly along for the ride. I didn't see myself reflected in his story.

Occasionally, the books I read would feature a black sidekick, like Carole Hanson in Bonnie Bryant’s The Saddle Club. The jockeys in Walter Farley’s Black Stallion series were Latinx, but that was about it. The Phantom Stallion books, written by Terri Farley, featured several non-white characters.

Why were all the heroes of my equine-enveloped childhood white? Well, to get down to it: Horses are associated with class, and class is associated with whiteness. (The average yearly price of owning a horse in the United States is approximately $3,867.) Some of my beloved horse books did try to address class, but they never moved beyond the trope of the "poor white girl who eventually gets her own horse after working for or tolerating the spoiled snobs at the stable." And while this may be a feel-good-American-Dream-meritocracy narrative, it’s still an exclusionary one.

One of the major problems is the authors of the horse books I loved — including the few who wrote characters of color in their stories, like Marguerite Henry, Walter Farley, and Terri Farley (no relation between the two Farleys!) — were themselves white. This lack of diversity on the authorship level isn’t limited to horse books, but is the case with American children’s literature as a whole: Though improvements have been made, in no small part because of the work of organizations like We Need Diverse Books and People in Color in Publishing, numbers show that children’s authors today are still mostly white. Of the 3,617 children's books published in 2018 and reviewed by the Cooperative Children's Book Center, just 773 were written by people of color or American Indian authors.

In Terri Farley's Phantom Stallion books, which were set on a Nevada ranch, I encountered two characters of color: Jake Ely, who is half-Shoshone Indian and whose cultural heritage is vital to his character and the series as a whole, and Darby Carter, a girl of Native Hawai’ian heritage. Even though they had little in common with me, their presence on the page reminded me that my experience was valid, too. I loved to see them get so much time on the page.

"Expectations for authors have changed — for the better, I think."

Farley tells me she experienced pushback when she decided to write Shoshone Indian and Native Hawai’ian characters. She acknowledges that cultural appropriation is rampant in children’s and YA literature; however, she felt it was dangerous not to include characters of color. "The West is an incredibly diverse place,” she says. While she was securing the Phantom Stallion’s book deal, she was teaching full-time in a school that bordered a reservation. Many of her students were American Indian.

“I decided that I would let them slap me down if I was [doing] it wrong,” she says. Jake and his family were loosely based on people she knew.

Farley drew on real-life research from her relationships with her students and their families. Today, it is also standard for authors to hire sensitivity readers to offer feedback on characters from marginalized communities. "Expectations for authors have changed — for the better, I think," says Farley. "We’ve learned from each other, and sensitivity readers are part of that continuing education."

Farley’s books are middle-grade readers, which she argues is an incredibly crucial and impressionable age-range. "That's the age when kids are reaching out to more than just their nuclear family,” she says. “They’re discovering the world outside, spending more time with friends [...] And they’re looking out at what can be a very scary world.”

I realize that the problem wasn’t that I wanted stories with heroes who looked like me but couldn't find them; it was that I didn’t even know that I wanted these stories.

She believes that horse books are uniquely helpful for children of that age, many of whom are trying to figure out who they will grow up to be. “That’s the thing about horse books — you realize that sometimes you’re in control, and sometimes you’re the one being controlled. These are stories about big strong animals that can hurt you — but who can also love and protect you."

When I look back at my days as a "horse girl," I realize that the problem wasn’t that I wanted stories with heroes who looked like me but couldn't find them; it was that I didn’t even know that I wanted these stories.

A few years ago, I was visiting my friend Mariah in Los Angeles. On our drive to Santa Monica Pier, she told me about a new show she had been watching: Free Rein, a British horse girl story replete with attractive, brooding stable boys, snobby rivals, and a female protagonist who magically tames horses no one else can. But the protagonist was very different from the horse girls I read about as a child: She was black.

Mariah, who is also black, told me at the time that she thought Free Rein was a pretty mediocre show, but she couldn’t stop watching it because it felt so good. "It’s not that I was a horse girl, exactly," she tells me in an interview for this story. "It’s more so that I might have been, and never realized how the whiteness of that whole brand turned me off when I was young, and how I still craved that experience when I was older."

Free Rein fit the profile of "horse girl story" like a glove, just with a black protagonist. In Mariah’s words, it "shows people that this, too, can work."

I carry that hope with me now. Change is already happening. The world of children's literature is becoming more diverse, even if change is happening slowly.

On that same trip to Santa Monica, Mariah and I boarded the famous ferris wheel. It was only when we reached the top that she squeezed her eyes shut and admit to me that she's afraid of heights. Had I known, I wouldn't have asked her to come with me. Below us, the Pacific coastline spread out far into the twilight. I couldn't tell her how much I loved it, how much I love anything that feels like flying.

It reminded me of something I read in a book once — that when you’re riding at a gallop, you might as well have wings.