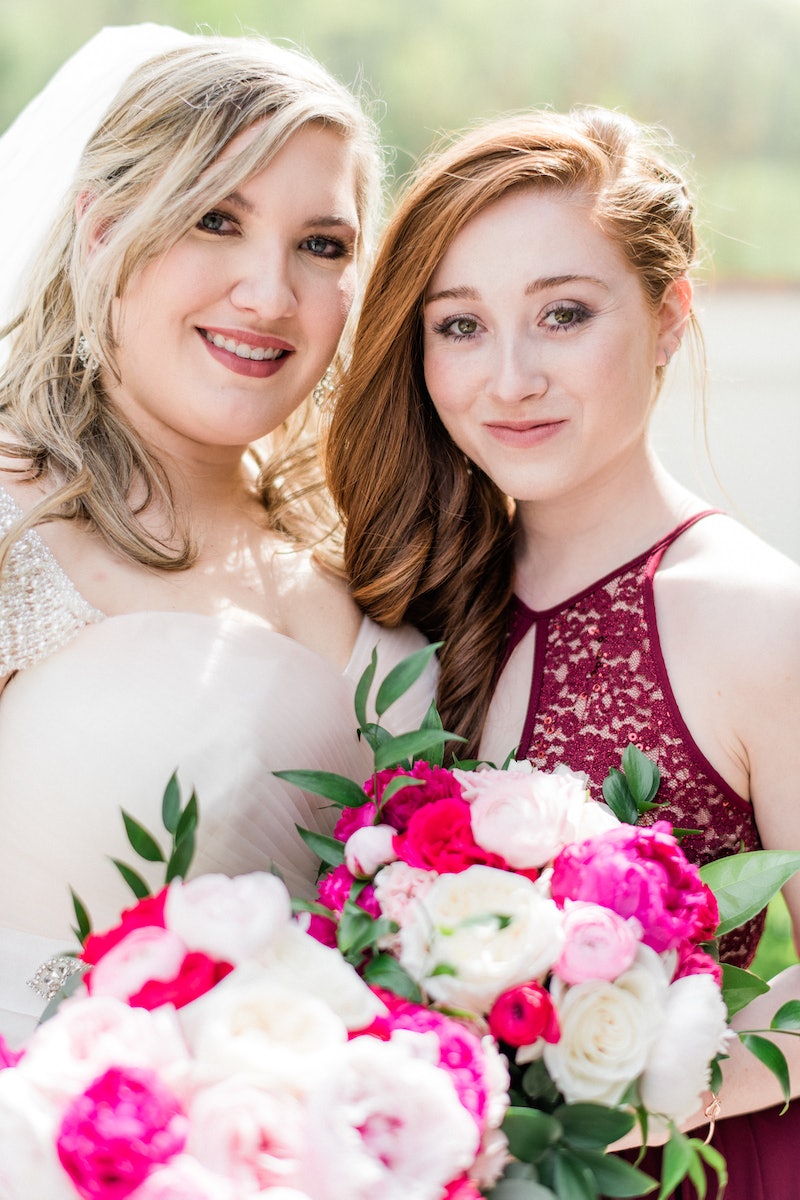 When my best friend Jenée called to tell me that her boyfriend had proposed, I was so happy for her, I shrieked with excitement — even though I was standing on L.A.’s busy Sunset Boulevard. I breathlessly asked for details about the proposal, and was even happier when, moments later, she asked me to be a bridesmaid. But when I told her yes, I wasn’t just committing to helping my best friend walk down the aisle on her wedding day — I was also committing to meeting her in person for the first time in our decade-long friendship.

Jenée and I first connected in 2008, when the Jonas Brothers were all the rage; Jenée (a Joe girl) and I (a Nick girl) were both frequent posters on the fan-rabid Jonas Brothers Facebook Discussion Board. After a few conversations, I learned that she was sweet, thoughtful, and deeply funny, and that she lived in Tennessee — thousands of miles from my home in California. I realized we were going to be friends when we stopped talking about all things Jonas and started talking about everything else. We went from posting on each other’s Facebook walls to nightly Skype calls, to all-day text marathons, to abusing Facebook’s short-lived video-post function, which we used to record 20-minute long videos for each other every day (videos that embarrassingly, everyone else could see, too). Jenée knew about my family, my friends, and how much I hated high school; I knew everything about her, too. It hardly felt like she lived more than 2,000 miles away, because through technology, I felt so close.

But throughout all of that, we never met.

Of course, we always wanted to meet in person. We were best friends! But we never had the opportunity. When we first connected, we were teenagers with limited funds and parents who disapproved of our “internet friendship;” later, when we became broke college students going to schools in faraway states, we couldn’t afford a visit. I graduated and started a job that moved me to the East Coast, while Jenée graduated and moved farther south to continue her education. Through it all, we kept in contact about our friends, apartments, families, dating, and boyfriends. When our friendship hit the nine-year mark and we still hadn’t met, we decided that we'd celebrate our tenth year of knowing each other by finally planning a visit. But six months later, I got a call that changed everything.

What if this special thing we had developed online and over the phone didn’t translate into real life?

Even if I had moved to Thailand, I would have found a way to go to Jenée’s wedding in Tennessee. Money and time concerns no longer mattered to me, because being beside her on this day felt like the best way to finish this first decade of our friendship — and begin a new one as adults who knew each other in real life. That’s how, about a year or so after that phone call, I found myself on a redeye flight out of Los Angeles to Knoxville. Before I left, my parents still joked that Jenée could be a catfish playing a very long game. However, my dad also mentioned that he’d seen Nick Jonas around West Hollywood the day before I left. I considered it a good omen.

My palms were sweating as I sat in an Uber, rushing past green fields and interstate on my way to the rehearsal, where I’d meet Jenée for the very first time. I’m a naturally anxious person, but I was extra anxious about this situation being awkward or a total bust. What if this special thing we had developed online and over the phone didn’t translate into real life? But I knew this was going to be one of the most important moments of my life, no matter what, and I just wanted to get out of the car and see her. I got to the church early and waited. When Jenée finally walked in, we ran to each other just like they do in the movies. Except it was infinitely better than any movie, because it was my best friend and she was real. Catfish be damned!

She was even more beautiful than she looked on FaceTime. I couldn’t stop touching her and hugging her because finally she was here. My anxieties evaporated, and my excitement remained. Within 10 minutes, I felt so comfortable standing beside her, talking to her, and finally meeting her now-husband, Wes, her family, and all those people I had only seen via FaceTime and Skype for so many years.

At the reception, I gave a toast that began with me saying, “I remember meeting Jenée like it was yesterday, and that’s because actually it was…”

It was how I’d always imagined meeting her would feel — only, we were also practicing for her wedding. Tomorrow was the day she and I had dreamed about during so many late-night phone conversations in our pajamas, talking about bouquets of peonies and first dances and Nick and Joe Jonas in tuxes. And finally, it was happening — an even better version of it.

On the day of the wedding, when I saw Jenée coming down the aisle, I cried. I was so proud to stand beside her in her pink and white dress and hold her bouquet while she said her vows. At the reception, I gave a toast that began with me saying, “I remember meeting Jenée like it was yesterday, and that’s because actually it was…” Afterwards, her family and friends asked me how I really knew Jenée, not understanding that it hadn’t been a joke. I had to explain that I was serious, we had really only met the day before, but we had known each other for much, much longer. People were both baffled and delighted; none of them had heard a story like ours. Most of her friends couldn’t believe that we had only met the day before, because we just seemed so natural together. Everyone laughed about it all being thanks to the Jonas Brothers.

I felt beyond sad when I had to leave the next day. In just two short days, our decade-long friendship had deepened more than I had ever imagined it could, and here I was, getting on a plane back home.

Jenée and I have now promised that we will see each other at least once a year. We're both adults with busy schedules who move around a lot, but we’re going to make it work, because we’ve learned that showing up for each other is worth it. Having years of faith, trust, and memories with someone and then finally getting to be with them in real life makes my heart feel whole and safe, in a way that I can only describe as being “old friends.” I can’t wait to give her a call one day and ask her to be a bridesmaid in my wedding to Nick Jonas — or whoever it may be.