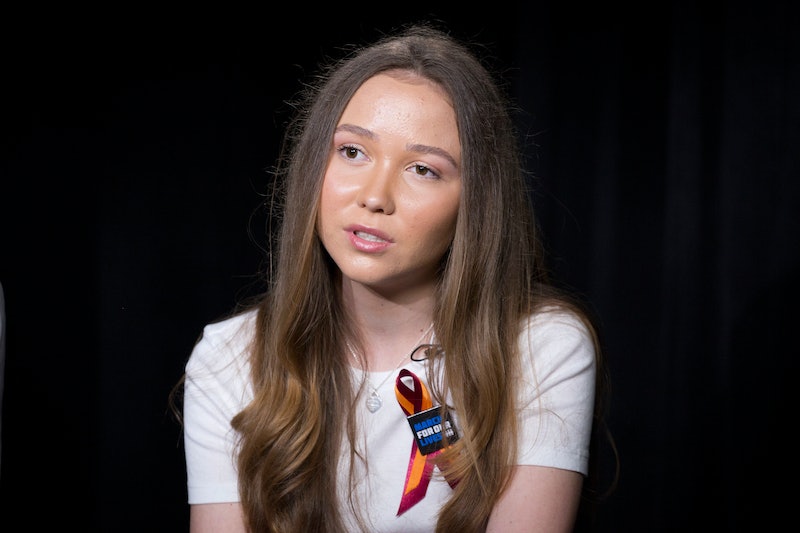 I’ve grown up in a time where I turn on the news every morning and I see mass shootings. I see horrible things happening and I think, much like other people, I've grown accustomed to it. My name is Lauren Hogg, and I’m 15 years old. People have always told me that one of the most important lessons to learn in life is how to get back up after being knocked down. After what I’ve gone through and what my friends have gone through, I think I’m learning that right now.

Like I say in my book Never Again, I was born after Columbine. It’s really unfortunate that it took something like the shooting at my school for me to realize that this isn’t OK. What I went through really inspired me to fight the gun lobby, and it’s really important for me to fight back with love, not with hate. Because I lost four friends that day.

Whether you’re Dana Loesch from the NRA, or whether you’re me, or my brother David, or Emma González, something we all have in common as humans is empathy and love. Using love instead of fear tactics, like so many do — including the gun lobby — I think that’s really powerful because it’s harder to do.

A few days after the shooting, I woke up to my phone buzzing and going off and dinging. I was like, "What is going on?" So I looked at my phone, and on my Instagram there were all these people who were writing horrific stuff. I looked on their pages, and it was just full of hate. I looked at what they were writing about me — it would be a picture with me and my dog, and they would be like, “Oh my god what a horrible person. Your whole family is going to hell. You’re a slut,” and all this stuff.

I was just kind of angry, and I hate the fact that I was so angry at that moment. But at the same time, I’m appreciative of my anger, because it’s what prompted me to send out that tweet to Melania Trump. It fueled my fire. It’s what kick-started me, because I was so numb at the time with everything that happened. That one push of anger was the catalyst to me becoming an activist.

Between me and David, I’m the really diplomatic one on Twitter, honestly. He thinks of posting stupid stuff sometimes, so I always check over it. When we were still in D.C. after March for Our Lives, we started getting all of these texts from our friends that Laura Ingraham had said something about David. And that time he was like, “Help me, how do I deal with this?”

I felt that the tables had turned in a way, because growing up, David’s always been that big-brother figure. He’s always been the one who protects me. But at the same time, I felt like because he’d done this my whole life, it was my responsibility. It was my turn to protect him.

If you look at who the country looks at as leaders — politicians and presidents — we don’t think of those people as leaders. We think of them as our allies. We think of them as our equals. I think that’s the reason why none of us really feel like we’re leaders. We’re just normal teenage kids trying to make the world a better one than the one we came into. We’re just trying to save peoples' lives. We’re trying to make sure that nobody else has friends, a mother, a brother, a sister, who dies or gets injured died because of senseless gun violence.

This summer, March for Our Lives is going on a Road to Change tour and we’re going across the country to over 70 stops in 20 states. We're hoping that we’ll make the change or the people that come after us will make the change so no kids like them, no adults, have to be taken because of gun violence. I think that’s what pushes us every single day.

I know if I was in their position, and they were in my position today, they would be fighting for me. So I feel like it’s my responsibility to fight for them and to ensure that no other tears have to fall because of this.