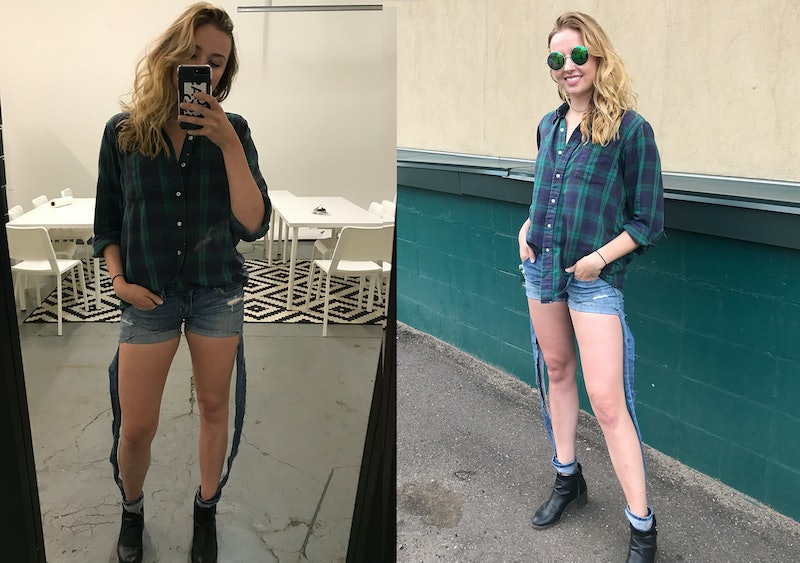 Kendall Jenner isn't afraid to take style risks. From her see-through Met Gala gown to nipple-baring sheer tops, the girl knows how to attract attention. One of her most recent ensembles definitely sparked buzz, mostly because no one knew what exactly she was wearing. Kendall Jenner wore ankle wrap shorts back in March, and Bustle and co. just had to know what it would be like if a mere mortal wore a similar contraption — I was that lucky mortal.

I wore Jenner's ankle wrap shorts to a happy hour, and my friends definitely thought I was weird; but that's not exactly unusual. Much like Jenner herself, I also enjoy taking fashion risks, although I can't say I've gone to as many extremes as the model. However, I have been known to wear some things in public that the average person might be a little hesitant to wear, like my furry pink slides (my friend Katherine refuses to be seen with me in public when I wear them because I "embarrass" her).

If you haven't seen Jenner's bizarre ankle wrap shorts, you'll want to scroll down ASAP so you have a little context. While out in Los Angeles, Jenner wore a pair of cut-off jean shorts that seem totally normal from the hem up, but upon closer inspection, the shorts are actually connected to her ankles via a strap, which makes me wonder — are these a pair of shorts with ankle straps or the most distressed pair of pants ever?

When the day finally came to wear my shorts out in public, I was a little nervous. These shorts are definitely weird. I'm a pretty confident person, but it's hard to be confident in what you're wearing when you don't exactly love what you're wearing. I can defend my pink furry slides. I can't exactly defend these shorts. Luckily, I was just going to a dive bar where distressed denim is the norm.

I had to give myself a pep talk before I walked outside in these shorts. I'm pretty sure I went through the five stages of grief before accepting that this is the life I chose and sometimes you have to wear ugly pants, er, shorts. For journalism.

When my friends (and former co-workers, #embarrassing) saw me in these shorts, they did not hold back. My friend Katherine could not believe I wore these out in public, asking me, "What happened to your pants? You're missing 85 percent of them! This is ludicrous." Another friend seemed angry that I was even wearing them, saying, "What the actual f--k? That is not right." Tough crowd.

Not everyone reacted as viscerally as Katherine, but they definitely had things to say. Although, seeing as I'm based in Minneapolis, a lot of people were very "Minnesota Nice" about it, saying things like, "At least they're better than those clear jeans," and, "You're expressing your creativity, and I like that."

A few people complimented my legs, which was a great way of getting around not complimenting my shorts. And my personal favorite was when someone asked me how I took them off. I even had one friend say she liked them.

Aside from feeling rather uncomfortable — more mentally than physically — in these shorts, I felt trapped. I was constantly worried that I would get caught on something. I wonder if this is how young children feel when their parents attach them to a leash.

No offense to Kendall Jenner, but this is not a trend I'll be rocking any time soon. However, I recently read an article in The New York Times that said people often don't notice the things you're self-conscious about (i.e. these shorts), so maybe no one noticed? Just kidding. People definitely noticed.

The moral of the story is to wear whatever trend you want as long as you like it. But maybe don't wear something just because Kendall Jenner or another celebrity wore it, especially if it makes you uncomfortable or you flat out just hate it. (Although, I would be willing to wear a bralette as a top, like she and sister Kourtney Kardashian just did in Cannes. Just saying.)