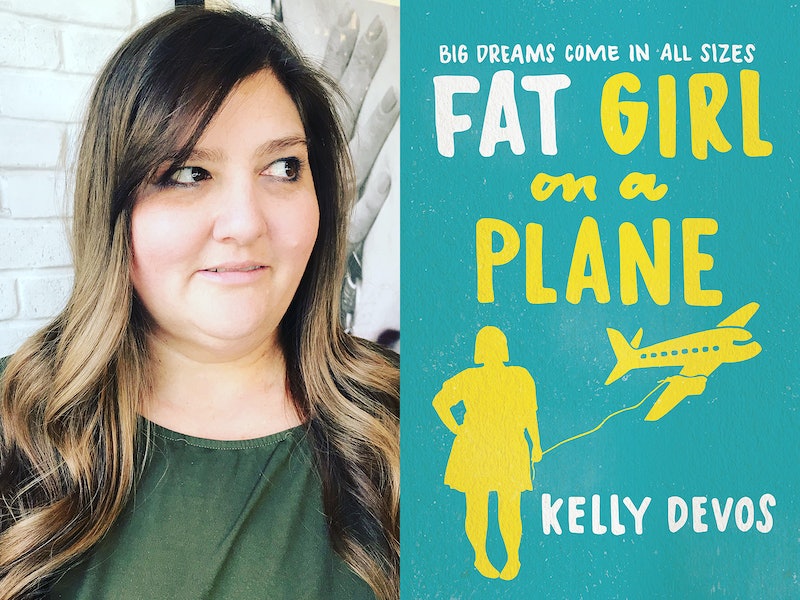 This year, Bustle is celebrating Rule Breakers — the women and non-binary individuals among us who dare to be themselves no matter what. In the lead-up to our list of Bustle's Rule Breakers of 2018 going live in late August, we are featuring stories from an array of individuals about critical moments when they didn't do as they were told. In a world that encourages us to conform unquestioningly, they refused to look or act the part, and we're all better for it.

By the fourth grade, I had two things: A deep love of reading and a nickname: Kelly belly with a big fat bowl of jelly in her belly.

Despite spending so much time in the school library that the librarian took to greeting me with, “Oh, there you are,” and keeping a small pile of new books behind the desk that she thought I’d enjoy, I rarely saw myself in fiction. Fat kids didn’t travel through the tesseract or discover magical wardrobes.

By then, I’d encountered precisely two fat characters. The first was Augustus Gloop from Roald Dahl’s Charlie and the Chocolate Factory. He is described as “enormously fat” and is also disastrously clumsy, falling into the chocolate river and disappearing early in the novel. The second was Linda in Blubber. As groundbreaking as Judy Blume’s book was in its day, it’s primarily a story of bullying with fat Linda mainly existing to teach an object lesson to the thin narrator, Jill.

I rarely saw myself in fiction. Fat kids didn’t travel through the tesseract or discover magical wardrobes.

There seemed to be a set of rules for fat characters in fiction. It was great to have them somewhere in the background, to be called upon for comic relief or teachable moments.

Then, the summer before fifth grade, I fell in love.

I discovered The Secret of the Mansion, the first in an old series of middle grade mysteries centered around 13-year-old detective, Trixie Belden, who fights crime in a small town in upstate New York. Trixie is never explicitly described as fat, but she is definitely coded that way. Throughout the series, she is consistently described as round, plump and sturdily built. She has relatable problems, like struggling to fit into a friend’s borrowed clothes at an unplanned sleepover.

For the first time, I felt seen.

But more than that, Trixie is a hero. She rides horses, skulks around in the woods and catches real criminals. Even though her friends include Diana Lynch, a purple-eyed girl supposedly modeled after Elizabeth Taylor in National Velvet, and tall, slim heiress, Honey Wheeler, Trixie is the star. She even has the best boyfriend — redheaded millionaire cutie, Jim Frayne.

I learned that fat people could be heroes.

But it was a lesson that I mostly forgot as I headed into adulthood and, once again, fat characters were few and far between. My favorite novel as a high school student was Jurassic Park. I still love Michael Crichton’s book for its thrills and chills, but the novel’s villain, Dennis Nedry, might be one of most stereotype-laden fat characters in contemporary literature. He’s fat, his work area is sloppy and littered with candy bar wrappers, he’s lazy, clumsy and wants to extort his employer for more money. Of everyone shown working in the Jurassic Park office, Nedry has learned the least about the dinosaurs at the park. He’s the only character in the book who enjoys eating. When he leaves to execute his inept scheme, his excuse is that he wants a Coke.

In that context, it was hard for me to imagine myself as a successful writer, let alone a hero. For many years, I let my dream of being a published novelist languish unfulfilled. I pursued a career as a graphic designer, working behind-the-scenes in the professional beauty industry.

In that context, it was hard for me to imagine myself as a successful writer, let alone a hero.

In a nod to that fact that I’d internalized some fat stereotypes over the years, the heroine of my debut young adult novel, Fat Girl on a Plane, Cookie Vonn, was born a sidekick. She started out as the plucky, snarky, fashionista BFF of a teen detective in a Hawaiian murder mystery that was my first project when I returned to writing. To me, this approach seemed to follow the unspoken rules.

My writer friends weren’t impressed by my detective’s attempts to find her mother’s killer but they kept feeding me notes like, “This character Cookie is awesome,” and “I’d read a whole book about Cookie.” I was honestly on the verge of giving up again when a personal experience changed my perspective.

On a business trip to Salt Lake City, I was forced to buy a second seat on the plane. The experience was spectacularly humiliating but it also made me think. I thought about all the times my weight had kept me from doing what I loved – how it made me afraid to travel to new places, how it kept me from feeling worthy of pursuing my dream of being a writer and how I often ended up behind the scenes and was more comfortable there. I wondered how many people were in the same boat. I realized I wanted to change my own story. I went back to school, finished my creative writing degree and got much more serious about my writing.

I also realized that Cookie was not a sidekick.

She was a hero.

I realized I wanted to change my own story. I went back to school, finished my creative writing degree and got much more serious about my writing.

I gave up the so-called rules and put her in a new narrative. Fat Girl on a Plane follows Cookie, now a teen fashion student, on her quest to be the next great designer. Inspired by my experience on the plane, I felt I had a real opportunity to highlight and discuss the difference between the way that fat people and thin people are treated by society. So I wrote the book in two timelines. I show Cookie before and after a major weight loss she falsely believes will solve all her problems. In the hope of helping young people avoid the many years I spent feeling unworthy of pursuing my dreams, I modeled many of Cookie’s experiences on things I went through as a teen.

Today, I’m thrilled to be part of a concerted effort to improve both the quality and quantity of fat representation in books — a mission being spearheaded by writers of books for young people. This year alone, YA novels with fat protagonists include Puddin’ by Julie Murphy, Amy Spalding’s Summer of Jordi Perez, The Universe is Expanding and So Am I by Carolyn Mackler, and Becky Albertalli’s Leah on the Offbeat. In the months to come, To Be Honest by Maggie Ann Martin and Mammoth by Jill Baguchinsky will follow.

I hope all these books will help show fat teenagers one important thing: They are the heroes of their own story. And they can make their own rules.