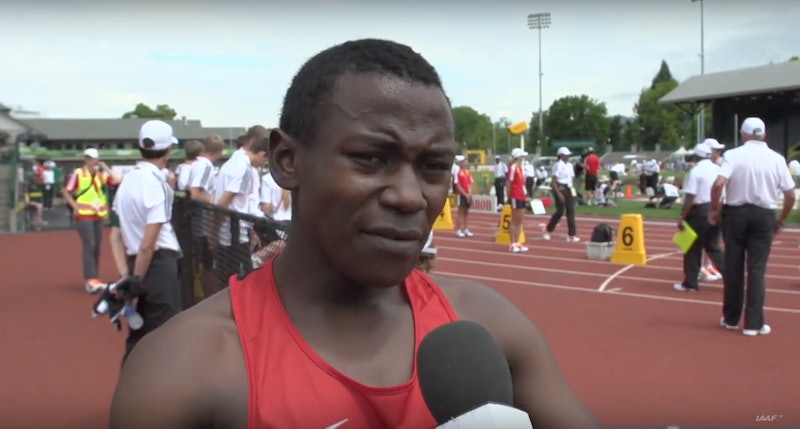 The International Association of Athletics Federations (IAAF) is coming under fire for a new rule that disqualifies women with high testosterone levels from competing — unless they take medication to suppress those levels. Just days after a South African Olympian lost a case challenging this regulation, IAAF testosterone rules have forced two Kenyan sprinters off of the country's team for the World Relays championship, AFP reported Friday.

Maximilla Imali, champion of Kenya's 100m and 200m relays, and Evangeline Makena, the 400m champion, have been dropped by Athletics Kenya from participating in the world championship in Japan this week after blood tests found high testosterone levels in their blood, according to AFP.

The IAAF first announced the new regulations in 2018, which place strict limits how high women athletes' testosterone levels can be in order for them to compete in women's competitions. Under the rule, a woman whose testosterone level is above 5nmol/L must take steps to reduce it — namely, by undergoing hormone treatments — if they want to be allowed to compete in women's races.

South African Olympian Caster Semenya sued the IAAF in the Court of Arbitration for Sport (CAS), the highest international sports court, in an attempt to strike down the new regulation, the New York Times reported. The World Medical Association urged the court not to uphold the rule, calling it "flagrant discrimination based on the genetic variation of female athletes [that's] contrary to international medical ethics and human rights standards."

In May, however, the court ruled in favor of the IAAF. Although it admitted that the new rules "are discriminatory," CAS nonetheless determined that "on the basis of the evidence submitted by the parties, such discrimination is a necessary, reasonable and proportionate means of achieving the IAAF’s aim of preserving the integrity of female athletics."

As such, the policy went into effect on Wednesday, although as BuzzFeed News notes, Semenya has 30 days to appeal the ruling with the Swiss Federal Tribunal. Nevertheless, Athletics Kenya told AFP that, based on the court's ruling, it had no choice but to drop Imali and Mekana from its lineup ahead of the world championship in Japan.

"We could not risk travelling with the two athletes after the recent IAAF ruling on the restriction of testosterone levels on female runners took effect on May 8," Athletics Kenya director of competitions Paul Mutwii told AFP.

Although CAS did uphold IAAF rule, it expressed "some serious concerns as to the future practical application" of the regulations, and said that its ruling "may change in the future unless constant attention is paid to the fairness of how the Regulations are implemented."

Specifically, the court cited the difficulty of finding "concrete evidence" that elevated testosterone levels actually confer an advantage to women running in 1500m and 1 mile events, and suggested that IAAF not implement the new requirements for that race. In addition, CAS said that "the side effects of hormonal treatment" could ultimately demonstrate "the practical impossibility" of complying with the rule.

In a statement to AFP, Imali was defiant, and pledged to continue competing without taking hormone therapy.

"This is a scheme to demoralise us," Imali said. "I am not ready to quit athletics, nor to take a suppressant treatment. I am so happy the way God made me to be."