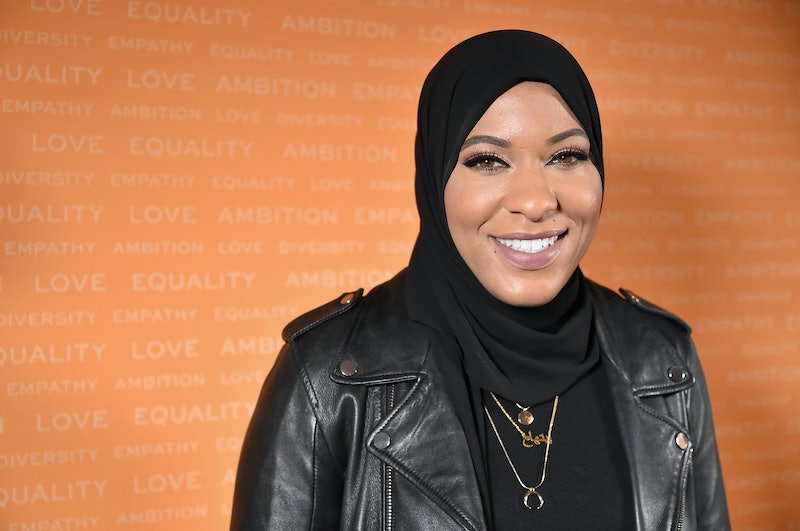 One thing is clear from her new memoir: Ibtihaj Muhammad was never going to let anyone stop her, even though many people tried. In Proud: My Fight for an Unlikely American Dream, she writes about how racism and xenophobia affected her childhood in New Jersey, her experience on the U.S. Olympic fencing team, and everything in between.

“I think that proud has been a sentiment that I learned to adopt from a really young age.” she tells Bustle of the memoir's title. “I never wanted to live under the stipulations of society’s limited expectations. I’ve always wanted to break free from this idea that there are certain things that I can and can’t do, depending on things like gender or religion or ethnicity. And I’ve learned that no matter what anyone says in all these moments, being proud is having confidence, and that is something no one can take away from me.”

As a kid, she tried many sports, but struggled to play in uniforms that did not conform to her faith. Then came fencing. As she writes in her book, “Once we were all suited up, I looked like everyone else, covered from head to toe.” She adds, "I chose fencing because it not only accommodated my religious beliefs, but… as an athlete I was really drawn to individual sport. I liked the idea of being solely responsible for the outcome of a match or a game."

"I’ve always wanted to break free from this idea that there are certain things that I can and can’t do, depending on things like gender or religion or ethnicity."

After graduating from Duke University, she expected to leave fencing behind and land a job in the corporate world. But despite sending out dozens of resumes, she wasn't asked back for many interviews. When she finally landed an interview at a prestigious multinational law firm, the man from HR made small talk before uncomfortably asking whether she would really fit in at their office given her "lifestyle." The months stretched on with no offers or job prospects, and Muhammad grew frustrated and depressed. She began working at a Dollar Store. Her days consisted of stacking shelves with dishwashing liquid and watching TV. One day, feeling lost, she paid a visit to her former high school fencing coach and asked for a lesson. Afterwards, he urged her to pursue fencing again on the international circuit — and possibly compete in the Olympics. But his encouragement was tempered with caution. “Being a champion is a long, lonely road,” he told her.

Proud: My Fight for an Unlikely American Dream by Ibtihaj Muhammad, $17.70, Amazon

He could have added grueling. She trained non-stop, paying her competition fees with her meager earnings from her job at the Dollar Store. (Eventually, she secured a substitute teaching job in Newark to cover the costs.) Through it all, she kept moving up in the rankings, and she finally earned a spot on Team USA. She was thrilled her travel and competition costs would be covered by the team, and excited that she was officially considered a professional athlete. She was also eager to bond with her new teammates, but as she details in her memoir, her attempts at friendship were rejected by much of the team. Instead, she writes that the team intentionally excluded her from team dinners and left her off practice emails.

Muhammad was at the top of her sport, yet she still felt like an outcast. "What I experienced was really difficult, especially as one of the few athletes of color in the sport," she tells Bustle. "The reason it was important for me to talk about my experiences and expose the underbelly of elite athletes, particularly within fencing, is because I am hoping it’s easier for the people who come after me. I want people to be more conscious of the way they treat others. And to know that passive aggressive behavior can be detrimental not only physically for an athlete but mentally as well. I know there were many times when it would have been far easier for me to walk away rather than push forward and continue to embark on this journey of qualifying for the Olympic team. And for black athletes, there’s a lot of pressure where often times we have to be exceptional in order to be accepted. I felt that when I was competing. When I faltered, it was front and center. It seemed to always be a topic for discussion. But when I was successful, it seemed to fall on deaf ears. There was no celebration. And not that you need it, but it can be really difficult to navigate these spaces with those moments.”

"The reason it was important for me to talk about my experiences and expose the underbelly of elite athletes, particularly within fencing, is because I am hoping it’s easier for the people who come after me."

Even though her story takes place against the backdrop of Olympic glory, it has the familiar sting of a hostile work environment. Muhammad offers advice for others facing the same situation. "I think the biggest act of rebellion, and the greatest act of resistance in this moment is to be unapologetic about who you are... I wish I had arrived at that understanding earlier in my career."

Ultimately, she trounced her teammate's low expectations, and earned a spot on the 2016 Olympics team. She competed in Rio De Janeiro, Brazil and was a member of Team USA’s Bronze-winning saber team.

Of course, Muhammad is an athlete, and much of the memoir focuses on her trials and tribulations in the sport of fencing. But, in some of the most fascinating tidbits from the book, she details her ongoing struggle to find fashionable modest clothing. As her star rose, she was invited to speak at more events. But she quickly grew frustrated with the the dowdy clothing options she was presented with. Despite her busy schedule, Muhammad decided to start a fashion line: Louella by Ibtihaj Muhammad.

"I remember being younger and really struggling as a kid who didn’t wear short sleeves and didn’t wear revealing tops or revealing dresses, and there was never a real option for me and my sisters if we needed a dress for an event or a dinner," she says. "So this idea just kind of blossomed in my family to create a line of clothing not just for ourselves but also for the many women that we know and that we don’t know that we were sure are experiencing the same issue. And to fill that void in the US market for affordable clothing that was modest and is ethically made."

It’s clear that Muhammad has become an icon beyond the realm of sports. In fact, Mattel just released the first hijab-wearing Barbie — inspired by Muhammad. "I never imagined I would have a Barbie doll! Not in a million years," she tells Bustle. "Dolls were an opportunity for me to imagine myself in different spaces and allowed me to dream and to not have any limit to what I was doing in that particular moment… I remember having dolls that weren’t diverse and that didn’t feel inclusive because my mom only bought me and my sisters black and brown Barbie’s, so if we went to the toy store and we already had the two Barbie’s on the shelf, we wouldn’t get a doll that day. So to have Mattel choose inclusiveness in this moment is a really strong statement on their part, because it’s far easier for people to stay silent. We see that played out every day.”

"Dolls were an opportunity for me to imagine myself in different spaces and allowed me to dream and to not have any limit to what I was doing in that particular moment."

Muhammad closes her memoir with a rallying cry: “I will continue to fight because the prize this time is an America that truly respects all of its citizens.” She once published an open letter to President Trump, who has used his platform to criticize athletes, to remind him that sports are an “equalizer and symbol of peace.” Despite our current political environment, she still feels that as an athlete and activist, she can overcome the divisiveness. "I think that’s the ultimate goal in using your platform," she says. "The hope is you are moving the needle and you can be an agent of change. Even if you are just changing one person."

Ibtihaj Muhammad’s journey is uniquely her own, and yet, it is one that many people will find relatable, comforting, and inspiring. “I hope people realize in their own time and their own ways they have everything inside to be great,” she says. "I think my story is one of struggle and triumph but also resilience. There was a lot of pushback in my career, even at the elite level, that I didn’t allow to dictate my journey or even how I felt about myself. I think that’s a hurdle we all arrive at some point in our life where there’s someone who doesn’t believe that you’re capable or doesn’t believe you have what you need in that moment to achieve a certain goal that you have set for yourself. I think it’s always important to remember that you don’t need other people’s permission to be great."

More like this
Pro Footballer Zander Murray Is "Blown Away" By Support After Coming Out
By Sam Ramsden
Romance Authors Are Mobilizing For Reproductive Rights
By Natalia Perez-Gonzalez
Mike Flanagan Teases 'The Midnight Club' In This Exclusive, Creepy Clip
By Grace Wehniainen
Aemond Targaryen's Fate On 'House Of The Dragon' Is Full Of Revenge In The Book
By Grace Wehniainen
Get Even More From Bustle — Sign Up For The Newsletter