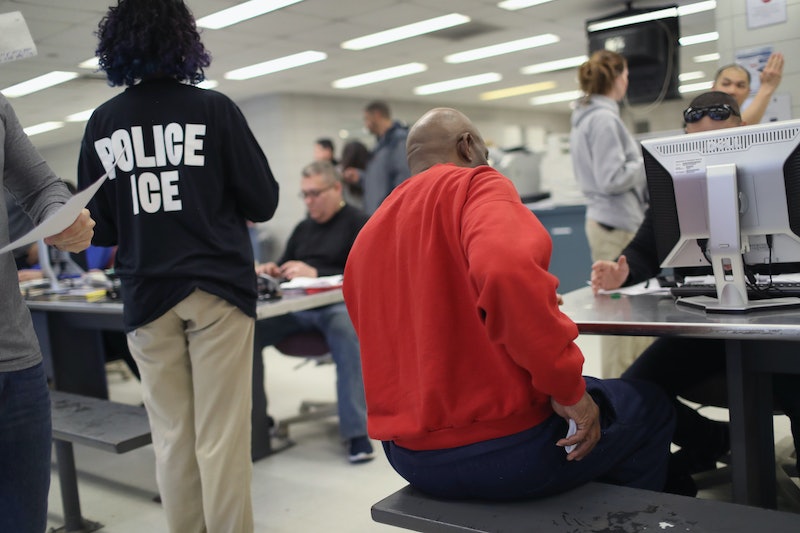 Migrants who are in Immigration and Customs Enforcment (ICE) custody are at risk of contracting a serious disease while living in detention centers, a new report on quarantining suggests. Some 2,000 migrants had been quarantined by ICE as of March 7, Reuters reported Sunday, some for illnesses as serious as mumps and the flu. Bustle reached out to ICE for comment.

According to Reuters, one of the last reported quarantines ocurred at Pine Prairie ICE Processing Center in Louisiana. A detainee there told Reuters how difficult quarantine was, when he was reportedly not allowed visits to the library, dining hall, or other public parts of the center. Not even his attorney was allowed into see him, despite the fact that his case continued, Reuters reported.

"When there is just one person who is sick, everybody pays," 19-year-old Christian Mejia said. He was locked down in his dorm after several cases of the mumps were reported. "We were locked in our bunkers — before, they would take us out to the dining hall, but due to the quarantine, they brought us food in disposable plates," he told TIME.

After that, Mejia was ordered sent back to Honduras — even though the time with his legal representation was reportedly limited due to the quarantine. They were finally able to see him in February after he complained, one day after he was ordered deported.

TIME reported that there were a number of clients both represented by the Southern Poverty Law Center and a group called ISLA that weren't able to reach their attorneys back in February. Attorneys said the situation became "disastrous" not just because they couldn't meet directly, but also because the detainees couldn't go to the law library, where much of the paperwork is kept.

The most prevalent diseases at the detention facilities are mumps, influenza, and chicken pox. Both influenza and chicken pox have numbered more than 400 cases each in the last year, while 236 people have tested positive for mumps — and that's in some 51 centers across the country.

Mumps can be very easy to spread, with saliva in the air being one form. That could mean a detainee with the disease coughs in the general area of another detainee, and that alone could spread it. Coughing, touching an object, and then another person touching it could also spread the illness.

U.S. Customs and Border Protection Commissioner Kevin McAleenan told Reuters that the high number of arrivals from Central America are to blame for so many illnesses. "We are seeing migrants arrive with illnesses and medical conditions in unprecedented numbers," McAleenan told the news agency. The countries of El Salvador, Guatemala, and Honduras, though, reportedly have high vaccination rates upwards of 90 percent, which would not explain the increase.

As for Mejia, he is appealing his deportation order. But, meanwhile, he could be deported at any minute. The detainees who are moved don't receive the same strict treatment to avoid spreading disease. As long as they don't have any symptoms, they're free to travel, Reuters reported.

More like this
Are John Legend & Kanye West Still Friends? The Singer’s Latest Update Is Candid
By Brad Witter
Rishi Sunak's Wife Is Worth More Than The Queen
By El Hunt
7 Things We Learned From Rebekah Vardy's First Post-WAGatha Christie Interview
By Sam Ramsden
What We Know About Where Caroline Watt Is Now
By Catharina Cheung
Get Even More From Bustle — Sign Up For The Newsletter