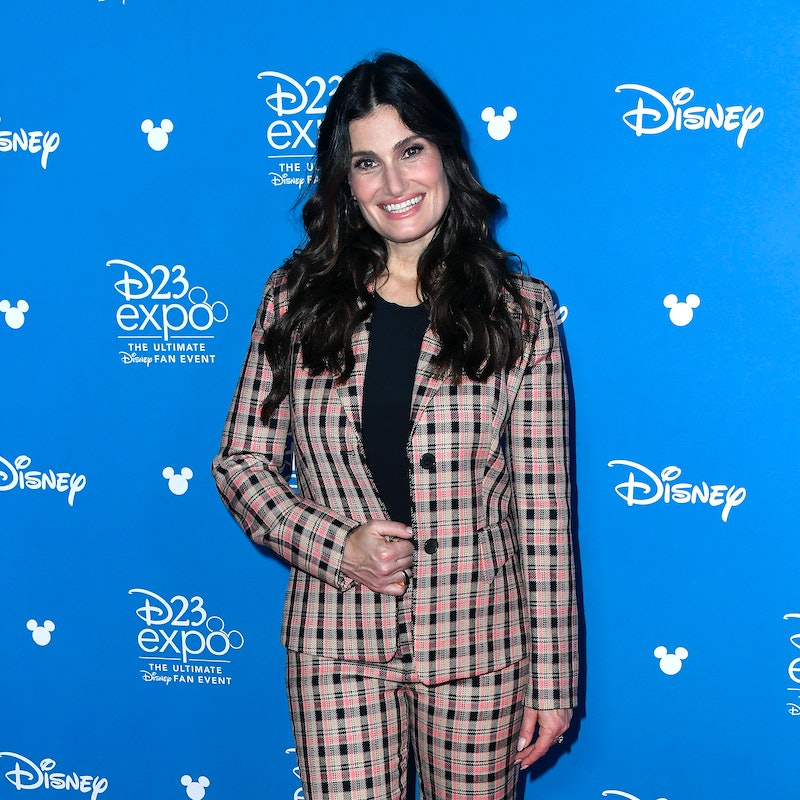 This news will give Anna and Elsa fans chills. In a recent interview with The Hollywood Reporter, Idina Menzel teased more Frozen 2 details. The sequel officially comes out on Nov. 22. For those who just can't wait over two months for the Disney animated movie's release, allow Menzel's latest comments about the upcoming film to tide you over until then. You're definitely going to want to hear what she had to say, especially if you can't get enough of Elsa.

It sounds like Menzel's character, Queen Elsa of Arendelle, will discover even more of herself in the second movie. Based on Menzel's description, Elsa will embark on an impactful journey. "Elsa has a calling," Menzel explained. "She's hearing this voice that's sort of calling her into the unknown. And it's kind of a quest to unveil some secrets of their past, but even more so to understand who she is and why she has the power she does, and what her purpose is in the world."

The Frozen 2 trailer doesn't give away too much about the plot and characters, but as a troll tells Elsa in the teaser, "The past is not what it seems. You must find the truth." He also says to Anna that they've always feared Elsa's "powers were too much for this world" and "now we must hope they are enough." And as the official movie description teases, "Why was Elsa born with magical powers? The answer is calling her and threatening her kingdom. Together with Anna, Kristoff, Olaf and Sven, she'll set out on a dangerous but remarkable journey." Well, that sure sounds ominous.

Whatever happens in the sequel, there's no doubt the movie will tell another epic story about Anna and Elsa. Plus, like Menzel told THR, there's even going to be unforgettable music to accompany the sisters on their next adventure. After the publication asked Menzel if the song "Into the Unknown" is the next "Let It Go," she answered, "'Into the Unknown,' and then there's another song called 'Show Yourself,' which is pretty spectacular as well. Everyone always asks is it the next 'Let it Go'? That's lightning in a bottle. All I know is this music really moved me when I heard it, and it moved me more when I was interpreting it."

Speaking of Let It Go, that song will always hit home for Menzel, especially since it sends a great message. "''Let It Go' — as much as it might be annoying to a lot of moms out there, and dads — it's one of the great gifts of my career," she admitted. "It’s given me a way of communicating and connecting with young people that brings me so much joy. And also, it's a reminder to a woman in her 40s who has to be a role model to young people to practice what you preach."

As for the rest of the cast, yes, Kristen Bell is voicing Anna again and both Jonathan Groff and Josh Gad made their returns as Kristoff and Olaf, respectively. Better yet, Sterling K. Brown and Evan Rachel Wood are part of the sequel, too. Brown is playing Lieutenant Mattias and Wood is voicing Iduna, Anna and Elsa's late mother.

Fans are probably going to love Frozen 2 and maybe just as much as or even more than the original. Only time will tell. But, you can't go wrong when you have another great Disney movie with a fabulous cast telling the story of two inspiring sisters who will do whatever it takes not only for one another, but their entire kingdom.

More like this
Rupert Grint Just Shared A *Major* Update About Ron Weasley’s Future
By El Hunt
Anne Hathaway Shared A "Thrilling" 'Princess Diaries 3' Update
By Darshita Goyal
Austin Butler Recalls Lisa Marie Presley Showing Him Elvis’ Bedroom
By Jake Viswanath
You’ll Definitely Recognise Isadóra Bjarkardóttir Barney’s Mum
By Maxine Harrison
Get Even More From Bustle — Sign Up For The Newsletter
From hair trends to relationship advice, our daily newsletter has everything you need to sound like a person who’s on TikTok, even if you aren’t.