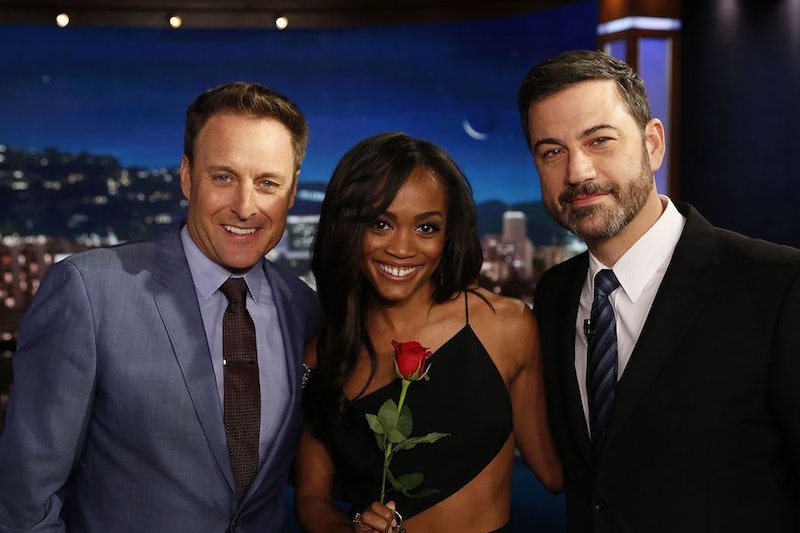 My Monday nights haven't been the same since Nick Viall's season of The Bachelor ended last month, but there is good news: Rachel Lindsay's season of The Bachelorette is right around the corner. After seeing a preview of what's to come when Rachel met the first of her guys on After The Final Rose, I'm even more pumped to see her potentially fall in love with the person she's going to spend the rest of her life with. But what if that person is someone Bachelor Nation is already familiar with? I have a feeling a Bachelor star could return to crash Rachel's season, and there are plenty of options.

Nothing's for sure until her season kicks off in May, but here are a few guys I am hoping show up this time.

OK, so this particular name on this list is definitely wishful thinking on my part, because Wells is one of my favorite Bachelorette contestants of all time. He's just so cute! And I think that he and Rachel could really get along, in an opposites attract kind of way. He's on the quieter side, which could mesh well with her take charge personality. Plus, he'd always make her laugh.

Guys, Chris Soules has been single for way too long. It's been years since he and his Bachelor final pick, Whitney Bischoff, ended their engagement, so it's time for him to get back in the saddle. And what better way to do so than going back to The Bachelorette, where he first began this journey? Being that he's gone for a lawyer before — Andi Dorfman, remember?! — she might actually be his type.

Ever since first meeting Christian on JoJo Fletcher's season of The Bachelorette last season, I've really liked him. He's always been such a sweet, low key guy, which could be perfect for Rachel, and since he walked away from Bachelor in Paradise without finding love last summer, he deserves another shot!

I'm not convinced that Luke would actually be the right match for Rachel, but I feel like it's definitely likely he could show up. Lately, Luke has been a little salty about not getting the Bachelor gig he thought he was a lock for, so I have a feeling he'd jump at the chance to get back in that Bachelorette mansion again... especially if it would potentially lead to another shot at being The Bachelor. Just a hunch!

I have been heartbroken for poor Grant since he and Lace Morris ended things last year. OK, so they definitely didn't make a lot of sense as a couple, but they did really seem to care about each other. If Grant's ready to date again, though, Rachel might be a good fit. She's nothing like Lace, but maybe that's exactly what he needs in his next relationship?

Now that it seems like his on again, off again fling with Ashley Iaconetti is officially done for, he should definitely give The Bachelorette another spin. Anyone who's been keeping up with the franchise over the past few seasons knows that Jared is a total sweetie who Rachel would be lucky to end up with!

I'm looking forward to meeting Rachel's new batch of dudes... and I'm hoping that some familiar faces are among them. It feels like forever between now and the May premiere, but hopefully, the cast will be revealed soon!

More like this
JoJo Fletcher & Jordan Rodgers Got Married In A “Playful & Fun” Wedding
By Grace Wehniainen
Rachel From ‘The Circle’ Season 4 Isn’t Usually On TV Shows With “Living People”
By Justice Namaste
What’s New On Netflix: A Victoria Justice Rom-Com & The Return Of David Letterman
By Arya Roshanian
Everything We Know About Chèrie & Jessey’s Abrupt Exit From Bling Empire
By Alyssa Lapid
Get Even More From Bustle — Sign Up For The Newsletter