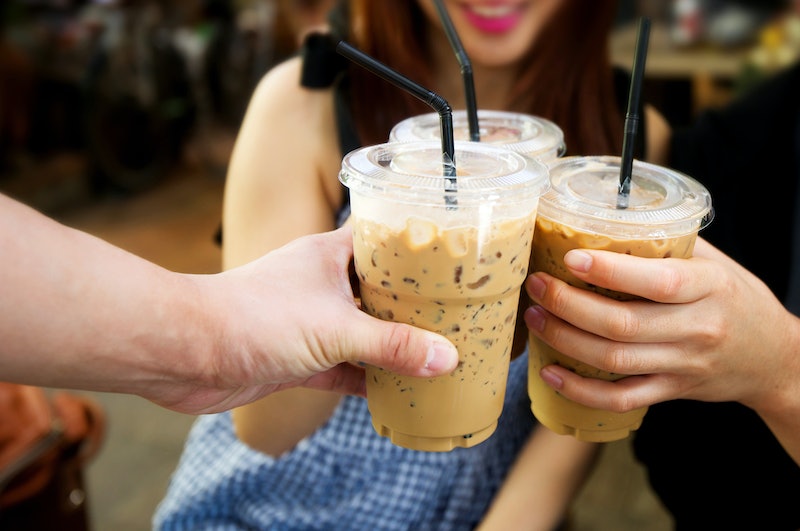 Cold-brew coffee is all the rage during a summer heatwave. If you're not in the know, cold-brew coffee isn't the same thing as iced coffee. And for some people, these differences can be unpleasant. But if cold brew coffee hurts your stomach, that doesn't mean you can't still sip a cup of cold coffee when the heat is on outside. Before we get into all of that, it's important to understand the differences between iced coffee and cold brew. Because even if you've been drinking cold brew on the regular, it's possible you think it's just another name for iced coffee. It's not.

Cold brew coffee has been around forever, but it hit the scene in a big way about five years ago when Starbucks started selling it. Unlike iced coffee, which is brewed hot and poured over ice, cold brew coffee is brewed with either room temperature or cold water over a 12-to-24 hour period, Chris Cross, a roaster at New York City’s Cafe Grumpy, told TODAY.com. This brewing method means the coffee is less acidic, and some java drinkers think it tastes smoother. However, some people on Reddit, as well as some I know IRL, claim the cold brew hurts their stomaches.

This could be in part because not all cold brew coffees are the same. Consumer Reports recently released a report that noted that some ready-to-drink cold brew coffees contain added sugar and sodium, which can def upset your stomach. What's more, because it takes twice as many beans to make cold brew, it's twice as expensive.

If you're one of the people who gets a sour stomach after sipping on a cold brew, stop the madness. There is no need to spend twice as much money on a coffee that makes you feel like poop. There's no shame in drinking regular iced coffee, and the upside is that it will cost you half as much. Some alternatives to chillin' with a cold brew include ordering an iced Americano or iced latte instead.

If you're worried that iced coffee isn't as healthy as cold brew, that's just a myth. On the website Nutritious Life, dietician Keri Glassman, M.S., R.D., C.D.N., said there is no solid research that shows cold brew contains more antioxidants than regular coffee.

While cold brew is less acidic, that doesn't mean it's any healthier than iced coffee. Because cold brew tends to taste smoother, drinkers may add less cream and sugar, which is basically the only thing that makes it a healthier choice.

Everyone is different, and what works for one person doesn't work for every person. If you've started feeling icky since you switched to cold brew, see if you feel better drinking regular coffee for a week.

If cold brew does a number on your stomach, there's no need to indulge in FOMO. You already know what you're missing, cramps and money. Get yourself a good, old-fashioned iced coffee like it's 1999 and use that extra cash to buy yourself something nice.