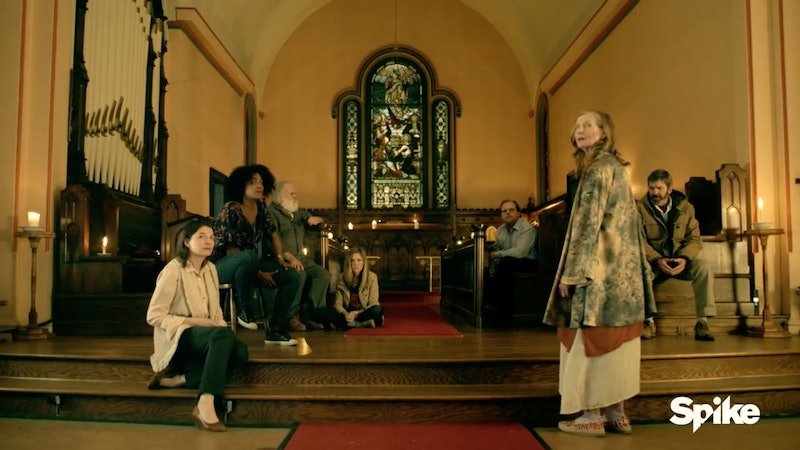 The adaptation of Stephen King's The Mist has spun 10 haunting episodes out of a horror novella that's less than two hundred pages long. But the series has such an inventive approach to the material that The Mist returning for Season 2 seems very possible. The series has yet to officially be renewed — or canceled — but the show's staff is already thinking about what another season would entail, if they get the opportunity to make it. And if the special-effects laden series is to return, it would likely be after a hiatus of around a year, to give the show time to plot out another haunting, mysterious season of social horror.

If The Mist does return, there will actually be a good amount of changes to the show. In addition to any shifts that will happen because of the source material running out, Spike, home of The Mist Season 1, will not be the place a hypothetical new season will come out. According to Deadline, Viacom is adding a new network, and The Mist Season 2 would be on the Paramount Network instead. Before The Mist premiered, Spike president Kevin Kay said, "In success, if this season on Spike goes well, we would pick [The Mist] up for next year, and Season 2 will be on Paramount. I think it looks very good, there is a big marketing campaign that is about to launch around it. We think it’s got a lot of potential, and it might join the Paramount Network."

Now, as for the story changes, showrunner Christian Torpe gave Moviepilot lots of hints, clues, and possible new storylines for The Mist Season 2 that show he has a plan to expand upon the original novel's mysterious, malevolent force behind the mist that rolls into the once-idyllic Maine town. Torpe cautioned, "It's too early to say if we will get a Season 2 or not, but as you can see from my answers, I have a plan and know what the madness leads to." That "madness" includes bringing back Project Arrowhead, which was hinted at during Season 1, but "the Season 2 storyline takes us much, much deeper into the Arrowhead projects and its possible connection to the mist itself," Torpe said.

The nature of the mist is deliberately left unexplained during the original novella, which is far more concerned with how the Bridgeville residents react to it than where it came from (though it is hinted that the soldiers working at Project Arrowhead know something the rest of the town doesn't). But in a TV series, there are hours to unravel the premise's central mystery, and Torpe told MoviePilot, "We wanted to treat the mist like a character. It has wants and needs and acts accordingly, but for Season 1, we will not be revealing (too) much of how and why. What exactly the mythology is and how it works is something we will start going more in depth with in later seasons."

The first season of The Mist may have began as another adaptation of the Stephen King story, but it sounds like the show plans to add its own mythos to the overarching story, and continue expanding Bridgeville beyond its original parameters — and it might be doing so on a new network in 2018.