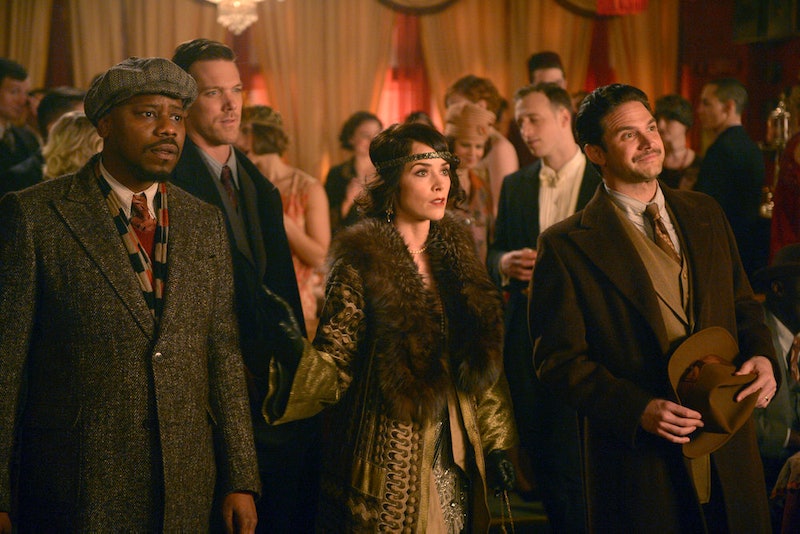 On Monday, Feb. 20, the first season of Timeless will come to an end, but I'm hoping it's not the only season this show will have. The new NBC series is one of the strongest programs currently on the air, and I'm obsessed with Lucy, Rufus, and Wyatt's time-traveling shenanigans. And the whole deal with Rittenhouse? This show is just getting started, and I need to know more in Timeless Season 2.

Unfortunately, there's no official confirmation on whether or not the show will return. Timeless is technically a bubble show in terms of ratings, but it has a passionate fanbase and so many story opportunities. After all, Doctor Who is still going strong after all these years. The bigger problem is that all of Timeless' amazing episodes and period-perfect scenarios come with a price — a literal price, as the show is a costly and complex one to make.

But let's not lose all hope. The first season was originally scheduled for 13 episodes, then in November, NBC bumped its order up to 16. That definitely means the network sees potential for the series, and to that end, I've already started thinking about the things I'd want to see in Season 2. Here are just a few events that I want Timeless to visit if it returns.

Who wouldn't want to see Lucy look around in awe while the first woman to take flight actually takes flight? And, OK, it would be cool to see Flynn and Rufus involved in some way, too. But mostly, I want Lucy to be star-struck at a historical hero.

This seems like a no-brainer in terms of where the show could go, and I'm honestly surprised it hasn't gone there already. Pearl Harbor is obviously one of the biggest and most important events in American history, and I can't imagine it's not on the radar for the Timeless team.

Timeless hasn't gone back this far yet, but what's stopping it? It would be such a treat to see the first Olympics ever. Maybe Wyatt could even participate (or not, considering how he likes to get himself in situations that he can't get out of...) Either way, I'd love to see Timeless show it can go back even further than the 1920s.

Again, though the show hasn't gone back this far yet, I'd love to see it take on some time periods that may not have as many singular big events, but had a big impact on history in other ways. And bonus points if they get Wyatt and Flynn to joust.

The Battle of Yorktown

Hamilton is such a cultural phenomenon, so why doesn't the team travel back to the time period of Hamilton's glory days? I'd love to see Lucy sitting in a meeting about the Constitution, or have the gang be around for "the room where it happens" as Hamilton, Jefferson and Lafayette talk about their plans for the Capital and banks.

The last queen of France definitely deserves some love from the Timeless time travel gang. And by provoking the unrest that led to the French Revolution, it seems like the perfect place to visit and engage in some conspiracy.

Obviously, this just scratches the surface of where Timeless could go in a second season. Hopefully, NBC will give fans another chance to travel back in time with the team every week.