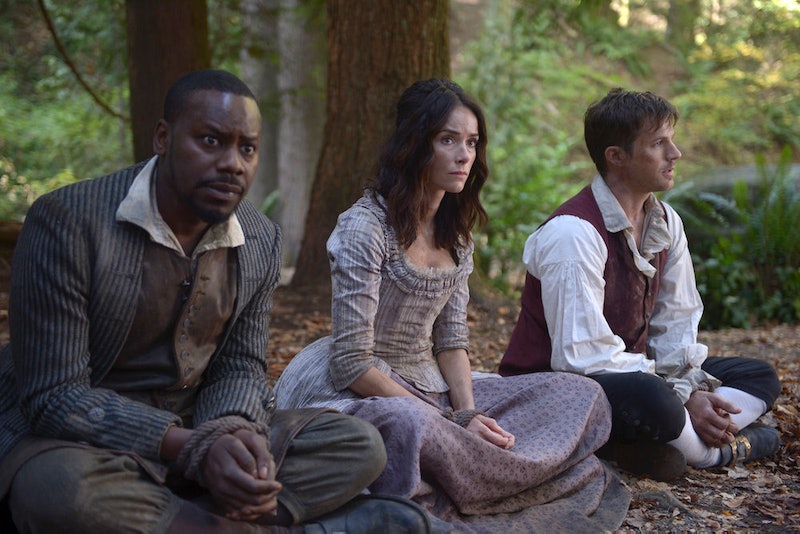 Although Timeless is one of the best new series on network television, it's not guaranteed a Season 2 at this point. Yet, fans of Lucy, Rufus, and Wyatt's time traveling adventures should be happy to know that Timeless will be returning in 2017 after a break for the holidays. The tenth episode, "The Capture of Benedict Arnold," airs on Dec. 12 and while there won't be another 10 episodes after the new year, knowing that Timeless will be back is something to rejoice about.

Originally, there were only 13 episodes of Timeless , but on Nov. 1, NBC released a statement that more episodes of Timeless were ordered. The president of NBC Entertainment Jennifer Salke said in the statement, "We're thrilled to be ordering additional episodes so that we can run the final six hours of the season in a row with no pre-emptions after the new year." While fans will certainly wish there were more than just six episodes left after this mid (ish) season break, it's understandable why there won't be 20 or more episodes of Timeless since recreating moments in history is a pretty expensive endeavor.

As for when it will be back with these six episodes, TVLine reported that you'll only have to wait a little more than a month since Timeless is scheduled to return on Jan. 16. Deadline confirmed this by saying that the Timeless Season 1 finale will air on Feb. 20. However, rather than time travel to when the first season is over, let's look forward to what will happen in the remaining six episodes. Here are a few theories about what could happen when Timeless returns in 2017.

The "Last Ride of Bonnie and Clyde" episode had Wyatt kissing Lucy as a way to trick the famous outlaws. Yet, the romantic tension between Lucy and Wyatt has been building since the beginning. Of course, Timeless won't put these two together in Season 1 – especially if the show gets renewed — but they sure are fun to 'ship, so let's keep the flirtation growing.

Lucy may have found out who her father is, but that doesn't mean that she connected him to Rittenhouse. If she doesn't discover that he's actually a big deal in Rittenhouse in Episode 10, let's hope she combines powers with Rufus to figure it out before Season 1 ends.

The Gang Works with Garcia Flynn

Although Lucy, Wyatt, and Rufus have been tasked with taking down Flynn, Rittenhouse is the real threat. Flynn may be a wild card and can't necessarily be trusted, I'd love to see Lucy get more intel from him (courtesy of her journal) about why she'll be working with him in the future. And Rufus should really find out why Anthony has agreed to work with Flynn too.

Since the series revealed that Agent Christopher has a daughter and she started sniffing around Rittenhouse, I'm very nervous for her fate. Like Rufus said, she's a good, decent investigator and someone who they need on their side as they journey through time, so let's hope that not only does Rittenhouse not kill her or her daughter, but that she stays on the assignment.

Rufus Breaks His Ties To Rittenhouse

Speaking of Agent Christopher, Rufus was about to give her the intel on what he knows about Rittenhouse. He has already been betraying Connor Mason and Rittenhouse when it comes to the information he provides them, but it would be great for his character development if he was able to stop working for them completely. Something tells me that won't happen in Season 1 though since Rittenhouse is extremely powerful, so, for now, it's better for Rufus to play along.

Someone Comes Back from the Dead

In "Atomic City," Wyatt attempted to send a message to his wife to stop her from dying in the future. It didn't work, but with the show focusing on Wyatt's wife so much, could one of their time jumps bring her back? If not Wyatt's wife, there's always Lucy's sister Amy, who stopped existing after the group's first trip back in time to the Hindenburg. Either one of these characters coming back would strain Lucy and Wyatt's budding relationship, so what a perfect note to end a first season on.

Let's hope some of these plots happen when the series returns in the new year, but far more importantly, let's hope that Timeless comes back for Season 2.