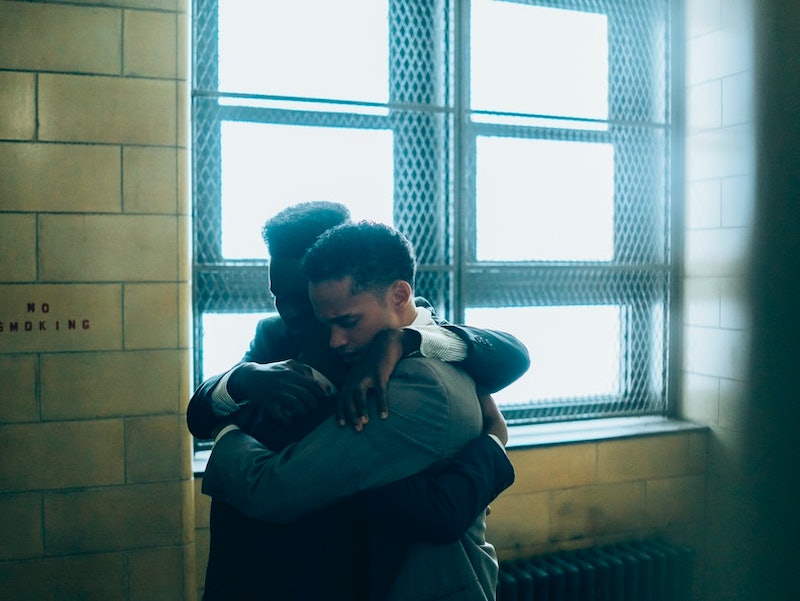 In this op-ed, Nia Ita, an educator-activist and writer, explains what it felt like watching When They See Us, the Netflix miniseries about the Central Park Five case, and what you can do next if you're ready to take action.

The Sunday after When They See Us premiered, my husband clicked through our TV apps, and the sound of Netflix opening filled the room. I didn’t want to watch it. A mix of discomfort and anger swirled inside me before the opening credits appeared on the screen.

Without thinking, I opened my laptop and only half-listened as my husband watched the four-partWhen They See Us, directed by Ava DuVernay. The miniseries is based on the 1989 Central Park jogger case that led to five teenagers — Kevin Richardson, Raymond Santana, Antron McCray, Yusef Salaam, and Korey Wise — being arrested, charged, and convicted for a brutal rape and assault they had nothing to do with.

Instead, I Googled organizations that work with incarcerated youth. I searched for opportunities to donate, volunteer, and spread awareness. I needed to feel like I was doing my part to be a responsible citizen who thinks about the people who live on the margins of society and continue to be criminalized and targeted.

The click-clack of my keyboard was furious. Maybe that was part of what snapped my husband, a Black man who grew up in America, out of his trance. He turned to me and asked, “Can you please just be present? I need you to feel this with me.”

It was obvious what I was trying to avoid: despair. Heartbreak. Grief so heavy it threatened to completely unravel me from the inside out. “Fine,” I responded, closing my laptop and pushing it toward my side of the couch. I stared at the TV screen for less than 15 seconds before hot tears started streaming down my face and onto my lap.

The rest of the night was unsparing as we binge-watched the series in one evening (something I do not recommend for the sake of your mental health). We each had moments where we had to walk away from the TV. While it took me a few days to come down from the heightened state of emotion, I can tell you that this is a necessary piece of cinematic storytelling that everyone, especially white people, should watch.

This is not the first, or the only, case that exposes the broken criminal justice system in the United States. Accused of stealing a backpack at 16 years old, Kalief Browder spent three years at Rikers — two of them in solitary confinement — without ever being convicted. Marquis Dixon was 16 years old when he was sentenced to nine years behind bars for stealing a pair of sneakers.

So what do we do with this despair, whether it’s sparked by the retelling of a tragic chapter in history or the frightening reality of today? Here are some productive steps you can take to move from awareness to action.

The Breakdown is a podcast hosted by journalist Shaun King that explores "stories of injustice, racism and corruption." Episodes 45-47 talk about the Central Park jogger case and sparks a "renewed fight against old injustices," as its description states.

The three-part series discusses the history that led up to the case and prosecutorial immunity, and then provides steps for anyone looking to take action. Listening to the three episodes combined takes no more than 45 minutes.

One of the organizations I came across in my Google search was Youth Represent. Youth Represent is credited as “a non-profit organization dedicated to improving the lives and futures of young people affected by the criminal justice system.” Its main focus is on leveraging the legal system to help youth who carry the burden or even just the possibility of a criminal record.

Donations directly fund housing (arrests can lead to evictions from public housing), help advocate for youths who need assistance in suspension and discrimination cases, and allow for high-quality, free legal representation in court.

Raymond Santana was only 14 years old when he was arrested in connection with the Central Park jogger case. He served six years before being released, and it was actually one of his tweets that inspired DuVernay to start working on When They See Us. In 2018, Santana launched the clothing line Park Madison NYC.

One of my favorite products is a T-shirt that lists all the names of the “Central Park Five.” I never thought about how continuously calling them this erased them as individuals. Their names are important and they matter.

In a post on Santana’s Instagram page, he wrote that a portion of the proceeds from this shirt in white will be donated to the Innocence Project, an organization whose sole mission is to free individuals who have been wrongly convicted and remain incarcerated.

Read A Book By Attica Locke

In 2018, Attica Locke, who was credited as a writer for When They See Us, won a Mystery Writers of America Edgar Award — one of the “most prestigious awards” in the mystery writing genre — for her fourth novel, Bluebird, Bluebird. One year later, Mystery Writers of America announced it would honor Linda Fairstein, the prosecutor who oversaw the Central Park jogger case, with a “Grand Master” award.

Locke was the first to express concern and request that Mystery Writers of America reconsider the honor. Locke’s Twitter thread went viral, and the organization rescinded the award after much controversy. Supporting POC art, especially from individuals like Locke who actively work to disrupt institutionalized racism, is a great way of taking action.

District attorneys manage the local prosecutor's office, investigate alleged crimes in cooperation with law enforcement, file charges, and bring evidence before a grand jury. They basically represent the government in criminal prosecutions, and they have absolute immunity, meaning they are protected should they engage in any misconduct. The portrayal in When They See Us of District Attorney Elizabeth Lederer — who just resigned as a law school lecturer after the series prompted backlash — was no exaggeration.

A district attorney race is happening right now in the New York City borough of Queens. There are seven Democrats running in the primary election, one of whom is a public defender who has been endorsed by Rep. Alexandria Ocasio-Cortez. The last DA election in Queens took place 30 years ago.

Do the work to inform yourself about who is serving in your local prosecutor's office and what elections are taking place. Do some research, and give a damn about what is happening with your local politics.

The Know Your Rights Camp (KRYC), founded by Colin Kaepernick, is a campaign that empowers kids and takes place twice a year in different cities. Young people are provided with resource guides and free workshops on higher education, eating healthy, financial literacy, how to properly interact with law enforcement, and so much more.

To support KRYC, you can donate directly on their site or purchase some of the camp or #imwithkap apparel. All of the proceeds go to funding KRYC, which is a wonderful way to remind our youth that they have rights. They have the right to be free, happy, alive, safe, loved, and educated. You can also follow the campaign on Twitter and Instagram @yourrightscamp.

Korey didn’t want prayers. In the When They See Us scene where he finally sees his mother after being in solitary confinement for who knows how long, he asks if anyone wrote or called for him and screams, “Please come see me more. Please come see me.”

Adopt an Inmate is a nonprofit volunteer organization that connects outside volunteers with prisoners seeking mentors, support, and friendship. To apply, simply click on “Adopt an Inmate” on the homepage and fill out a quick survey about yourself. This information is used to identify potential matches, which will be emailed to you within 24 hours. You can choose more than one person and once you confirm, you will be sent their contact information and everything you need to begin a correspondence.

Prison Activist Resource Center (PARC) describes itself as “a prison abolitionist group based in Oakland, California, that is committed to exposing and challenging the institutionalized racism, sexism, ableism, heterosexism, and classism of the Prison Industrial Complex.”

It has put together a guide of nationwide organizations and resources that you can look through to identify other ways of contributing toward the fight against mass incarceration.

When I finished watching When They See Us, I was sickened by what our criminal “justice” system had done to these boys. All of the anger, heartbreak, and hopelessness was valid. As I continue to work through the waves of residual emotions, I remind myself how much more access to information we have today than we had in 1989. I thought about why DuVernay chose to produce this project. And I was certain of one thing: We must be intentional in using the tools we have access to in order to bring meaningful change to our youth, our communities, and the systems of power in place.

More like this
Yinka Bokinni Recalls Terrifying Truth At Heart Of 'How To Hire A Hitman'
By Frances Stewart
The Families Of Grenfell Tower Are Still Waiting For Justice, Five Years On
By Bustle UK
Where Is Oscar Torres In 'Only Murders In The Building' Season 2?
By El Hunt
'Sherwood’s Filming Locations Hold Deeper Meaning
By Rachel Mantock
Get Even More From Bustle — Sign Up For The Newsletter