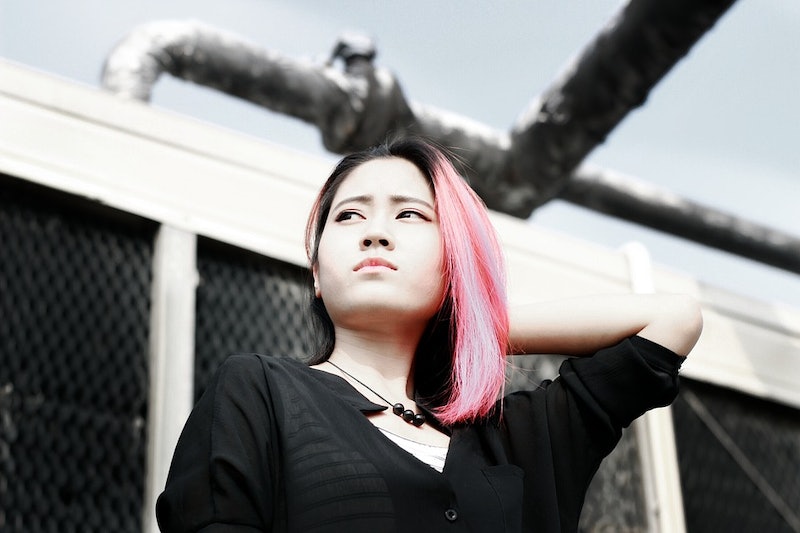 There are enough misconceptions about mental illness to fill up the entire Atlantic Ocean — twice. People who have never experienced lifelong problems with their mental health don't understand what it's like to live with an anxiety disorder, yet they're the ones who tend to pass judgments about how to live with this mental illness. They sometimes say it's nothing more than being constantly worried or "just nervous" in social situations, as if we could just turn it off if we just tried hard enough.

Considering how common anxiety is among Americans, we all should really be better-educated on the topic. Anxiety disorders are the most common mental illness in the U.S., currently affecting over 18 percent of the adult population, about 40 million individuals. Ranging from post-traumatic stress disorder (PTSD) to Generalized Anxiety Disorder (GAD), they're all treatable mental illnesses that often go either ignored or completely misunderstood. Only a third of people suffering from an anxiety disorder are getting the treatment they so desperately need.

Bustle spoke with Jodi Aman, a licensed psychotherapist and author of You 1, Anxiety 0, who says there is a lot of misunderstanding around people who live with anxiety. As a result, "they feel invisible, different, ostracized, alone," Aman says. "They may judge themselves and think they they need to take care of it on their own."

When we learn what anxiety is really all about, we have a better shot at properly treating people with the disorder, and we also have a better chance at relating to them. Here are six reasons anxiety is so much more than just being nervous.

Nervousness Goes Away When The Stressor Disappears — Anxiety Doesn't

If you don't have an anxiety disorder, you may feel nervous, stressed, or worried when there's something in your environment that causes these sensations. For example, you feel pressured at work, you're stuck in a fight with someone you care about, or you're about to walk on stage in front of hundreds of people. However, when this "stressor" goes away or ends, so do your feelings of nervousness.

This isn't the case for people living with anxiety. "They are suffering much more," Aman says. We would love to stop feeling anxious when the "stressor" is removed, but the very heart of an anxiety disorder is the fact that the anxiety is ongoing, and it appears for no particular reason. This is what makes it extremely difficult to live with anxiety; while you can usually predict the next time you'll feel worried about something, individuals with anxiety can't control when it will creep in.

Anxiety Has Noticeable Physical Side Effects

"The physical symptoms are stronger" for people suffering from anxiety, according to Aman. When anxiety takes over, it shows up in the body. We may experience physical ailments like headache, nausea, dizziness, and unusually frequent urination. People with anxiety disorders even have trouble simply breathing sometimes. Being simply nervous doesn't usually produce these kinds of symptoms.

Anxiety Has Different Neurological Functions Than Nervousness Does

The same hormones sometimes cause nervousness and anxiety, but the way the body processes each is quite different. According to the Harvard Women's Health Watch, there's a particular anatomy of anxiety that affects neurological function. Anxiety is said to arise in the amygdala, the part of the brain that's responsible for survival instincts, strong emotions, and memory. Because anxiety is so persistent, the neurotransmitters then carry this signal down through the sympathetic nervous system (also called the "fight or flight" response).

As a result, blood flow is diverted from the internal organs to the brain, which makes us feel weak and, in some cases, ill. Our muscles tense up and our heart rate increases, causing our breathing to become more rapid as well. It's as if the entire body is on alert to face an extreme danger.

Being temporarily stressed or nervous, though, doesn't biologically put your body in the same threatened state of awareness. You may feel worried and perhaps a little sweatier than normal, but you don't experience this kind of heightened neurological response.

Anxiety Is A Mental Illness That Runs In Families

Being nervous about something is a situational, circumstantial occurrence. However, many people have a genetic predisposition to developing anxiety in their life because it's a condition that runs in the family. Just because your parent has anxiety isn't a guarantee that you'll have the same issues in your lifetime, but if you have a mental illness there's a strong likelihood someone in your family also has it.

In a study published in the journal Proceedings of the National Academy of Sciences, researchers found that, when they reviewed brain scans of anxious rhesus monkeys, 30 percent of the cases could be attributed to family history. Another study from Molecular Psychiatry surveyed the genes of 1,065 different families, only to find very similar results. In a person who inherits a predisposition to have anxiety, 30 to 40 percent of the variability is from genetic makeup.

In other words, while everyone gets nervous from time to time, anxiety can be passed down in families much like hereditary diseases such as cystic fibrosis, Huntington's disease, and Alzheimer's.

Living with untreated anxiety can have some serious consequences on your health. The American Psychological Association says anxiety increases your risk for a heart attack or stroke, and studies have found that people with anxiety who already suffer from heart disease are twice as likely to have a heart attack. Chronic anxiety can also cause damage to your kidneys and blood vessels, due to the unhealthy spikes in blood pressure.

There's even a correlation between anxiety and irritable bowel syndrome (IBS), and although the recent research conducted on the gut-brain connection doesn't say anxiety directly causes IBS, it can certainly cause spasms in the colon that worsen the symptoms.

In short, people with anxiety don't just get high-strung from time to time. Their mental illness has a very real, potentially dangerous effect on their overall health. If it's ignored, their risk for disease, injury or, worse, death increases significantly. Simply getting stressed out or nervous on occasion, on the other hand, doesn't have a lasting effect on your health.

Anxious Feelings Can't Be Willed Away Or Controlled

When you're placed in a stressful situation, you can alter the environment in a way that will reduce the tension. You either walk away from what's happening around you, or you calm yourself down until you feel better. That's not how things work for people with anxiety, though (although we very much wish it did). Anxiety disorders feel like a beast because they're uncontrollable. Just because we're not having a full-on panic attack right in front of you doesn't mean we're not struggling internally.

"People see things from their own experience," Aman says. "They define these words differently." Although the terms nervous and anxious might mean something to you, never assume they hold the same exact meaning for people with anxiety. Every time you reduce our illness to just being nervous or worried, you diminish our experiences and make it sound like we don't need help, when the truth is, we need all the help we can get.

More like this
Ashley Benson Revealed The Whole-Body Effects Of Her Anxiety On TikTok
By Stephanie Topacio Long
The 5 Best Pillows For Acid Reflux, According To A Sleep Expert
By Maria Cassano
Here's How To Support Jewish People Amid Rising Antisemitism
By Hannah Orenstein
The 10 Memes That Defined 2022
By Alexis Morillo
Get Even More From Bustle — Sign Up For The Newsletter