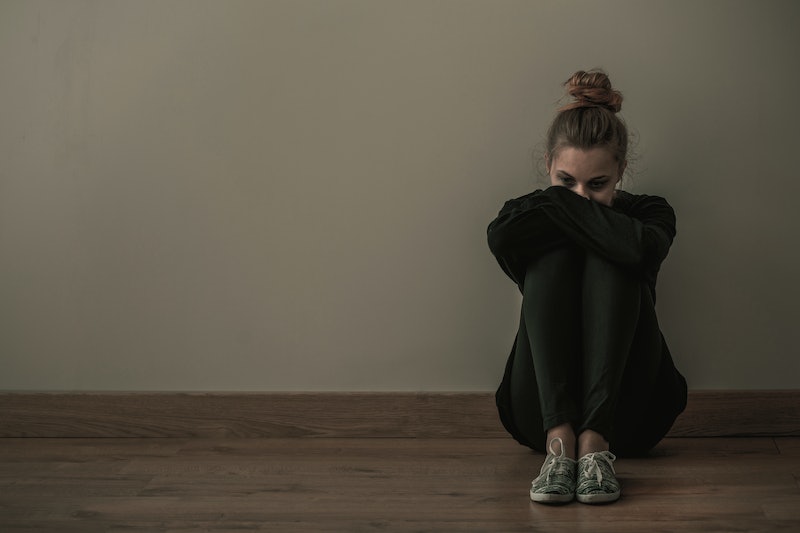 Have you ever felt painfully stuck on a thought loop in your head? While it's common to go through periods where you think about a particular issue, scenario, thing, or person a whole lot — there is a difference between fixating on something and having obsessive compulsive thinking that truly intrudes on your life and peace of mind. If the latter sounds familiar, know that you aren't alone, and there are both ways to tell if OCD is an issue for you, and the things you can do to cope with the symptoms.

As Tamar Chansky, Ph.D., founder of the Children's and Adult Center for OCD and Anxiety and author of Freeing Your Child From Obsessive Compulsive Disorder, tells Bustle, OCD is a disorder where you have intrusive thoughts that are “unwanted, time-consuming, and can cause distress.”

"In other words they barge into your thinking when you don’t want them to," Chansky says. "It’s different from being upset about something about your life and you feel stuck in a loop thinking about it."

That is unpleasant too, Chansky says, but with OCD, often the content is not really relevant to your life. It may feel strange. You might be thinking about harm, contamination, being a bad person, or the evenness of items around you.

"The other part of OCD is that people do 'compulsions' or rituals to neutralize a thought," Chansky says. "OCD makes an obstacle course for its sufferers, making them feel like they need to repeat, redo and rethink things that are not needing to be on their worry list at all," Chansky says.

"The core issue in OCD is unwillingness to accept certain kinds of uncertainty," counselor Stephanie Woodrow, LCPC, NCC, who was recently named an emerging leader by the Anxiety and Depression Association of America, tells Bustle.

Obsessions are recurrent, persistent, unwanted, and intrusive thoughts or images that are disturbing and cause marked anxiety or distress, Woodrow says. The compulsions or rituals that accompany them for people with OCD are mental behaviors aimed at reducing distress, anxiety, disgust, or a “just not right” feeling.

Some of the common OCD themes include things like contamination with germs or bodily fluids, perfectionism, unwanted sexual thoughts, fear of illness, or superstition. And some of the common compulsions or rituals are things like checking and reviewing, seeking reassurance or confessing, thinking a safe thought, or ordering and arranging things, among many others.

Woodrow says that while research suggests a person must have a biological vulnerability in order to develop OCD, at this point researches don’t know what causes the “OCD gene” to kick in. But she does reiterate that "people do not cause their OCD, and neither does parenting."

Woodrow says that options for treatment are extensive — they can include medications, outpatient, inpatient, or partial hospitalization therapy programs, mindfulness practice, and a variety of therapeutic modalities like Cognitive Behavioral Therapy (CBT).

Elise Hall, LCSW a clinical social worker with a private practice specializing in the treatment of OCD and anxiety disorders tells Bustle that "the gold standard" for OCD treatment is Exposure & Response Prevention, wherein a trained therapist guides you through different exposure tasks to help your brain and central nervous system learn that the feared outcomes of the obsessive thoughts are unlikely and/or tolerable.

Chansky says too that professional help is definitely the way to go when you suffer from OCD. But on the day to day, a first step is to relabel the thought you are having as not being about you, and not being your fault.

"It’s a brain hiccup that is said in words, but still as meaningless as a hiccup," Chansky says. "You need to train yourself to 'under-react' to the frightening thoughts because they only carry the weight you give them, they have no authority in your life unless you give them that attention."

Of course, that doesn't mean that recognizing that the thoughts are obsessive will make them disappear. It can be a long process, Chansky says. But one of the treatments for OCD is to essentially start skipping or “breaking the rules” of what your OCD brain is telling you what to do.

"Over time, as you stop tapping, touching, redoing, washing etc., via neuroplasticity, your brain re-learns that those warnings are unnecessary and starts filtering them out," Chansky says. "Don’t avoid the OCD situations — face them, and change the rules gradually shaping your actions to how you would want to respond if you didn't have OCD."

Chansky says that if you're even struggling with non-OCD thoughts getting stuck on a loop, it’s good to use neuroplasticity there too.

"Rather than jumping into worry mode whenever a thought comes in your mind, compartmentalize, create structure, and worry on a schedule rather than having those thoughts interfere in your work day," Chansky says. "If you can’t kick the worry habit entirely, set a time for worrying 5 minutes where you name your fears and then fact check them."

We have to shift out of worry mode intentionally to see that it is not useful to us, Chansky says.

If you're concerned that OCD might be an issue for you, reach out for professional help. It is a treatable disorder — and you can find relief.

Tamar Chansky, Ph.D., founder of the Children's and Adult Center for OCD and Anxiety and author of Freeing Your Child From Obsessive Compulsive Disorder.

Elise Hall, LCSW a clinical social worker with a private practice specializing in the treatment of OCD and anxiety disorders.