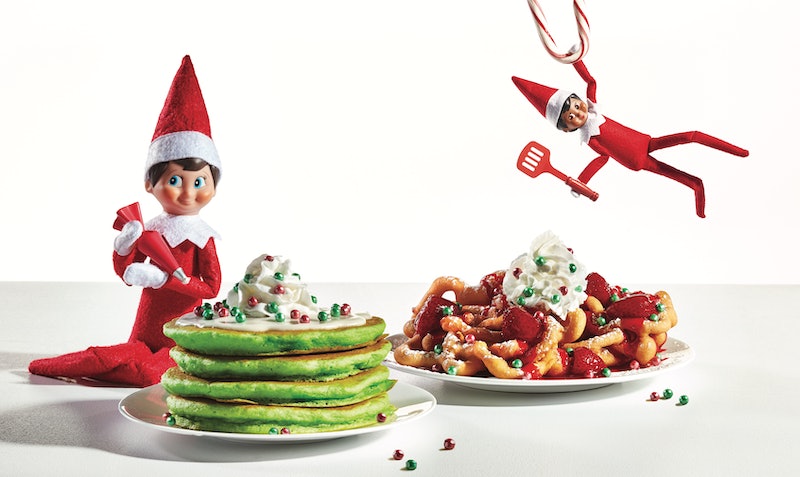 God only knows what Santa is up to these days, because in true form, he's letting the younger generation take up the slack. At a mere fourteen years old, the Elf on the Shelf seems to have the weight of the entire Christmas season on his little stuffed shoulders — which includes, and is certainly not limited to, IHOP's Elf on the Shelf menu, which is already available at IHOPs nationwide. That's right, y'all — it may be November, but it's never too early to turn your intestines red and green in the name of the holidays.

It seems that elves all have similar culinary tastes, because this cuisine from the North Pole is certainly Buddy the Elf-approved. The big ticket menu item are the bright green Jolly Cakes, which, per IHOP, are "topped with sweet cream cheese icing, whipped topping and shimmery elf sprinkles that resemble elf-sized ornaments." Also for those of us with sweet teeth out there are the Oh What Funnel Cakes, which are "topped with glazed strawberries, whipped topping and shimmery elf sprinkles." (What makes something an "elf sprinkle" is yet to be determined, but if you happen to ingest one and discover what the secret is, please advise.)

For elves looking for heartier fare, there's the Holiday Ham & Sausage Omelette, which is "loaded with diced ham & sausage, fire roasted peppers & onions, hash browns and Jack & Cheddar cheese, then topped with more diced ham & sausage, Cheddar cheese and White Cheddar cheese sauce," and comes with three pancakes and a side. Admittedly a little less thematic than its elf menu counterparts, at least you can wash it all down with Merry Marshmallow Hot Chocolate, which is "flavored with toasted marshmallow syrup and topped with whipped topping and shimmery elf sprinkles." You can also order a small version of the pancakes or funnel cakes in a Little Elves combo that comes with a scrambled egg and either a sausage link or slice of bacon.

In the midst of all this elvish culinary chaos, IHOP is getting its own "Scout Elf" that will be hidden in restaurant locations and getting into holiday shenanigans — so if you manage to take your eyes off the majesty/monstrosity that is a giant pile of green pancakes, keep them peeled for that. And make sure you drop in before Jan. 1, 2020, when the Elf leaves its proverbial Shelf and the IHOP menu goes right with it. Until then, we have 58 days to ingest as many "elf sprinkles" as we possibly can, to which I say, "Game on."

More like this
Dunkin’s Valentine’s Day Lineup Includes A Drink That Tastes Like Dessert
By Alexis Morillo
12 Aphrodisiac Desserts To Spice Up Your Valentine’s Day
By Kaitlyn Wylde
23 Super Sweet Things To Write In A Valentine's Day Card
By Karen Belz and Lexi Inks
8 Things You Can Do To Appreciate Lunar New Year
By Elizabeth Tsung
Get Even More From Bustle — Sign Up For The Newsletter
From hair trends to relationship advice, our daily newsletter has everything you need to sound like a person who’s on TikTok, even if you aren’t.