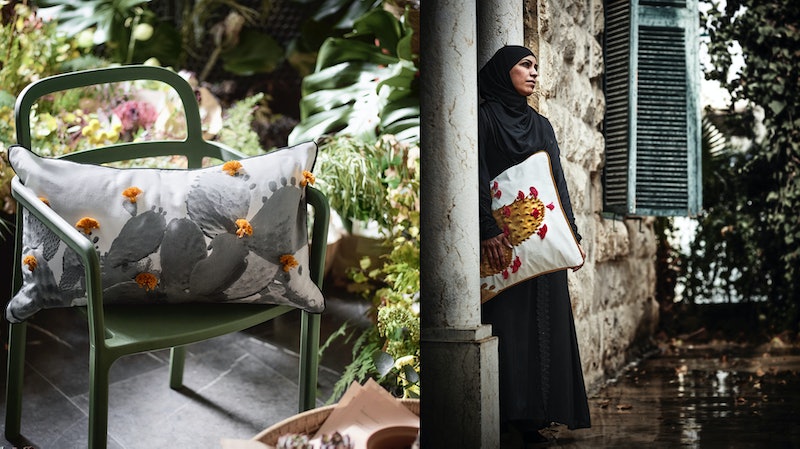 IKEA's collaboration game has been on fire as of late. On June 8, it was announced that the Swedish furniture giant would be partnering with Saint Heron, Solange Knowles' multimedia collective, the details of which are still extremely under wraps. Now, per a press release sent to Bustle via email, IKEA will soon launch a gorgeous new collection that has the added benefit of creating jobs for female artisans in Jordan. IKEA's Tilltalande collection is a collaborative effort between the Swedish assemble-it-yourself furniture chain, the Jordan River Foundation, and female artisans. The initiative aims “to create jobs for Jordanian women and refugees coming mainly from Syria,” according to the press release.

In recent years, IKEA has built collaborations with social entrepreneurs worldwide in order to facilitate job creation and empower local economies. Tilltalande is the most recent effort in this vein, and through the current partnership, IKEA has enlisted the remarkable talents of women artisans, while creating a collection inspired by Jordanian colors, traditional imagery, and the local landscape. The “result is a collection of precious, handcrafted textiles made by 100 skilled local women and refugees,” the press release states. And the pieces are gorgeous — I absolutely want all the things.

From the deep blue cotton cushion cover with a dramatic eye pattern to the so-very-charming pink-tasseled cactus pillow cover, this artfully handcrafted collection includes cushy floor pillows and deeply colorful textiles. It's also made from sustainable materials, with patterns reminiscent of the rich Jordanian landscape. I definitely intend to snag one or two of the geometrically designed floor pillows, or maybe this exquisite black and white Bedouin-inspired rug made of pure new wool. The collection is handcrafted by over 100 Jordanian and Syrian women, and the number of women employed by the project is set to double this year — by the end of 2020, 400 local women artisans are projected to take part in the collaboration.

With help from JRF designer Faridon Abida, lead project designer Paulin Machado made it a point to incorporate traditional techniques into the Tilltalande designs. IKEA’s designers prioritized finding “the right balance between design, production efficiency, and making the attractive for consumers in the region.” Machado also said that the team couldn’t be happier with the outcome of the collaboration, and hopes this will lead to a lasting partnership in which the lives of women, children, and refugees in Jordan are significantly improved, according to IKEA’s official press release.

If you, like me, are hoping to snag every single piece in the collection, sadly, there's a small catch — the project is super limited-edition, and will only be available in IKEA's Brooklyn, New York, location (and not available for purchase online). The collection will be available starting around June 20 (which is also World Refugee Day), and while pricing isn't 100 percent confirmed yet, it's likely to be in line with the rest of IKEA's extremely affordable pieces. (For what it's worth, the website currently shows prices for the items in the collection in Jordanian dinars; a pillow cover advertised for $18.990 JD converts to roughly $27 USD, though that doesn't include the costs associated with importing the items.) Bustle has reached out to IKEA's team for comment, and will update this story when we receive a response.

Machado was quoted on IKEA’s website, saying, “There was an instant connection with the women artisans. They love what they do, and they can see that I love what I do.” Vaishali Misra, Business Leader for Social Entrepreneur Partnerships at IKEA, said that this is only the beginning for IKEA’s collaboration with JRF, and that plans to develop further projects are in the works: “We see that [the collaboration] leaves the involved women with a greater self-confidence and pride — and with the chance to plan for the future.” Win-win-win.