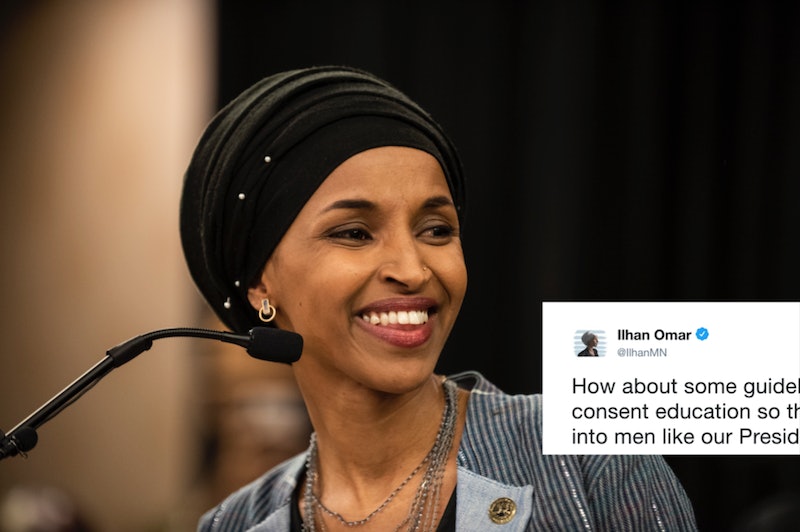 When the U.S. Education Department released new rules dictating how college campuses should respond to sexual misconduct on Friday, liberals around the country reacted with outrage, including one particularly blistering tweet from a Minnesota representative-elect. Ilhan Omar responded to Betsy DeVos' Title IX proposal by pointing the education secretary to the area where she thinks reform is really needed: the president's own conduct.

"How about some guidelines for mandatory consent education so that boys don't grow into men like our President?" Omar tweeted on Friday.

Earlier in the day, DeVos finally released a long-awaited proposal that would replace Obama-era guidance for how colleges should respond to sexual assault allegations. If enacted into law, the new rules would restrict the definition of sexual harassment that applies on campuses, narrow the range of allegations that schools are forced to respond to, and create more sympathetic conditions for the accused parties.

Critics argue that the proposal would make students even less likely to come forward about sexual misconduct incidents than they are currently (according to the National Sexual Violence Resource Center, over 90 percent of campus sexual assault victims don't report the crime).

"The results of these proposed rules would be devastating," Tracey Vitchers of It's On Us said in a statement on Friday obtained by Bustle. "Survivors would have fewer viable pathways to achieve justice, and all students would be less safe as they pursue their education."

Omar undoubtedly feels the same way. She participated in #MeToo and speaks often about her commitment to social justice, including for the populations who are most affected by sexual misconduct. Until recently, she was the vice president of the Democratic Farmer Labor Feminist Caucus.

As Omar rose to national prominence this year, she became known in part for her unwillingness to equivocate about her opinions — so this Friday tweet is nothing unusual for her. She's also quite used to condemning the president. In an interview with The Intercept's Mehdi Hasan, she called Trump a "madman" who doesn't have "the mental space to really think about what his actions mean for people around him." She's also said that the president's "politics of fear" was partially what inspired her to run for Congress and that she doesn't believe that there's any question as to "whether Trump is a racist."

With her Friday tweet, Omar was referring to the long list of sexual assault allegations that have been levied at the president, all of which he continues to deny. Business Insider reports that 22 women have come forward with misconduct allegations against him. Multiple women have accused him of putting his hand up their skirts. Several Miss Teen USA and Miss USA contestants alleged that he walked in on their dressing rooms. Many others have accused him of kissing and groping them without their consent. He has denied the allegations, claiming in 2016 that "every woman lied."

When she is sworn in this January, Omar will become the only Somali-American to have ever served in Congress. She and Rashida Tlaib (D-Mich.) will also be the first Muslim congresswomen.