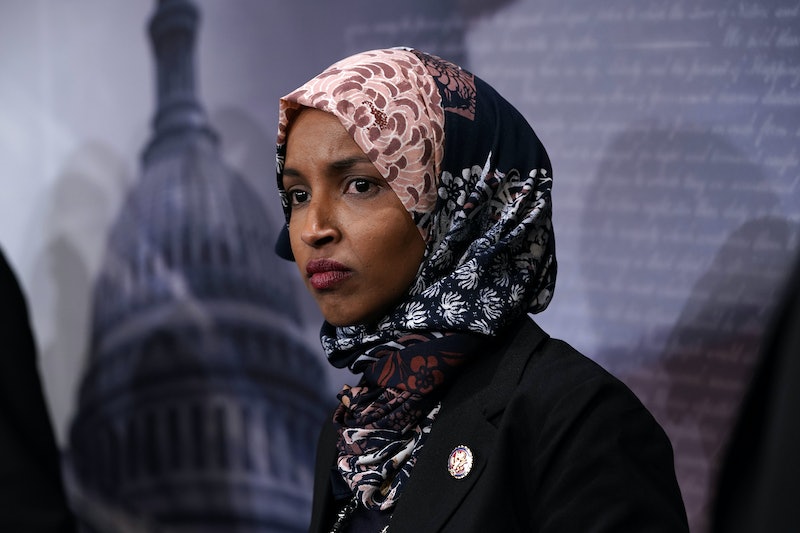 It was a rough weekend for Rep. Ilhan Omar, whose tweets about the pro-Israel lobby on Capitol Hill led to accusations of anti-Semitism. By Monday, even House Speaker Nancy Pelosi called for a public apology from Omar as charges of anti-Semitic language from the Minnesota congresswoman dominated social media. And the ensuing discussion about the language she used revealed the lack of nuance in discussions about Israeli-American foreign policy and money in politics.

It started when House Minority Leader Kevin McCarthy called for actions against two Democratic congresswomen who have criticized Israel — Omar and Michigan Rep. Rashida Tlaib — on Sunday. Omar shared journalist Glenn Greenwald's tweet on an article about McCarthy's rebuke, adding in her retweet, "It's all about the Benjamins baby," with a musical note emoji.

Omar's comments quickly led to an outpouring of criticism from conservatives, as well as her fellow Democrats. Rep. Jerrold Nadler, a Democratic Jewish lawmaker, called Omar's tweet "deeply hurtful and offensive," The Hill reported. Many pointed out that her tweet fed into an anti-Semitic trope of Jewish people having a lot of money and/or unchecked political influence.

Later, an editor with Forward, a Jewish culture magazine, asked Omar who she thought was "paying American politicians to be pro-Israel." The congresswoman responded in brief: "AIPAC!"

AIPAC, or The American Israel Public Affairs Committee, is "America's bipartisan pro-Israel lobby" with a mission to "strengthen, protect and promote the U.S.-Israel relationship in ways that enhance the security of the United States and Israel." As Vox's Matthew Yglesias explained on Monday, AIPAC does spend quite a bit of money on lobbying, as well as working to influence campaign donations.

Omar's tweet about AIPAC sparked backlash because of the tendency to label all criticism of Israel as anti-Semitic. But as Sludge investigative reporter Alex Kotch tweeted, it isn't necessarily an automatic qualifier. "I'm Jewish & a full-time money-in-politics reporter," Kotch wrote. "Everyone knows AIPAC is a very influential pro-Israel lobby that spends money to influence members of Congress. Not every sentence involving Jewish people & money is anti-Semitic."

J Street, a "pro-Israel, pro-peace" nonprofit, doesn't dispute Omar's point that money has a role in politics. But a statement from the organization said Omar's tweets missed the larger context.

"There is no doubt that money often plays a major role in our political system," the organization said. "At the same time, elected officials must be extremely aware that tropes about Jewish money and political influence have been used for centuries to target and stigmatize our community."

In fact, those harmful anti-Semitic tropes had been featured in Republican ads in the last election. Logan Bayroff, director of communications for J Street, tells Bustle that politicians on both sides of the political aisle should be vigilant to avoid such anti-Semitic tropes. "Republican leaders who are accusing Democrats of anti-Semitism should also be taking a really thorough look at the rhetoric that's been coming from President Trump and their own party in the last few years and how that rhetoric has advanced harmful anti-Semitism and xenophobic ideas," Bayroff says.

Numerous people pointed out that Republican politicians have been peddling xenophobic ideas in the just the past few days — including the president. "If you are making a bigger deal about @IlhanMN's AIPAC tweets than the President of the United States tweets joking about the ongoing genocide of indigenous people this weekend, I have serious questions about your priorities and overall common sense," filmmaker Rebecca Pierce wrote.

By Monday, top Democratic leaders, including Pelosi, issued a public rebuke of Omar. "Congresswoman Omar’s use of anti-Semitic tropes and prejudicial accusations about Israel’s supporters is deeply offensive. We condemn these remarks and we call upon Congresswoman Omar to immediately apologize for these hurtful comments," a statement from Democratic leaders read, as quoted by The Hill.

Omar did eventually issue an apology Monday afternoon. "Listening and learning, but standing strong," Omar tweeted alongside a statement:

Anti-Semitism is real and I am grateful for Jewish allies and colleagues who are educating me on the painful history of anti-Semitic tropes. My intention is never to offend my constituents or Jewish Americans as a whole. We have to always be willing to step back and think through criticism, just as I expect people to hear me when others attack me for my identity. This is why I unequivocally apologize.

But Omar stood by her statement about corporate and lobbying money in politics. "At the same time, I reaffirm the problematic role of lobbyists in our politics, whether it be AIPAC, the NRA or the fossil fuel industry. It's gone on too long and we must be willing to address it," she wrote.