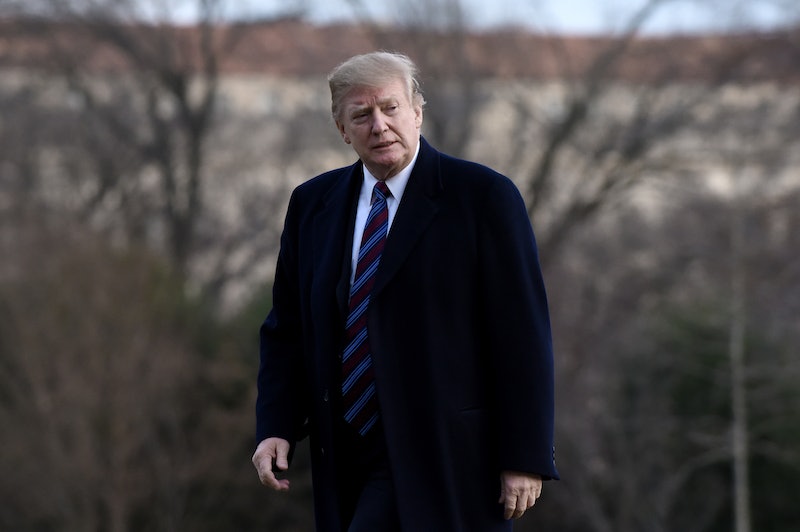 Hours after Elizabeth Warren officially announced her 2020 campaign, President Donald Trump took to Twitter to mock the Massachusetts senator. But alongside his standard jabs at Warren's Native American ancestry claims, some people claim Trump made a Trail of Tears joke.

"Today Elizabeth Warren, sometimes referred to by me as Pocahontas, joined the race for President," Trump tweeted Saturday. "Will she run as our first Native American presidential candidate, or has she decided that after 32 years, this is not playing so well anymore? See you on the campaign TRAIL, Liz!"

Of course, it's impossible to know with certainty what Trump's intention was (unless he seeks to clarify his remark, that is). However, his capitalization of the word trail following a reference to Native Americans has widely been interpreted as an attempt to use the Trail of Tears to mock Warren.

According to Native News Online, a digital outlet that seeks to celebrate Native voices, "some American Indians" felt Trump was referring to the Trail of Tears in his tweet. "To Native people, the Trail of Tears is no funny matter," the outlet wrote.

But not everyone seems to have found Trump's tweet to be problematic. House GOP Conference Chairwoman Liz Cheney appeared to dismiss criticisms of Trump's remark Saturday, telling CNN's State of the Union that Warren was "a laughing stock."

"Look, Elizabeth Warren has made herself a laughing stock," The Hill reported Cheney said. "I don't think anybody should be surprised that that's been the reaction to her." Cheney went on to say she had "concerns" about Warren "pretending to be a Native American."

On Instagram, Trump's eldest son, Donald Trump Jr., shared a screenshot of both his father's tweet as well as a response from columnist Michael Malice. "The Native American genocide continues with another murder by the president," Malice's tweet read.

If Trump was indeed attempting to mock Warren's entrance to the 2020 presidential campaign with a reference to the Trail of Tears, it wouldn't be the first time he appeared to frame a joke around violent episodes in Native American history. In January, Trump referenced Wounded Knee, a massacre in 1890 in which hundreds of Sioux Nation members were killed, in a tweet mocking Warren's presidential ambitions.

"If Elizabeth Warren, often referred to by me as Pocahontas, did this commercial from Bighorn or Wounded Knee instead of her kitchen, with her husband dressed in full Indian garb, it would have been a smash!" he tweeted.