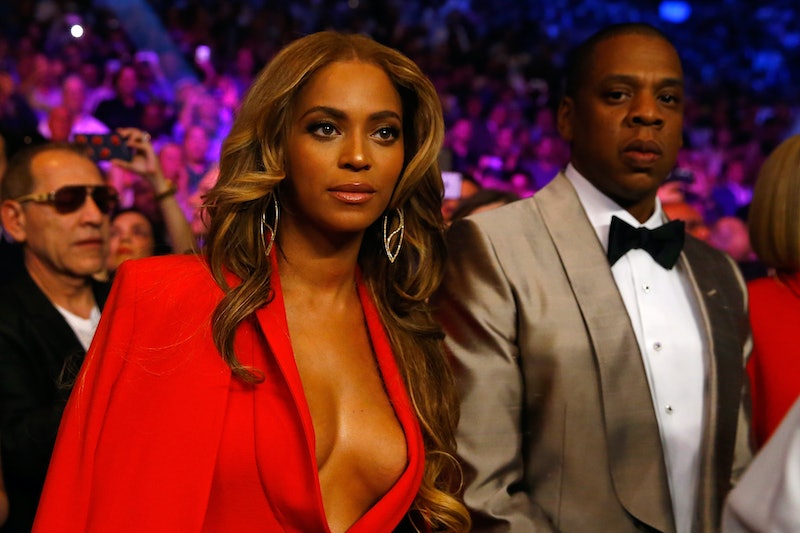 According to TMZ, the names of JAY-Z and Beyoncé's twins have reportedly been revealed. It seems their names may be Rumi and Sir Carter, and yes, the internet is already looking for clues tying Bey and JAY-Z's twins' names to the Illuminati. The world has to do something while it waits for the power couple to officially confirm the awesome news.

It seems like the rumors of Beyoncé and JAY-Z having a connection to the (mostly fictional) secret society have been around since their careers began. For the uninitiated, the Illuminati is a secret organization that was formed in 1776 by Bavarian professor Adam Weishaupt. The group wanted to gain power by placing its members in key, influential positions. It was promptly outlawed less than a decade later, but rumors of its continued existence persist.

While Queen Bey slayed the rumors herself in her hit "Formation," she still hasn't escaped the internet's fascination with the idea that she and her husband could be part of an elite secret society. Hey, she does have a lot of influence — but I'm fairly certain that's because she's one of the most talented people on the planet.

Put your rational thoughts aside for a moment though because these theories about Rumi and Sir's possible Illuminati ties are too good to pass up. For instance, there are these foolproof math equations:

And then there's this revealing name mash-up that points to some serious thought on JAY-Z and Bey's part, and another baby to obsess over one day.

Still not convinced? Just wait until you read this quote from the poet Rumi. It has to be a sign (that Rumi was a gifted writer).

Or you can just declare that the twins have been blessed with Illuminati-approved monikers. You just keep doing you, internet.

These Illuminati theories are definitely reaching, but you have to admit, they are entertaining.