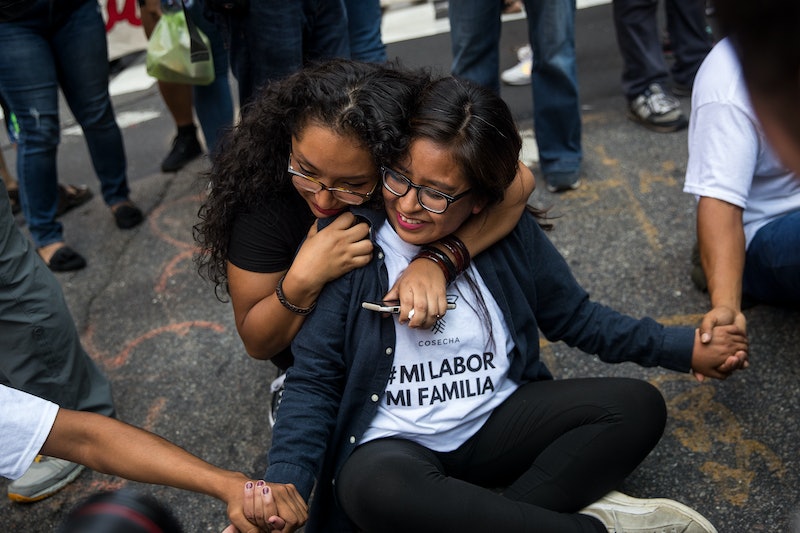 On Tuesday, Jeff Sessions announced the devastating news that the Trump administration will end DACA (Deferred Action for Childhood Arrivals). Implemented by President Obama in 2012, DACA gave two-year work permits to immigrants who arrived in the United States before they turned 16, and deferred action on their deportation. DACA came about after years of struggle from some brave leaders of the immigrant movement, who took to the streets, confronted politicians, and demanded a dignified existence for immigrants.

My family migrated from northern Mexico to United States when I was six years old. My first job in Tennessee, years before DACA was implemented, was working at Pizza Hut in my teens. I had graduated high school in South Texas and, though I worked 60 hours a week for $6.25 an hour, as an undocumented immigrant, I was elated to be working anywhere. At that time, Nashville was enforcing the infamous 287g program, which gave local police the authority to act as immigration agents. I understood that my undocumented status put me at risk for deportation, so I stayed quiet at work, clocking those grueling hours and collecting my pay and trying to go unnoticed. This was the American South that I encountered in the early 2000s: long hours, meager wages, racist police and policies.

"We no longer had to negotiate the balance of risking being outed during the hiring process versus being exploited for cheap labor."

I enrolled in the DACA a few weeks after it became available. It was a very administrative process with USCIS (United States Citizenship And Immigration Services). I had an appointment to be fingerprinted and photographed, and within weeks my work permit arrived in the mail in a nondescript envelope. That little piece of paper gave me so many opportunities. As undocumented workers, we were faced with some of the most dangerous workplace conditions along with some of the lowest pay. But as DACA recipients, we were not obliged to stay with those abusive employers any more. We no longer had to negotiate the balance of risking being outed during the hiring process versus being exploited for cheap labor. We had opportunity to leave our worst jobs, and leave we did. But those who did not qualify for DACA — those who were too old, had not lived in the United States at the right time, had criminal records or previously dropped out of school, were not so lucky. DACA was never a solution. It was only an out for some of us.

DACA brought about questions for those fortunate enough to be recipients. Is this a victory? I wondered. Is this enough? What about my friends and family who don't qualify? What will happen in two years, when my work permit expires? We took our bilingual skills with us when we left our lower-paying jobs, and we left the remaining undocumented people to fend for themselves.

But life changed for me. Within weeks of receiving my work permit, I started a new job working as a legal assistant and then as a community organizer. I no longer had to make an instant plan and think through the entire scenario of being deported at the sight of a police car behind me. I'm 33 now, and still a DACA recipient, but only for a little longer. When my DACA status ends, I only know that there's much to be learned from how people like me got through times like these before.

Everywhere I look, there's evidence of Nashville's history of oppression and worker mistreatment. A few blocks away from the Pizza Hut I worked at was a former plantation, now the site of the Nashville zoo. When they accidentally dug up an old graveyard there while paving the zoo’s new entrance, they found the remains of half a dozen enslaved people, their bodies crippled from overwork. The names of Nashville’s streets carry the history of the city’s first "Deporter-In-Chief" (Andrew Jackson) and the histories of exploitation: Belle Meade Plantation, Forrest Avenue, Overton High School. These names remind us of our pain, but also our liberation.

"As immigrants, we know we are fighting for much more than citizenship — we part of the universal struggle for human rights and dignity."

In 2006, I participated in a march in downtown Nashville that was the city’s largest since the Civil Rights movement. During those marches and strikes (at the time, we called them “A Day Without A Mexican”) I saw tens of thousands of undocumented families — painters still in their work boots, moms with their kids, a never-ending stream of people — carrying the traditions of liberation down the same street where Diane Nash confronted Mayor Ben West to desegregate Nashville in 1960. Over the last couple of years, we have filled those same streets to insist that Black Lives Matter, to support workers who clean downtown hotels, and to protest for migrant rights and against wage theft. Regardless of who among us has the “right” paperwork, we still continue to fight, because the fight is in our blood.

The South has always been a place of resistance. We live on lands where enslaved black people fought for their freedom and won, where civil rights leaders put their bodies on the line to desegregate lunch counters, schools, public parks, neighborhoods, where the old Jim Crow was enacted and rejected. The tactics of the Civil Rights Era were direct and confrontational and forced those in power to act. As immigrants, we know we are fighting for much more than citizenship — we part of the universal struggle for human rights and dignity, and we owe so much to those who fought before us.

So, what if we took a lesson from the Atlanta Washerwomen strike of 1881, which was proof that domestic workers have the power to shut down the city, and demanded rights for all low-wage workers in all the cities? What if we won health benefits for home care workers? What if farmworkers had the right to overtime pay in the fields? What if we continue to dream and create a liberation that we have not yet experienced? What if we looked further than DACA and fought for reasonable immigration policies and the humane treatment for all immigrants, regardless of status?

"We can learn from the tactics of the past — the sit ins, the marches, the union drives— and know that we will win."

Trump’s decision on DACA is a continuation of the great fight for immigrant and workers rights. We, as undocumented people, as exploited people, must join and continue this tradition of liberation. We, Latinx migrants, can look towards the black southern community and understand how racist policies take hold (they had Bull Connor in Alabama, we have Donald Trump in the White House). They are not the same but they are put in place by the same systems of oppression. We can learn from the tactics of the past — the sit-ins, the marches, the union drives— and know that we will win. We live in a place where tougher victories have been won. As Southern Latinx, we reside on land where people were enslaved — and freed themselves — and we can and will continue this tradition of liberation.

More like this
Romance Authors Are Mobilizing For Reproductive Rights
By Natalia Perez-Gonzalez
These 2 Women Could Be America’s First Lesbian Governors
By Tess Garcia
Looks Like She Made It
By Lindsay Zoladz, Beau Grealy and Tiffany Reid
Danessa Myricks Does It All
By Parizaad Khan Sethi
Get Even More From Bustle — Sign Up For The Newsletter