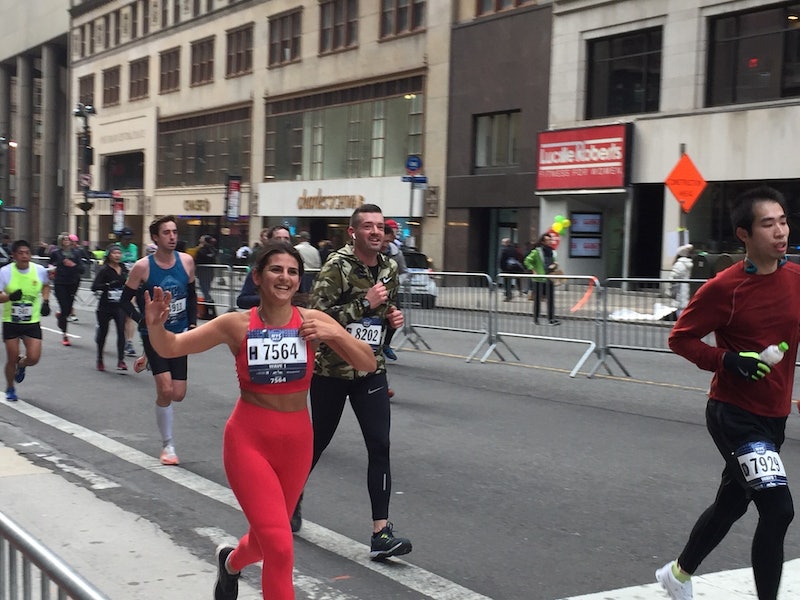 When I found out I got into the TCS NYC Marathon via a pending charge on my credit card statement one day at work, I quickly closed my laptop and took a deep breath. How did this happen and how do I get out of it?

I know that’s probably not the reaction most people have when they get accepted into a major race that nearly 53,000 people completed last year, but I entered the drawing assuming I'd never get in (for reference, New York Road Runners says 117,709 runners applied to the 2019 drawing and 10,510 were accepted.)

"One more year and then I’ll probably be ready." That's the excuse I'd been telling myself and others each time I was asked if I'd ever consider running the New York City Marathon. I'm not sure what made me enter the drawing in the first place, but maybe I wanted some sort of validation that I wasn't ready for it yet.

I've been running for four years now, and it all started by accident one May afternoon in Cape Cod, Massachusetts when I begrudgingly agreed to run with my dad, who's been a runner for the past 30-plus years. I was feeling restless and had no other options for exercise, so I told him I'd only be able to join him for 1 mile — if that — and to just go ahead without me when I needed to stop. I was shocked to find out we'd run 3 miles and I wasn't limping or gasping for air. Knowing I was capable of running 3 miles lit something inside me. It gave me the confidence to run on the treadmill a few days later and push myself to 3 and a half miles, and then a month or so later, 4 miles. Then, later in the year, I surprised myself by hitting 6 and 7 miles.

Running is a selfish sport, which is why I love it and also hate it. I pat myself on the back when I push myself to the next mile, and I happy cry when I finish a half marathon. But there are times when I get so bored with my own thoughts that I don't fully enjoy it or I feel like stopping after 3 miles when I was hoping to do eight.

The second my mind starts to race on a run, it's all over. I have no choice but to work through it, whether it's by reframing my thoughts or focusing on something else entirely, to reach stability. Chaos is simply not productive in running.

I'm by no means an elite runner or even someone who runs every day. I've run three half marathons and several 10Ks at this point, but I still don't have a go-to pre-race meal. I got plantar fasciitis a year and a half ago from wearing unsupportive running sneakers (I highly recommend Brooks' Ghost line of sneakers, which is what I've been training in). Anytime I look around at races and see people doing stretches I didn't know were possible, or I'm asked what my goal pace is, I feel weird calling myself a runner.

Running is good for both your physical health and your mental health, but it has been especially impactful on my mental strength, too. The second my mind starts to race on a run, it's all over. I have no choice but to work through it, whether it's by reframing my thoughts or focusing on something else entirely, to reach stability. Chaos is simply not productive in running. The ability to work through challenges — and even welcome them — has carried over into other areas of my life where I've normally been too afraid to step outside my comfort zone. At work, I've learned to say yes to opportunities that scare me a little, or even a lot. In my personal life, I started dating a friend I've known since elementary school, something that felt like a risky move but is one of the best choices I've ever made.

What started as a way to exercise has now become my my self-care, my go-to for clearing my head and feeling free. But my strategy with running has always been to go at my own pace and never focus too much on the numbers. So the idea of using an 18-week training plan for the marathon was frightening.

I talked to Kevin Hanson, founder and coach of the Hansons-Brooks Distance Project, who created the Hansons-Brooks Advanced Marathon plan I was going to use, about everything from what to do if I miss a day (don't make up mileage, move on!) to what you're really supposed to eat before a race. My most pressing question though — how can I actually enjoy the training process?

"Start measuring yourself," Hanson tells Bustle. "You can be amazed at how you can self-motivate. You can say, 'Holy cow, this is the biggest week I ever had', or, 'Oh, this is the fastest I've ever run for this distance.' Constant feedback allows you to continue to be happy with what you're doing, and motivate you on a daily basis."

Hanson says what you do before a race or during is all about what works for you — even the traditional pasta dinner before a big race.

"The greatest thing about an 18-week schedule is that you get a lot of trial and error," Hanson says. "I always say don't fall into what I call the black sock effect, which is, 'I always run well when I wear my black socks.' Once something works, you have to try it again and again and make sure that it wasn't something that you were just lucky with. One of the worst things is talking to someone else ... For some people, even the elite athletes we coach, pasta doesn't sit right. They need something different."

After my conversation with Hanson, I was excited to start training and run my own race, as they say. About two weeks into the plan, I started to wonder if I was cut out for this. Four weeks in, I feared my calves would ever not be sore. At the two-month mark, I realized if I could do 14 miles, I could probably do 16. And at 14 weeks in, I couldn't wait to walk through the door, the sweatiest I've ever been, and tell my boyfriend, "I did it, I hit 20 miles!"

Training took some time to get used to and appreciate, but I loved having something concrete to work towards and keep me accountable. I had to learn how to push my body and listen to it at the same time. I had to be consistent. Even when I would've rather hit snooze, I had to just get up and run. I had to learn to be OK with the fact that I may easily run 10 miles one day, and then two days later 3 miles will feel nearly impossible.

Hanson says the reason you're running a marathon should be top of mind, especially on the days you're dragging yourself out of bed. The marathon is not a bucket list item for me. It's not about getting to see every borough of NYC in one day. I'm still not sure if I'm trying to prove to myself that I'm a runner, even if I don't know everything there is to know about running. But above all, I do know I'm running for the me who didn't think she could run more than 1 mile that day in Cape Cod.

Kevin Hanson, founder and coach of the Hansons-Brooks Distance Project.