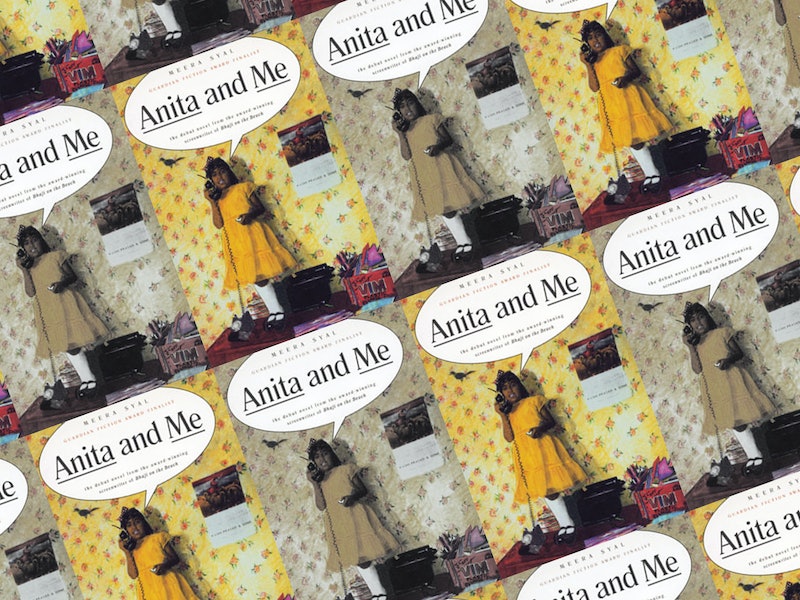 Bustle's I'm So Jealous series is dedicated to the books, TV shows, movies, podcasts, and more that super fans are so jealous someone else gets to experience for the first time. In this installment, Rajpreet Heir writes about Meera Syal's semi-autobiographical novel Anita and Me.

Sometimes you read a novel that makes you sit up in bed as if you’ve been called out. During the final year of my Creative Writing Master of Fine Arts, I read Anita and Me and was astonished to discover it was one such book.

Anita and Me is a semi-autobiographical novel by actress and author Meera Syal, who was born an hour away from my mom in England, happens to be two years older than her, and is also the daughter of Indian immigrants. I grew up in Indianapolis, and my only glimpses of my mom’s past came through her stories and during our trips across the Atlantic. With Anita and Me, suddenly, I had over 300 pages of stories that sounded like my mother’s.

The embarrassing thing is that I should have read Syal’s books a lot sooner. I was working against myself for the longest time, because I wanted to disassociate with anything Indian. In Indiana, it wasn’t exactly an advantage to look different, and I was reluctant to learn anything about Indian food, my language (Punjabi), or the music, lest I accelerate even faster in the opposite direction of "cool." Whenever I did force myself to read something by an Indian author, I didn’t usually relate, especially if the book was set in India, where I’d never been and my parents had only visited once or twice.

I was reluctant to learn anything about Indian food, my language (Punjabi), or the music, lest I accelerate even faster in the opposite direction of "cool."

But by the final year of my education, the personal essays I wrote in my MFA program were growing flat; I was running out of things to say about my experiences as an Indian woman, and didn’t know what my work meant or where it fit into a larger conversation about Indian writing. I decided to attend a book festival panel of Indian writers, and I asked one of the panelists for recommendations of authors with Punjabi heritage like me. After four months of procrastinating, I decided to read one of the books.

'Anita and Me' by Meera Syla

I was surprised to discover that Anita and Me is a coming-of-age story about Meena, a nine-year-old British Indian girl and her best friend, a Caucasian neighbor named Anita, as the two grow up in the fictional Midlands village of Tollington in the late 1960s. Meena could be described as an Indian Anne of Green Gables; she has an overactive imagination and mischievous streak, and from the very first scene, it’s obvious she is not the stereotypical obedient Indian daughter that I was used to seeing in most forms of media. Meena steals money from her mom and uses it to buy candy, and she becomes friends with Anita, the brashest girl in town and head of a small girl gang called The Wenches. While much of Meena's story reminded me of my mother, I found I identified with her, too.

Meena doesn’t know if she wants to be Indian or British. This constantly puts her at odds with her parents, their friends, her friends, her teachers, and townspeople. She struggles to meet her parents’ expectations because she tells lies, she doesn’t want to learn about her heritage, and she is "too mouthy." Yet, she is too Indian for her British friends. She tries hard to copy Anita, and this works for a time. But then Meena experiences a terrible betrayal, forcing her to learn the painful lesson that the town she loves also harbors intense hatred toward her and her family.

While much of Meena's story reminded me of my mother, I found I identified with her, too.

This novel made me feel full. It gave me two things that I love — a coming-of-age story set in an everyday neighborhood and a stunning narrative of childhood friendship — and it reflected my very specific cultural background. Plus, the main character wants to be a writer, too. Not only that, but it allowed me to understand my mom’s experience on a deeper level. I think of Syal as a sort of aunt, who tells me all of what I already know of my family’s background, but also gives me more details about some of the tougher things people don’t want to discuss or prefer to forget: The racism Indians experienced at that time and what it was like to live through India’s Partition in 1947.

After finally seeing myself and my family reflected in literature, I was inspired to choose Partition as the topic of a research project during the final semester of my M.F.A. Like Meena, who gradually decides to learn more about her heritage and finds value in being part of the Indian Diaspora, the process of decolonizing my mind has been rewarding. Now I can’t stop reading books by Indians about Indians.

If you’re picking up Anita and Me for the first time: The Black Country dialect might take some effort to understand. You’ll get used to it, though.

If you love it and want more: Watch Bend It Like Beckham, East is East, Bhaji on the Beach, and Blinded by the Light, out in the U.S. in August. These comedy dramas about the British Indian experience have similar themes to Anita and Me.

And if the book turns you into a Meera Syel superfan: Watch the 2002 film Anita and Me, read her two other novels, watch her in the TV shows Goodness Gracious Me and The Kumars at No 42, and see her in the recently released Yesterday. She’s everywhere!