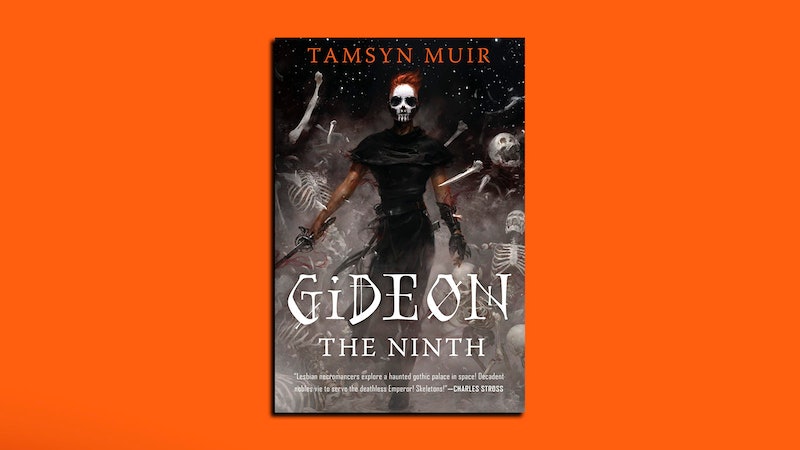 Bustle's I'm So Jealous series is dedicated to the books, TV shows, movies, podcasts, and more that super fans are so jealous someone else gets to experience for the first time. In this installment, K.W. Colyard writes about Tamsyn Muir's Gideon the Ninth.

"Lesbian necromancers explore a haunted gothic palace in space!" That's how Charles Stross' cover blurb describes Tamsyn Muir's breakout hit, Gideon the Ninth. What the blurb doesn't tell you is how quickly Muir's world of spacefaring necromancers, and her cavalier — in more ways than one — lesbian protagonist will suck you in.

Gideon Nav has grown up in the Ninth House alongside its sole heir, the Reverend Daughter Harrowhark Nonagesimus, who happens to be her childhood rival. Gideon wants nothing more than to run away and join the military as a brute-force fighter, but Harrow and the rest of the Ninth insist she stay to live out her indentured servitude.

As Gideon the Ninth opens, the Ninth House receives a summons calling for Harrow — a necromancer — and her cavalier — a rapier-wielding bodyguard — to a competition that will determine who gets to become the Emperor's new, elite warriors, called Lyctors. Gideon and Harrow strike up a bargain. If Gideon will take the place of Harrow's cavalier, who has just fled for his mother's home planet, then Harrow will allow Gideon to leave the Ninth. Pretty simple, right?

Wrong. Not only are the surly Harrow and freewheeling Gideon disinclined to tell one another the truth about anything, but there's a strange evil afoot in Canaan House. Given almost free rein to explore the haunted mansion to which they have been summoned, the necromancers and cavaliers of the eight houses begin searching for the secret to Lyctorhood. When the other competitors start to turn up dead — so dead that even the most talented necromancers are unable to revive them — the would-be Lyctors who remain must work together to catch their killer, or die trying.

If you are picking up Gideon the Ninth for the first time: Prepare to fall head-over-heels in love with the wise-cracking Gideon, who is basically a walking meme-machine.

If you love it and want more of the same: For more necromancy in fiction, check out Sabriel by Garth Nix and The Bone Witch by Rin Chupeco. If another witty hero is what you're after, you should look into Megan Whalen Turner's Queen's Thief series, as well as Scott Lynch's The Lies of Locke Lamora. For more queer SFF heroines, check out The Stars Are Legion by Kameron Hurley and Huntress by Malinda Lo.

If Gideon the Ninth leaves you wanting more Tamsyn Muir: Gideon the Ninth is Muir's first novel, but you can find many of her shorter works online and in various anthologies. "The Magician's Apprentice" is available to read online at Lightspeed Magazine, and you can read "Union" on Clarkesworld's website. The sequel to Gideon the Ninth, titled Harrow the Ninth, is out on June 2, 2020, and you can start reading it on Bustle right now.

More like this
'The Sandman’s Ending Is A Departure From Neil Gaiman’s Comic Book Series
By Kadin Burnett
I've Read The Harry Potter Books 30+ Times & This Plot Hole Haunts Me
By Kelsey Stiegman
The 'PLL: Original Sin' Creators Say A’s Identity Will Be “Very Clear” By The Season Finale
By Alyssa Lapid
Why Did Meatball Leave 'The Bachelorette'? His Second Chance Didn’t Last Too Long
By Grace Wehniainen
Get Even More From Bustle — Sign Up For The Newsletter