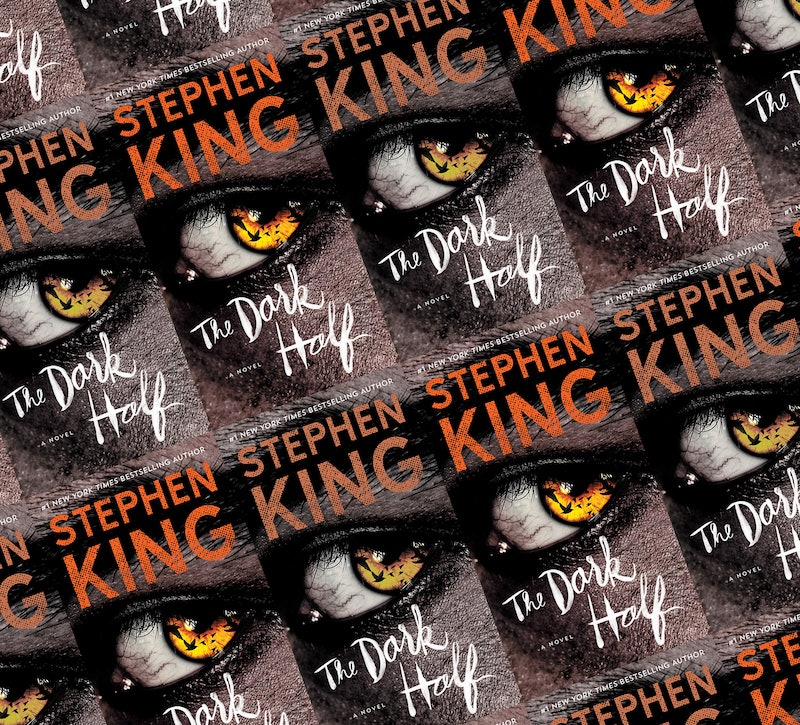 Bustle's I'm So Jealous series is dedicated to the books, TV shows, movies, podcasts, and more that super fans are so jealous someone else gets to experience for the first time. In this installment, K.W. Colyard writes about Stephen King's The Dark Half.

When I was a kid, I used to sign off on my stories and drawings using pen names. Because I never published anything under those names, I eventually shifted back to being plain old Kristian Wilson, and didn't give a second thought to the aliases I had created and abandoned — until I read Stephen King's The Dark Half.

Published in 1989, The Dark Half tells the story of Thad Beaumont, an author of unpopular literary fiction who also writes grisly bestsellers as "George Stark." When someone puts together that the two writers are the same person, Beaumont stages a funeral for Stark for a feature in People magazine... and that's where his troubles begin.

Shortly after Stark's funeral, a series of increasingly gruesome murders takes out Beaumont's associates, one by one. The crimes are eerily similar to those committed by Alexis Machine, the serial killer at the center of George Stark's successful novels. When local police begin to investigate, they find that the killer's fingerprints match Beaumont's — but he was somewhere else at the time of each murder.

'The Dark Half' by Stephen King
Amazon

The premise might sound a little goofy to anyone who isn't used to reading King's lesser-known works, a fact that King himself acknowledges in the text. Theorizing that Stark is somehow responsible for the murders, Beaumont and his wife, Liz, approach the primary investigator, Alan Pangborn. Pangborn responds glibly, and explains: "I'm not being sarcastic, I'm trying to use a little verbal shock-treatment to make you see how crazy you both sound! You are talking about a goddam pen name coming to life!"

Yet all that apparent absurdity was what drove me to read The Dark Half in the first place, and the idea that a buried pen name might rise from the grave to ruin its author's life intrigued King for the same reason it grabbed me. From the late 1970s to the mid-1980s, when King's career was taking off, he published five novels — Rage, The Long Walk, Roadwork, The Running Man, and Thinner — as "Richard Bachman," to avoid flooding the market with his own name. After King was outed as Bachman in the mid-1980s, he stopped using the pseudonym, but has since published two books — The Regulators and Blaze — openly under the name.

From the moment I saw the blurb on the rear cover — "But how can Thad disown the ultimate embodiment of evil that goes by the name he gave it — and signs its crimes with Thad's bloody fingerprints?" — I knew this was a book I had to read. After all, how many pen names had I given birth to and then buried? At least Beaumont staged a ceremony for Stark's funeral; all I did was toss my discarded pseudonyms silently into shallow graves underneath my own floorboards. If speaking something into being were possible, what ramifications did that have for me, as a fiction writer who gave life to new characters like a hot kettle burping out popcorn?

More than a decade after I first read The Dark Half, I still don't have answers to those questions. What I do have, however, is a fantastic horror story that pays readers off in spades for their suspension of disbelief.

If you are picking up The Dark Half for the first time: Be prepared for lots of blood and guts in scenes that will stick in your mind forever. Seriously, the killer doesn't mess around.

If you love it and want more of the same: You'll want to check out more horror novels featuring evil twins and unreliable narrators, such as The Other by Thomas Tryon, Her Fearful Symmetry by Audrey Niffenegger, and Hysteria by Megan Miranda.

If The Dark Half leaves you wanting more Stephen King: Welcome to the fan club, new Constant Reader! You've got more than four decades of King to read through, so why not survey those years with a book from each decade? To start you off, I recommend The Shining, The Stand, Under the Dome, and Revival.