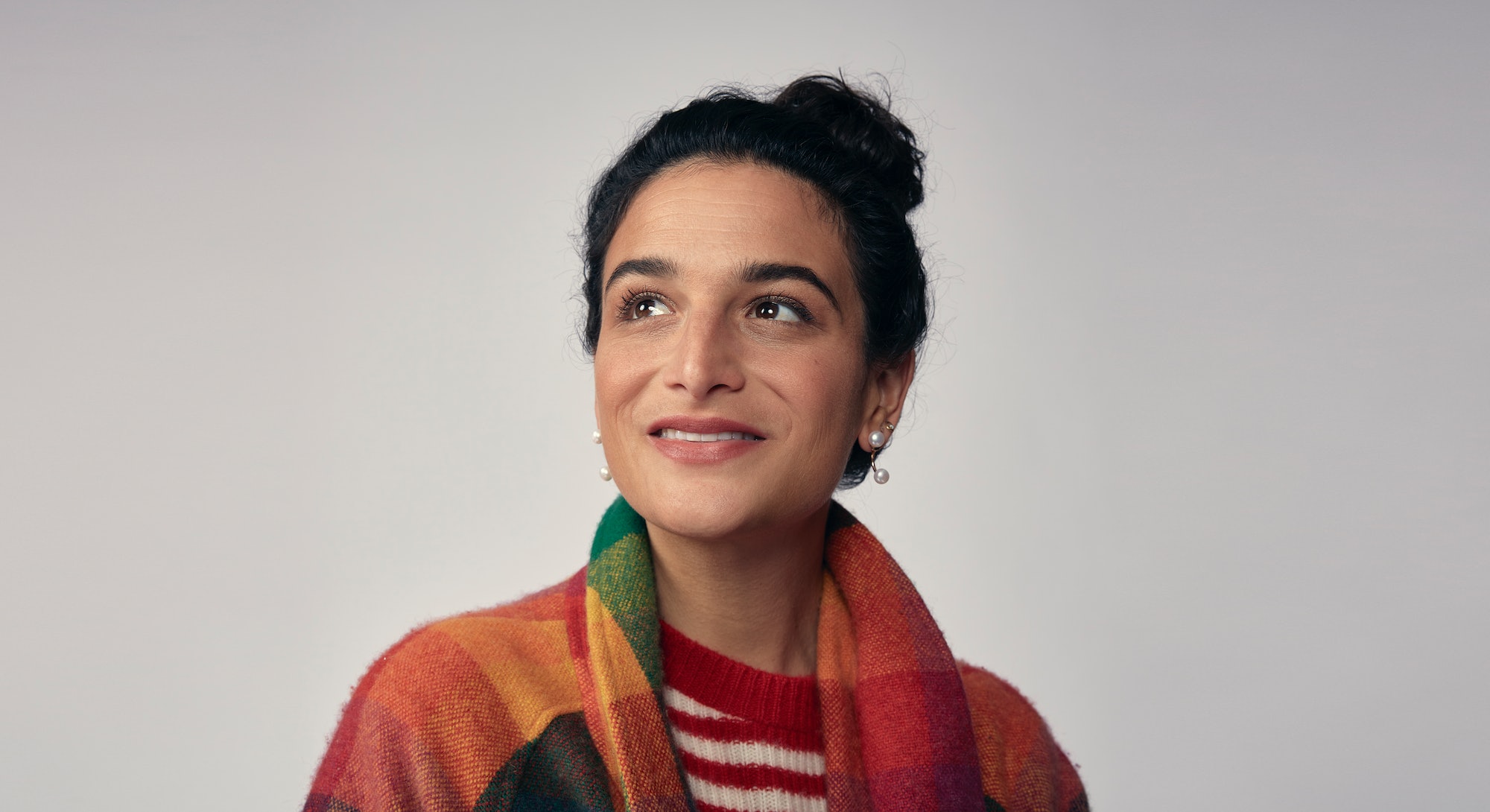 If you ask, Jenny Slate will tell you her deepest fears. She'll even paint you a detailed picture of her anxiety, which she imagines as a bad animal who lurks behind trees in the dense forest of her mind. Her voice will morph into a gravelly squawk as she imagines what her anxiety animal would say to taunt her: "Come with me," she'll bellow in the voice, "to the swamp!"

She'll laugh at her off-the-cuff impression, but it won't be long before she and you, two strangers, are on the verge of tears. This is the effect of having a conversation with Jenny Slate. She can't help but to give all of herself to you.

Before we're welling up with tears, Slate is in the bathroom changing. When she emerges in a matching red-and-white striped cashmere sweater and skirt set for the photoshoot, she's embarrassed. Not because the outfit makes her feel "like the one Jewish person in Santa's workshop" — though she'll say that soon. No, it's because her ring — well, a ring she borrowed for the day — is stuck on her finger. She's been in the bathroom "yoinking" on it in a panic until her skin has turned red and raw.

Her team mobilizes to suggest removal strategies. Lotion? Dental floss? Should the ring just be a part of her body now and forevermore? After a few minutes of yanking, it slides off and we breathe a collective sigh of relief.

“This is very me,” Slate says with amusement.

Her good-natured clumsiness is a running theme: She describes herself in her upcoming Netflix comedy special Stage Fright as "a turtle that just got roller skates and realized that things can be fast." But spend an hour with Slate and you'll get the sense that her understanding of herself is holistic and extends far deeper than a comment acknowledging her proclivity for getting expensive jewelry stuck on her hands. She has examined the inner workings of her heart and her brain and even the desires and "sad songs of her vagina," and she can't help but share all of it with you.

Slate is gearing up for a monumental fall, as she prepares to release both her first-ever comedy special on Netflix on Oct. 22 and a collection of fantastical essays called Little Weirds on Nov. 5. Both works are characterized by a deep sense of personal intimacy and self-reflection, with the recent ups and downs of her life referenced both obliquely and often explicitly.

"Recently my life fell to pieces," Slate writes in the introductory essay of Little Weirds, going on to list "pummeling heartbreak" and "loss of confidence" as some of the reasons for her lament. Slate's past few years have been tumultuous: She officially divorced from her husband of four years and Marcel the Shell with Shoes On co-creator Dean Fleischer-Camp in 2016; dated her Gifted co-star and international heartthrob Chris Evans (consequently setting the internet on fire); and spoke candidly about what it was like to date and subsequently break up with Captain America in a Vulture interview that went viral. Five months after that, a Marie Claire headline proclaimed that she was “trying not to overshare” anymore. But Slate still doesn’t regret giving all of herself to strangers — in interviews and in everyday life. On the contrary, it's the reason she makes art in the first place.

"I don't mind being in the public eye; I like it. I like it when people come up to me in the supermarket and say hello," Slate tells me. She's lounging in a chair wrapped in a cozy rainbow sweater that extends past her knees, looking like the exact personification of what it means to be warm and inviting. "I, in fact, need to feel that strangers are friendly and that maybe I've given them something."

Stage Fright, Slate's unique spin on a comedy special, gives even more of her by design, splicing her standup show with glimpses into her childhood via home-video footage and present-day interviews she conducts with her parents, sisters, and both her grandmothers. Viewers are invited into her childhood home in Milton, Mass., as she explores her old bedroom and marvels at the angsty etchings left in her closet. These personal touches make for a fascinating juxtaposition of reality and the exaggeration that's often inherent in joke-telling. You don't usually get to hear a comedian do a spot-on impression of her grandmother and then see her actual grandmother — a living, breathing human being who appears proud and mildly amused that her granddaughter has grown up to become a famous actor and comedian — as she exists in the world, without hyperbole.

"I experience sorrow that really makes me feel like I am often in a harness and that I'm like an animal in a yoke."

"I want to show my family, because I want people to know that even though I’m making jokes out of what has occurred, that I am telling the truth. My grandmother’s voice does sound like that," Slate says. "I come from a place and the through line is the truth, and the art is what I do with the truth."

A major one of Jenny Slate's truths is that in her 37 years, she's learned to accept her brain's penchant for summoning her anxiety — that bad animal in the woods — even when he's not invited. "I have doubt, and I have a lot of fear, and I experience sorrow that really makes me feel like I am often in a harness and that I'm like an animal in a yoke," she admits. "I'm not immune to any of that."

The conversation is getting deeply personal, but Slate doesn't seem concerned. She forges ahead, explaining her fears with the peaceful acceptance of someone who has spent enough time examining them that they feel less like confessions and more like simple facts. "I'm so afraid of abandonment, so afraid of betrayal. I'm so afraid to find out what I thought is the truth is not," she continues. We've been speaking for less than 20 minutes, and the artifice of the interview has shattered. I didn't expect to find myself in an impromptu therapy session with Jenny Slate, but it's certainly starting to feel that way.

I acknowledge that I'm about to cry. "Me too," she says, sympathetic yet composed, intent on ending her thought on a hopeful note. "But I'm learning at least not to follow those thoughts. But it is very, very, very hard."

Her unfettered admissions of joy and sadness keep coming without apology or pretense. They're neither intentional nor completely unplanned: Slate simply says what she feels in the moment with conviction, and is connected to art that does the same. "Many times my own life has been enhanced or even saved by other people who have shown their sorrow in a beautiful and digestible way," she says, referencing the playful illustrations of Maira Kalman.

Everyone has their own unique fight-or-flight responses to acute stress. Jenny Slate's fight response, she tells me, is care. It's a blessing but also a curse. "I feel so sad when I feel unlovable, and for some reason, I have developed a deep internal reaction that's like an emergency system that reaches for beauty and softness," she explains. "And sometimes it is incredibly sad to reach for beauty and softness in a state of despair. But it is always there."

Both Stage Fright and Little Weirds heavily reference Slate's most recent major periods of despair and loneliness, when she was processing her divorce from Fleischer-Camp and mourning the end of her on-and-off relationship with Evans. (Slate announced her engagement to art curator Ben Shattuck in September 2019). But while she doesn't reference either ex by name in our conversation, she's candid when discussing her own historical need to find meaning through relationships.

"I really, really needed to understand that solitude is different than abandonment. I just could never tell the difference before," she says, letting out a sigh. "I just felt like if I'm alone, I'm just not good enough. That even if I'm alone in the woods, someone should f*ckin' crash through the sky right now and find me. And it's like, I don't want to think of my heart as something that has a tracking device on it. I just want to think of myself as lit from within."

It's one thing to understand that desire, and another one entirely to internalize it. Singledom, as it is for many people, was a minefield for Slate. Asked if she ever used dating apps — a friend suggested she try Raya, a dating app for celebrities and influencers — and her response is swift and politely dismissive. "No, mm-mmm," she says, shaking her head. "I don't like computers. I don't like my phone very much, even... all of us are already one in a crowd of millions. I don't really need to be lined up, you know?"

With or without the swiping, dating was still frustrating; in Stage Fright, she describes in amusing detail one excruciatingly terrible date, the details of which we won't spoil here. For the most part, though, her takeaways from dating life are refreshingly straightforward. "Meeting people, they serve some of your needs, or they answer to some of your preferences, and sometimes you're just like, Yes, thank you, and I could never spend my whole life with you," Slate says. "When I met Ben, I was becoming more and more comfortable with the idea of — it's strange when I think about it now — of just kind of being alone."

Maybe she's not every man's cup of tea — she's fine with that now. "The idea of worrying about my bush to worrying about whether or not I need too much [in a relationship], I just was kind of like, None of that sh*t is any of my business anymore. I just don’t care for it," she says, laughing. "And I realized that I just wanted to feel like I wasn't under somebody's gaze, like a gaze that felt basic to me. Because I don't have a basic perspective; my perspective is multi. And I just needed to figure out that feeling that way isn't for special times, but should be the standard."

If dreams are a window into one's subconscious, then on a good day, Jenny Slate's is safe and comforting, like sitting on the lap of a giant dog, its paws snugly wrapped around your torso. When I suggest that one could only be so lucky as to have their idle mind conjure up that sweetly surreal image, she assures me that her optimism isn't always innate. "I don't exist the way that I exist in this world that I live in because I've figured out how to be happy all of the time," she says. But sometimes, her subconscious can remind her of her desire to pull herself out of a rut. "I don't know why I had that dream about that dog, except that I just think that for me, to be alive also coincides with wanting to enjoy myself."

That doesn't mean she's reached enlightenment, or that she doesn't struggle with bouts of negative thinking. Jenny Slate exists as a human who's constantly reaching out — for connection, for beauty and softness, and sometimes just for a giant dog to hold her tight.

Hair by Peter Butler at TraceyMattingly.com