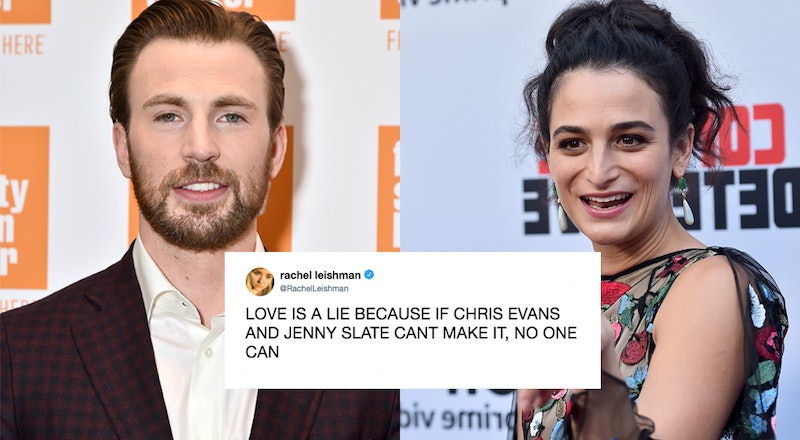 Fans who 'ship Chris Evans and Jenny Slate have held out hope that the couple would stay together for good. But if Evans' recent interview with The New York Times is any indication, it sounds like that ship has sailed, and Slate and Evans' latest break up might be for good. The Times profile, written by Reggie Ugwu, reports that Evans and Slate's relationship "recently ended," but, though you might be reaching for the tissues, there is at least one good thing to come out of it.

Much of the Times profile is devoted to Evans' new role in Broadway's Lobby Hero, a play by Kenneth Lonergan in which the actor plays a villainous cop. But Ugwu does mention Slate by name, noting that the actors' "on-again, off-again relationship" was "beloved by the internet." Ugwu includes the note about the breakup in a parenthetical aside about a book Evans recently read. Here's the section of the Times profile that mentions Slate:

"One book he found eye-opening was Rebecca Solnit's 'The Mother of All Questions.' Mr. Evans read it while dating the actress Jenny Slate (their on-again, off-again relationship, beloved by the internet, recently ended) and decided that he needed to listen more and speak less.

'The hardest thing to reconcile is that just because you have good intentions, doesn't mean it's your time to have a voice,' he said."

Ugwu doesn't offer much information about Evans and Slate's break up, but what little was in the article was enough to send the internet into a spiral of tears.

And it's not hard to understand why this couple was so beloved by the internet. Evans and Slate first met on the set of Gifted, in which they co-starred as love interests. Rumors that they were dating started in May 2016, before the movie was released. At the time, the pair shared sweet words about each other during an appearance on Anna Faris' podcast, Anna Faris Is Unqualified. "Sometimes you just meet the same animal," Evans said on the podcast in 2016. "And that's just [what it's like] with Jenny."

Unfortunately for fans, though, Evans and Slate broke up in February 2017. The following month, Slate told Vulture that the two of them hadn't spoken much since the split. Here's what she told the outlet in March 2017:

"We're not on bad terms, but we haven't really seen each other, spoken a lot. I'd love to be his friend one day, but we threw down pretty hard. No regrets, though. Ever."

But here's the silver lining: it looks like something changed after Slate's conversation with Vulture, and the two not only got back in touch but continued to be a positive influence on each other's lives. Last November, rumors started going around that Evans and Slate were back together. The pair were reportedly seen together in New York, with Slate helping Evans look for an apartment to stay in during Lobby Hero's run. She also tweeted about her "boyfriend" in November, prompting fans to infer that she was referring to Evans, though she didn't mention him by name.

The initial re-coupling wasn't totally out of the blue, either. Though Slate said that she and Evans originally didn't remain close friends, they shared various positive sentiments about each other in interviews after their first split. Last March, Evans told People that "there’s just nothing to not love" about Slate. And in the same Vulture interview where she spoke about the breakup, Slate said that Evans' "heart is probably golden-colored, if you could paint it."

Based on the Times' account, it sounds like the two actors did get back together in recent months, but their relationship has come to another stopping point since then. The paper doesn't give an exact timeline of when Slate and Evans got back together and broke up again, but the way the news is worded does feel like it could be their final split.

At least it sounds like Slate and Evans continue to have positive influences on each other, even if they're no longer together. As Ugwu mentions, Evans did start reading Solnit's book while dating Slate. And if his relationship with her helped Evans learn more about listening to other people's perspectives, then that's another and even more positive outcome after their split.