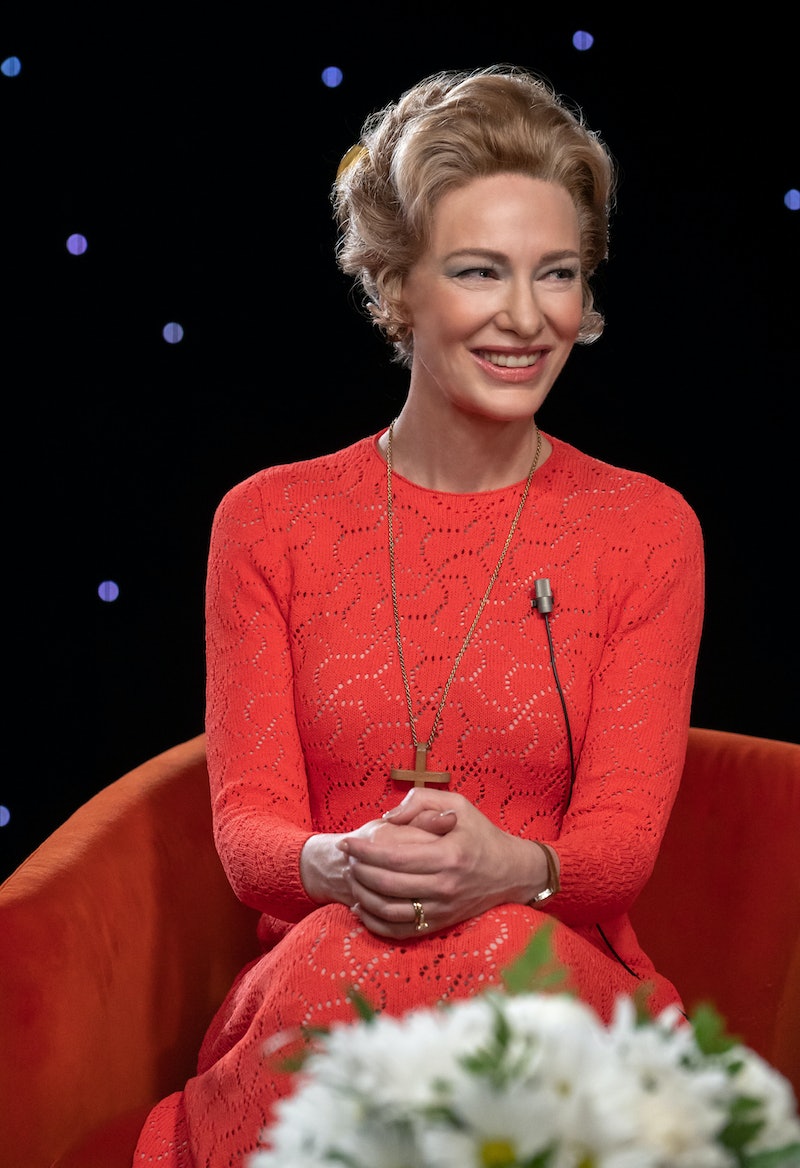 While Phyllis Schlafly's Stop ERA campaign was single-minded in its goal, Mrs. America shows how it eventually folded into the Eagle Forum, a large special interest group centered around conservative, anti-feminist ideologies. They organized against abortion, sex education, and gay rights, and in 2020, the Eagle Forum stands behind Trump and his most conservative beliefs.

Schlafly founded the Eagle Forum as "the alternative to women's lib." In Schlafly's view, the ERA would take away a woman's right to be "supported and protected" by men. One Eagle Forum letter mailed to households reportedly read that ERA proponents were all educated "women lawyers, women legislators, and women executives" who were trying to oppress homemakers and housewives. "We, the wives and working women, need you, dear Senators and Representatives, to protect us," the letter said.

After Schlafly successfully defeated the Equal Rights Amendment in 1982, the Eagle Forum turned its focus to stopping things like sex education in schools. According to The New York Times, Schlafly believed that sex education was "a principal cause of teenage pregnancy.'' In 1984, the Eagle Forum then opposed an amendment to give equal pay to women. Schlafly claimed it was an attack on blue-collar men and the traditional family, and that female secretaries, nurses, and teachers were just envious of the pay given to male janitors and firefighters. The Eagle Forum has also consistently held its anti-abortion stance.

The Eagle Forum was also vocally against gay rights, and the Eagle Forum newsletter regularly published insulting cartoons about same-sex marriage and trans issues. In 1988, the Eagle Forum decried Surgeon General C. Everett Koop’s AIDS education program as “the teaching of safe sodomy." The Eagle Forum has held firm to its anti-gay rhetoric to this day, even after Schlafly's own son was outed in 1992.

Over the years, the Eagle Forum also took aim at "well-financed" minorities — a thinly veiled insult towards Jewish people — while Schlafly demonstrated an increasing dislike of the press. Schlafly herself officially endorsed Trump in 2016 before her death that same year; she praised him in 2015 for steering discussions of immigration away from amnesty and toward deportation, and also agreed with his Muslim ban. In an interview with Breitbart News, Schlafly said Trump was the only candidate who could "defeat the kingmakers" in Washington. Though her endorsement caused a brief split within the Eagle Forum, it seems the group has since coalesced to back the current president.

Mrs. America shows Schlafly was hesitant to align with racist figures and organizations, but in real life, the Eagle Forum has since held conventions featuring alt-right speakers like Stephen Bannon and David Horowitz. In 2017, the Eagle Forum held the 46th annual Eagle Council, an event that according to the Southern Poverty Law Center vilified Muslims, immigrants, refugees, and LGBT people. This trend continued at the 2018 Eagle Council, as well.

Today, the Eagle Forum continues to back Trump's talking points. According to their blog updates, they support Trump cutting all ties with China due to the COVID-19 epidemic, and support the "peaceful protests" to reopen America. They are vocally against reinstating the Violence Against Women Act to help those suffering domestic violence during isolation, and unsurprisingly, view Mrs. America's portrayal of Schlafly as "fake news."

More like this
Eurovision Has Been Given A Whole New Look Ahead Of Its Liverpool Debut
By Bustle UK
'The Last Of Us' Episode Schedule Competes With The Super Bowl & Oscars
By Brad Witter
Grammys Host Trevor Noah Made Adele's Dream Of Meeting The Rock Come True
By Brad Witter
Pedro Pascal Barely Got Through The "Lisa From Temecula" 'SNL' Sketch
By Stephanie Topacio Long
Get Even More From Bustle — Sign Up For The Newsletter
From hair trends to relationship advice, our daily newsletter has everything you need to sound like a person who’s on TikTok, even if you aren’t.