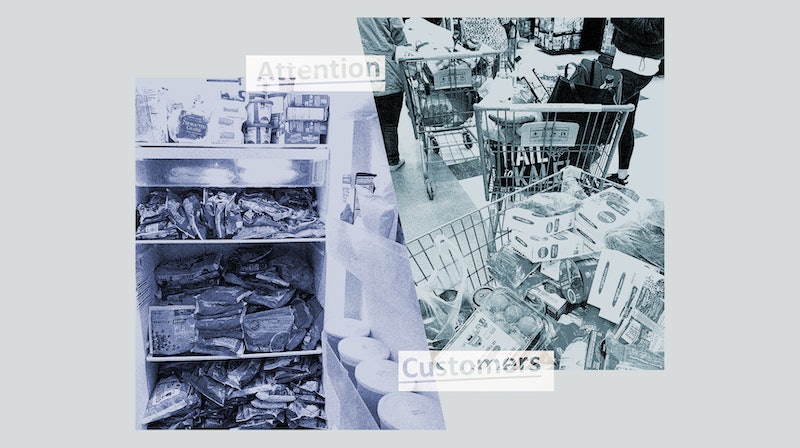 So far, in our house, the approach to COVID-19 has been accumulation. We have so many paper towels, buckets of Tylenol, so many eggs. Four different pasta sauces, three peanut butters, two types of tea, over 200 cans of Diet Coke. I have purchased every bean, grain, and variety of frozen produce I can possibly afford, which is a lot. With every cart I’ve taken to checkout, every trip to the supermarket, I’ve felt a little more gross.

I think about the person who cleans our apartment and the person who helps care for our children. They have watched the pantry and freezers — we got a third — fill with reserves that most people cannot afford. How is this possibly defensible?

Before this, my answer would simply have been that it isn’t. We’ve all had it instilled in us since our earliest education in being human: Take what you need but not more. Share the rest, out of altruism or because you, too, may need a hand one day or because exaggerated wealth disparities provide an unsustainable economic model. You have obligations beyond you and yours.

I still believe all this. However, the content of my group texts over the last week show that people are responding very differently to this, both in the degree to which they are absorbing the threat and how they are responding to it once they allow that Something is Happening. Now that the most comprehensive threat to civilization in several generations is spreading among us, and with it, a fear of literally — not spiritually or emotionally — not having enough that Americans above the poverty line have not felt since the Depression, people are reacting every kind of way. They are choosing to go into the office, virus be damned (these people are usually British or from a rugged, Libertarian state). They are absconding to the Bedford house, full staff in tow. They are canceling the meeting they were going to fly to and, what the hell, booking the cruise. They are baking a lot a lot. They are compiling lists of self-care TV and choreographing TikToks and making sure the guns are loaded. We are all over the map.

Some of us will make decisions that put self before community and country in ways that are usually obfuscated by tax shelters or the dark art of rearranging the kids’ halloween candy to conceal the pillage.

A week ago, when I was more stocking than stockpiling, my own response to the not-yet-pandemic was shot through with historical romance. This experience will situate us among the Great Generations that have Endured Hardship! The Brits are calm about it because they were sitting ducks in the Blitz! Americans are shopping compulsively because we were taught to during the Cold War!

Specific to the pantry, in the past day I have thought of: the Union blockade of Vicksburg in 1863, which is how New Orleans came to cut its coffee with chicory; the World War II rations that Molly McIntire — the American Girl doll, obviously — used to make her birthday cake; the fresh-baked taralli the officers in Malaparte’s The Skin encounter in that alley in Naples. Privation looms large and romantic in the American imagination, and that is certainly connected to our stomachs. Think of the forgotten wines the French are discovering in their caves! Think of the pots of red sauce Italian nonas are cooking up right now!

Although she was unaware of them, these fantasies were helpful to my wife. In our marriage, I play the at-times-irrationally calm foil to my wife’s anxiety. I attribute my general lack of anxiety—or rather, my pathological ability to push my rivers of worry so deep I am mostly unaware of them—to my New Orleans upbringing. The city’s tagline is literally “The Big Easy.”

As things have gotten worse, I’ve come off my borrowed wartime nostalgia. Much to my wife’s chagrin, I have now inhabited the moment in all its badness. And while stories of goodwill and heroism will arise amid and in response to the abject mishandling of COVID-19 and resulting tragedies, this will not be a convivial hurricane party of a tale. Supermarket shelves are bare. The infection rate is doubling. Stores are unlikely to close entirely, but it’s reasonable to assume supply chains will be affected. What will we do then?

I got on Amazon in a big way. I recognize the forces, major and minor, driving the impulse. Again, I grew up in New Orleans, where food is not just sustenance but the foundation of daily life, both business and pleasure. I’m in long, imperfect recovery from an eating disorder that at different times has involved months of self-imposed starvation and other months of eating a whole chocolate bar every day after lunch just to feel safe. My spouse, a meticulously fit vegan, is descended from Eastern European jews. It is of interest to us both that there be enough food.

It’s bigger than food, too, of course. A major financial crisis, which this certainly is, plays with all of our emotions around abundance, scarcity and, most elusive of all, sufficiency.

You can understand your behavior, but that doesn’t make it okay.

In a way it’s refreshing: the real possibility of rationing may force us, individually, to find out how much we really need of every kind of resource, from fresh produce to the much-memed meeting that could have been an email to the physical contact that social distancing now prevents. But in this waiting period before we know the full brunt of the blow coronavirus will deal our country and society, especially the neediest among us, I recognize the desperation creeping in — get it while you can — and an enduring personal myth that whatever menace I face, I can, like a 21st century Ms. Pac-Man, consume it before it hurts me.

My wife has decided, consciously, to approach what austerity may come (and it would have to be a lot to affect those with a lot) as an extended longevity fast. “I already do them as a pastime. What am I worried about?” Meanwhile, she is setting up a call bank to check in daily on 70+ seniors.

So far I have been… less conscious. I have maintained my commitment to a few phone-based eating disorder recovery groups I help facilitate, but I am also fantasizing about how a period of privation might finally eliminate the bulgiest parts of my body. I know that if I’m not careful, I will try to smother the worry again. Under the auspices of a potassium boost, I will find myself mainlining bananas to lard myself for the scarcity ahead. Fifteen minutes and half our war chest of JIF later, I will ask in shame why I took so much, why I thought it would help, and know those questions are useless. You can understand your behavior, but that doesn’t make it okay.

In the days ahead, some of us will make decisions that put self before community and country in ways that are usually obfuscated by everything from tax shelters to the dark art of rearranging the kids’ halloween candy to conceal the pillage. We’ve already seen some in the form of price hikes on high-demand goods. An enterprising kid in the UK was caught selling shots of hand sanitizer. Another book passage I’ve been thinking about is the scene in Jeanette Walls’ memoir The Glass Castle where the kids are starving and they obtain a single stick of butter to share. At some point it goes missing, and they discover that their mother has eaten it all. How do we want to have behaved?

The sister of the woman who cares for our children is alone in Italy with a 2-month-old who has bronchitis and a growing five year old. Each person gets a small bottle of milk a day, for which she waits hours. Her husband is stuck on the cruise ship where he works while it is moored in Miami. I wonder how long it will be before she rations herself to feed her kids. I hope I would do the same.

More like this
This Psychological Effect Might Be Keeping You From Hitting Your Goals
By Lexi Inks
The 19 Best Tweets & Memes About Bisexual Awareness Week
By Lexi Inks
Black Women's Equal Pay Day Highlights An Upsetting Problem
By Brandi Neal
The 8 Best Crystals For Confidence, According To Experts
By Megan Gray
Get Even More From Bustle — Sign Up For The Newsletter