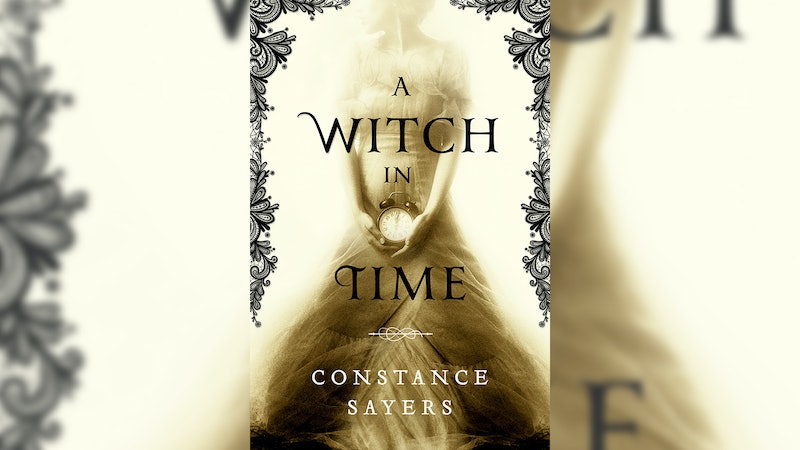 If you're a fan of historical fiction with lots of suspense, I've got a debut novel you're going to love. Coming next winter from Redhook, Constance Sayers' A Witch in Time tells the story of a witch who must live out an ill-fated love affair throughout various time periods, from 1890s Paris to Obama-era Washington, D.C. A Witch in Time is out Feb. 11, 2020, but you can get your first look at the cover, and read the first chapter here, exclusively on Bustle.

Constance Sayers' debut novel begins in 2012, when magazine executive Helen Lambert goes on her first, post-divorce date. Luke Varner is nothing like she imagined, but he insists that they know each other — have known one another, in fact, for more than 100 years. As it turns out, Helen was born Juliet LaCompte in late-19th-century France, and she's been reincarnated several times over the course of history, thanks to the meddling of her magically inclined mother.

Back in 1895, 16-year-old Juliet fell in love with a painter named Auguste, but her mother, disapproving of their relationship, attempted to curse him. Instead, she bound her daughter to Auguste, and to a demon, who is fated to fall in love with each of Juliet's incarnations, only to watch her die, terribly young, following the breakup of her relationship with the painter.

The problem is that Juliet never remembers the demon, or her past lives, in any of her incarnations. But this time, as Helen, she begins to recall what happened in Paris, and that may give her the power to break her mother's curse.

Perfect for fans of The Time-Traveler's Wife and Outlander, Constance Sayers' A Witch in Time is out Feb. 11 from Redhook and is available for pre-order today.

Just after my divorce was final, my friend set me up on a blind date. I walked through Le Bar at the Sofitel on 15th Street and asked for the “Varner party.” The hostess pointed to a man sitting alone by the window.

Washington is — at its heart — a genteel Southern town with a dress code to match. In a room bursting with navy suits, bow ties, and the occasional summer seersucker, Luke Varner was terribly out of place. Dressed head-to-toe in black, he looked like an art director from Soho who’d taken the Acela the wrong direction at Penn Station only to find himself surrounded by overfed men swirling glasses of bourbon and chewing on unlit cigars.

He looked up, and I could see that he was neither dashing nor smoldering. The man possessed no exotic features; he was, in fact, rather neutral looking, like a favorite pair of khakis. For a moment I wondered what my friend Mickey had been thinking. This man was not my type.

“I’m Helen Lambert.” I extended my clammy hand, a sign that shouted I hadn’t been on a date in nearly ten years. My first thought was that this date would be brief — one drink just to be polite. I was getting back out there, and a practice date would do me some good.

'A Witch in Time' by Constance Sayers
Amazon

“Hello. Luke Varner.” He stood, studying me for a moment like he was surprised by what he saw.

Despite my own disappointment in him, I sank a little, wondering if, somehow, I had also fallen short of Mickey’s description. Luke took his seat but seemed pensive and quiet, like he was solving a puzzle in his head. After he motioned for me to join him, there was a long, unnerving silence between us.

“Mickey told me all about your house. He says it’s lovely.” I sat down and continued to chat, rambling really, arranging my cloth napkin on my lap, picking it up and putting it down. To my horror, the white threads from the napkin began shedding all over my solid black skirt. I waved the offending napkin at the hostess as though surrendering.

The corner of Luke Varner’s mouth turned up in the beginnings of a laugh at my futile attempts to get the attention of our hostess. Suddenly I felt that I was inadvertently hamming it up like a vaudeville actress.

“My house.” He laughed. “You were asking about my house.” His voice had a sandpaper texture to it, like he’d enjoyed his share of cigarettes over the years. “I like homes with period details, or ‘character’ as they call it nowadays.”

Why was I so anxious about a man I’d already decided I had no interest in?

“Character.” I nodded. “Did Mickey tell you that we sometimes work together?”

Luke leaned back in his seat with what seemed like a smirk. “I heard you run a magazine.”

“In Frame.” I straightened. “The name is a take on photography — what’s in the shot or ‘in the frame’ — we’re looking at trends, what is next to come into focus whether it’s global politics, culture, religion, fashion, lifestyle… we have beats all over the world with our reporters and writers looking at trends bubbling to the surface. We’re known for our photography.” I was beginning to sound like a brochure, so I stopped myself before adding that In Frame had just won the National Magazine Award, and had been described as “one of the most important magazines contributing to not only the national, but global stage,” but I decided against it because Luke Varner didn’t look impressed.

The hostess finally handed me a new black napkin, and I spread it across my lap. I was nervous and crossed my legs so they’d stop shaking. Why was I so anxious about a man I’d already decided I had no interest in? I chalked it up to nerves in getting back into the dating scene. But there was something else.

“It’s bigger than most magazines,” I offered. “Makes the photos really jump.”

He took a deep breath and looked at the table as he spoke. “You haven’t changed. I mean you have changed… the hair mostly. It is more of a copper color now.” He began studying his fork. “I’m sorry,” he mumbled.

“Excuse me?” I thought I’d misunderstood him. “We’ve just met.” I laughed and rearranged my own fork and knife.

He flipped open his menu, scanned it, and then slapped it down. His head tilted. “Do I look familiar to you at all?”

I shook my head, suddenly embarrassed. “Have we met before? I have the worst memory.”

“Nothing? Really?” He leaned in closer, I assumed so I could inspect his face. His small, deep-blue eyes danced above the lit votive on the table. I noticed his face had an unintentional tan, like he worked in a garden, and he had at least a day’s worth of blond stubble — or was it gray? At that moment, in the light, something did seem familiar. “Nope.” But that was a lie.

“I hate this moment.” He rubbed his legs, looking nervous. “I go about thirty years hating this moment, and then you call me and we do this all over again.” He circled his slender forefinger to illustrate. “I just haven’t seen you in a long time.”

“Uh-huh. The first time was 1895 in France.” He paused. “Actually, that was your mother, but we don’t need to get technical about it.”

“My mother?” I was envisioning Margie Connor, my mother, who was at this very moment guzzling box wine and gobbling smoked Gouda cheese bits at her book club in Bethesda. This month they were revisiting The Poisonwood Bible.

“Then there was Los Angeles in 1935. Last time was Taos in 1970. Honestly, I wish you’d come back in Venice or somewhere a little more interesting. I mean, this Washington place is a swamp.” He scowled. “I know you see a resemblance to Paris here, but… ” His voice drifted off and he casually settled back into the banquette like he’d just told me about his day at the office.

I exhaled loud enough to inadvertently catch the attention of the man at the next table. “Let me get this clear. I called you in 1895?” I placed my napkin on the table and eyed my jacket. Finally, I stood up. “Mr. Varner. I’m sorry. You must have me confused with someone else.”

“Helen,” he said with an authority that surprised me. “I’m really not good at this, but theatrics are childish. Sit down.”

I shook my head to ward off the clear image of this man’s weathered face illuminated under a gaslight. The images in my head moved quickly, like flashes...

“Sit down?” I leaned in, placing my hands on the table. “You’re a lunatic, Mr. Varner. I don’t know you. I’m thirty-three years old, not a hundred. I’ve never met you in France… or anywhere else for that matter. And my mother? She works for the National Institutes of Health. She did not… call you in 1895, I assure you.”

And for some strange reason I obeyed, lowering myself onto my chair, like a child.

We sat there looking at each other. Throughout the bar, the candles on the table were like little streetlamps, and I felt something familiar. Then it hit me. Gaslights? I shook my head to ward off the clear image of this man’s weathered face illuminated under a gaslight. The images in my head moved quickly, like flashes — this man smiling at me while we went down a wide boulevard in a carriage, the sound of purposeful hooves hitting pavement, the lights around us shining, brightening his face in a sepia-toned wash the way a flashlight does when you shine it under the covers. His clothes were strangely out of place — almost like he was wearing a Victorian costume — and the setting was all wrong. I swayed in my chair, gripping the table with both hands, and then turned and looked out the window. Even the trees outside, swaying slightly in the breeze and lined with string lights, were conspiratorially twinkling, making his face glow mysteriously from another time, like a tragic character from a Shelley poem.

He pushed the menu away. “You called me a little while ago and asked me to do something for you and I did it.”

I began to protest, but he held up his hand. “Helen, really? We both know what I’m talking about. Don’t we?”