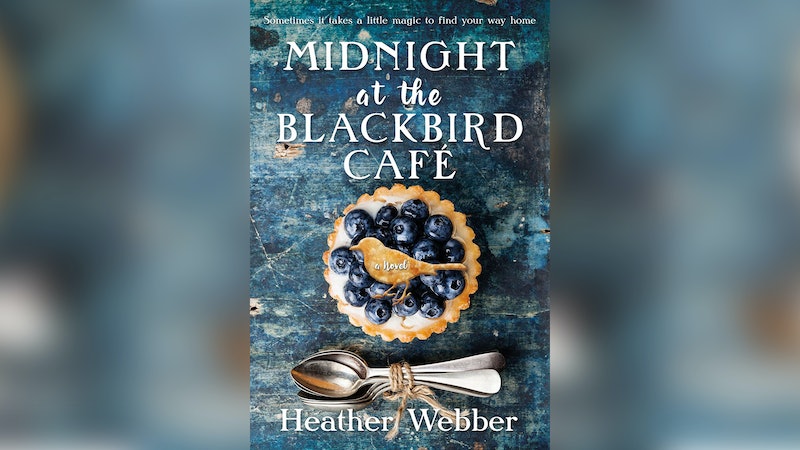 A new novel from the author of the Nina Quinn mystery series will land in stores soon, and Bustle has an exclusive excerpt for you to read below. Out this summer, Heather Webber's Midnight at the Blackbird Café is perfect for fans of Like Water for Chocolate and Fried Green Tomatoes at the Whistle Stop Café. Keep reading to find out all about this new book, and pick up your copy in stores on July 16.

Midnight at the Blackbird Café centers on Anna Kate, an aspiring med student who returns to her hometown of Wicklow, Alabama to settle her Granny Zee's affairs after the older woman's death. Zee was the longtime owner of the Blackbird Café, where she served up her famous pies for years. Now, Anna Kate plans to close the café and move on with her life, but her grandmother's legacy — and the magic of a good pie — might keep her in Wicklow for longer than she expects. Especially because these blackbird pies make you dream of those you have loved and lost.

Heather Webber's Midnight at the Blackbird Café lands in stores on July 16, but you can pre-order your copy today. Check out the exclusive excerpt Bustle has for you below, and watch out for this enchanting new novel, in stores this summer.

'Midnight at the Blackbird Café' by Heather Webber
Amazon

“When did you first notice the blackbirds?” the reporter asked.

Bow Barthelemy kicked out long, thin legs. “They’ve been here as long as I have.”

“How long have you worked for the café?”

“Twenty-five years, but the birds have been here longer. Nearly a century, I’ve heard.”

The reporter rolled his eyes and scribbled a note. “Are there always twenty-four birds like in that old nursery rhyme? ‘Four and twenty blackbirds, Baked in a pie — ’ ”

“‘When the pie was opened, The birds began to sing.’ ” Bow finished the quote. “I know it. Zee once said those birds were probably relatives.”

“She was obviously joking. Right?”

“Zee never joked about the blackbirds.”

Unsure what to say to that, the reporter tapped his pen, then gestured wide. “You don’t find all this strange?”

“Not at all, but what’s strange to me could look mighty different to you.” He stood up, pushed the chair in. “I need to be gettin’ back to work. You want a refill on that blackberry tea?”

“I heard tell you’re heading off to medical school soon, young lady,” Mr. Lazenby said. His bottom lip pushed outward and his jaw set as if bracing for a fight.

Skirting his chair, I picked up empty plates and gathered discarded silverware from a nearby table. I wasn’t surprised by his nosiness, as it seemed to be a community-wide affliction, almost as prevalent as the lack of respect for personal space. People had been giving me hugs all morning, my stiffness not the least bit of a deterrent. Did no one have boundaries around here? “That’s right. Classes start in August.”

Truthfully, I’d have quit altogether, except for a promise I’d made to my mother a long time ago.

It had taken me seven long years to complete my pre-med undergrad. Between switching schools twice, taking time off after my mom’s death, and running out of tuition money . . . it was a miracle I’d graduated at all. Truthfully, I’d have quit altogether, except for a promise I’d made to my mother a long time ago.

“Hmmph,” Mr. Lazenby said, staring long and hard at me.

It looked like he had dressed for a special occasion this morning, wearing pressed trousers, a crisp white button-down, and a red and white checkered bowtie, but I’d come to recognize it was his normal, everyday attire.

He’d been here since the doors opened at eight and didn’t look like he planned to leave anytime soon, even though it was now well after ten. Sitting prim and proper, with his back ramrod straight and his napkin on his lap, he glared at his fork.

“Something wrong?” I asked.

“Otis Lazenby,” Jena Barthelemy called out from the kitchen, “I know you’re not insulting my cooking. That’s Zee’s recipe for apple pie, and I’ll have you know it’s a ribbon-winner.”

Jena apparently had bionic hearing, because I wasn’t sure how she’d heard him over the hum in the room.

“It might be Zee’s recipe,” he said, “but this pie don’t taste like the pies Miss Zee made.”

“We can’t be changing the fact that Zee’s gone to glory, can we?” Jena walked over to us. “God bless her soul. Times are changing, and we need to change right along with them, don’t we?”

“But I’ll still dream to night, right?” he asked, panic threading through his high voice.

A wave of anxiety washed over me.

While on earth, it’s the job of us guardians to tend to the trees, nurture them, and gather their love to bake into pies to serve those who mourn, those left behind. You see, the bonds of love are only strengthened when someone leaves this earth, not diminished. Some have trouble understanding that, so it’s the pie that determines who’s in need of a message, a reminding, if you will; it’s the love in the pie that connects the two worlds; and it’s a tree keeper who delivers the message.

Yesterday, Jena had taken on the task of making the blackbird pies, and I should have known they wouldn’t be quite right. A guardian was supposed to bake the pies. Now that Zee was gone, making the pies fell on me as the only surviving Callow. Unfortunately, I didn’t think Mr. Lazenby would get the message he longed for, but I was hoping by some miracle that he would.

“Hmmph.” He pouted at the fork before shoving it into his mouth.

“Now tell all, Anna Kate. Did you always want to be a doctor?” Pebbles Lutz asked.

Pebbles, her white hair piled high, sat across from Mr. Lazenby at the ten-seat communal table that took up most of the dining room. This morning, I’d seen her cast more than one longing glance his way, but he seemed oblivious to her attention . . . and affection.

“For as long as I remember,” I said, dodging the heart of the question, the want part, as I collected more plates.

The café had once been a carriage house Zee had converted many decades ago into a restaurant downstairs and living quarters up. A glass door and big bay windows at the front of the café let in an abundance of light. The floors were the same dark pine as the stairs, and the walls were covered in white-washed pine, as was the ceiling. With a fairly open layout — only a half wall separated the cooking and dining areas — it felt as though this was a family kitchen rather than a business.

Hands full, I headed back to the kitchen, to drop the dishes at the sink and take a minute to simply breathe.

The whole space was light and bright and airy, but right now it felt more than a little claustrophobic. All eight tables were full, every seat taken. Several people stood near the door outside, waiting to come in. Some I recognized as neighbors. Some I didn’t, such as the young woman with the baby who kept passing by, staring inside forlornly.

Hands full, I headed back to the kitchen, to drop the dishes at the sink and take a minute to simply breathe. It was overwhelming to be the focus of so much attention.

“You’re doing fine, just fine,” Bow said from his spot at the stove. His normally pale face was infused with redness from standing over the stove all morning, and concern flashed in his light blue-gray eyes.

“Especially seeing as you have no restaurant experience,” Jena added. “I’m impressed.”

I decided she impressed easily, because I was a hot mess. I knew my way around a regular kitchen — cooking and baking were second nature to me — but I knew nothing about working in a commercial kitchen or waitressing.

I’d already broken three plates, spilled more water than I cared to admit, and was limping—my feet burned like the devil. “Is it always this busy?”

“It’s a sight busier than usual.” Bow pulled a basket from the double fryer. “Between the birdwatchers and . . . you. People are curious.”

There was a slight arch to his back, and I wondered if that’s where his nickname had come from. His body looked like a bow missing its arrow. He emptied the basket onto a paper plate. Crispy hash browns spilled out, glistening and steaming, and I dashed them with salt before they cooled.

“I know they are.” I’d expected a crowd. But not quite one this size.

Bow flipped a row of pancakes on the built-in griddle on the top-of-the-line six-burner gas range. It was clear Zee had recently done updates to the kitchen and had spared no expense doing so.

“We can close up early if you want,” Jena chimed in. “You’re the boss. Nobody’s going to argue.” Hope sparked in her brown eyes as she cut biscuits from thick dough. She stood at the marble-topped prep island, which was covered in a thin coat of flour. Jena, too. The white powder dusted her dark, plump cheeks and thin, straight eyebrows. Black hair threaded with silver was pulled up into a high, coiled bun.

Jena and Bow Barthelemy had welcomed me to the Blackbird Café with wide open — if not floury — arms.

“That’s okay. I can handle it.” At least I could for another four hours.

Jena dusted off her hands. “You’ve got Zee’s spunk, that’s for sure.”

Jena and Bow Barthelemy had welcomed me to the Blackbird Café with wide open — if not floury — arms. While they seemed to know everything about me and Mom, they tended to reveal their past to me much like they cooked. A dash of this, a dollop of that. A light-handed sprinkling of history. They were in their middle fifties and both had worked here for decades, coming on board after my mom left town. Their job titles were a bit vague, but it seemed to me that they were everything. Cooks, cleaners, gardeners, servers, cashiers, and maintenance.

I glanced out the double windows over the deep farmer’s sink, across the yard to the mulberry trees. Fluttering leaves made it look like the trees were fanning themselves in the morning heat. Mulberries, still pale and unripe, hung from thin stems. Bow referred to the fruit as blackberry’s skinny cousin — they shared the same pebbled skin and coloring. Never having eaten a mulberry, I’d picked a pinkish one a few days ago and winced at the sourness. According to Jena, the berries wouldn’t be fully ripe for another three weeks or so, when they turned fully black. Only then would their sweet yet mild flavor shine through.