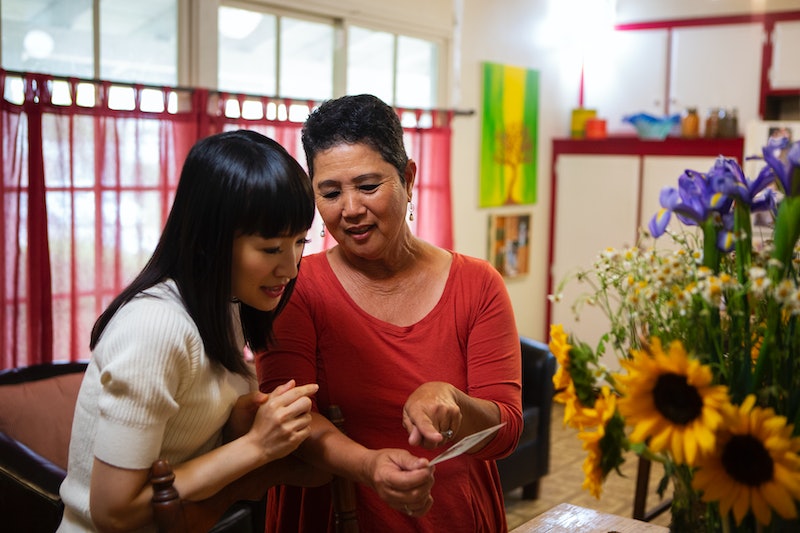 Spoilers ahead for Tidying Up with Marie Kondo Episodes 1-3 The subjects of Netflix's latest reality show, Tidying Up with Marie Kondo, are overwhelmed by their belongings. But it's not just their physical stuff: they also struggle with time management, chore allotment, and the motivation to do it all. Who can't relate to that, right? In the first three episodes of this kind-hearted series, Marie meets three couples whose relationships have taken a backseat to their enormous amount of clutter, which often leads to stress and bickering. While none of this is particularly surprising, the antiquated gender roles on Tidying Up with Marie Kondo are.

To be clear, this is not the host's fault. On the contrary, Kondo is the one politely yet firmly demanding that each family member be responsible for his or her own stuff. By making them pile their belongings onto the bed, go through each item, and organize them accordingly, she subtly reveals just how much work mom has been responsible for (all three couples have children, though in Episode 2, the Akiyamas are empty-nesters).

Episode 1, for instance, follows the Friend family (yes, that's really their name) at their hectic, toddler-filled house. The husband, Kevin, works long hours, so Rachel is responsible for most of the cooking, cleaning, laundry, and child-rearing. It's clearly exhausting, yet Kevin expresses frustration that his wife hires someone to do the laundry, which is upsetting to hear. That's a lot of work, and outsourcing chores, when affordable, is something any family should consider. This uneven workload is repeated in the next three episodes: with the Akiyamas (a near-retirement couple with mountains of stuff) and the Mersiers, who recently downsized into a smaller home.

All three moms (Rachel, Wendy, and Katrina, respectively) shoulder the majority of the domestic duties — at least when audiences are first introduced to these families. It's clear they feel both stressed with the sheer mountain of cleaning they have to do (quite literally in Wendy's case) and are frustrated with themselves for not getting it all done. You really want to pull each one aside and tell them that not keeping a perfect house isn't something they should feel guilty about, but it would probably fall on deaf ears. The internalized gender roles are just too loud. But especially with kids running around, as the Friends and Mersiers do, it's not going to get done without some support from the other family members.

Eventually, the men do step up: Mr. Akiyama tackles what he calls "Mt. Ron," a.k.a., his monstrous pile of baseball cards. Kevin organizes their garage and learns to fold clothes, and Douglas begins helping out more around the house. "Before, I had the wrong mentality to not want to engage and help," Douglas says toward the end of Episode 3. "But now I realize the responsibility should not be on mom. It should be on the family — the members of the house."

This is not isolated simply to the Netflix show — these episodes are a sobering reminder that Americans still have a gendered view towards housework. The OECD (or Organization for Economic Co-Operation and Development) reported that, as of the latest year, men do an average of 150.2 minutes of unpaid work per day, as compared to women's staggering 243.2 minutes. When combined with both sex's paid work, women still come out on top, with 488.8 minutes of total work per day, as compared to men's 485.1. Even when both parents in a couple work, women end up doing more, according to a recent Welch's study.

Even more frustrating, a 2018 study for the Springer journal Sex Roles reported that, on days off, husbands were doing leisure activities 47 percent of the time. 35 percent of that time, however, women were doing housework or childcare. It's important to note that these findings are heteronormative (there is a gay couple featured in Episode 5 of the Netflix series), but it reveals that, overall, chores are still grossly gendered.

In this way, Tidying Up with Marie Kondo is quietly radical — not just in Kondo's minimalistic attitude towards belongings, but in her gentle yet firm demand that each family member take responsibility for the well-being of the house. "[C]ouples can deepen their ties through tidying," Kondo says at the end of Episode 1. And although it's wonderful to see how happy each husband and wife is at the end of each installment, it's equally gratifying to see the husbands darken the door of the kitchen, try their hand at laundry, and pass on that knowledge to their children. Perhaps this equal division of labor is the true life-changing magic in tidying up.

More like this
‘The Ultimatum: Queer Love’ Is Officially On The Way
By Radhika Menon and Kadin Burnett
What’s New On Netflix: Ana De Armas’ 'Blonde' & A Nick Kroll Special
By Arya Roshanian
What Is 'Pretty Wild' Star Tess Taylor Up To Now?
By Morgan Leigh Davies
Here's How To Apply For 'Love Is Blind,' No Matter Where You Live In The US
By Grace Wehniainen
Get Even More From Bustle — Sign Up For The Newsletter