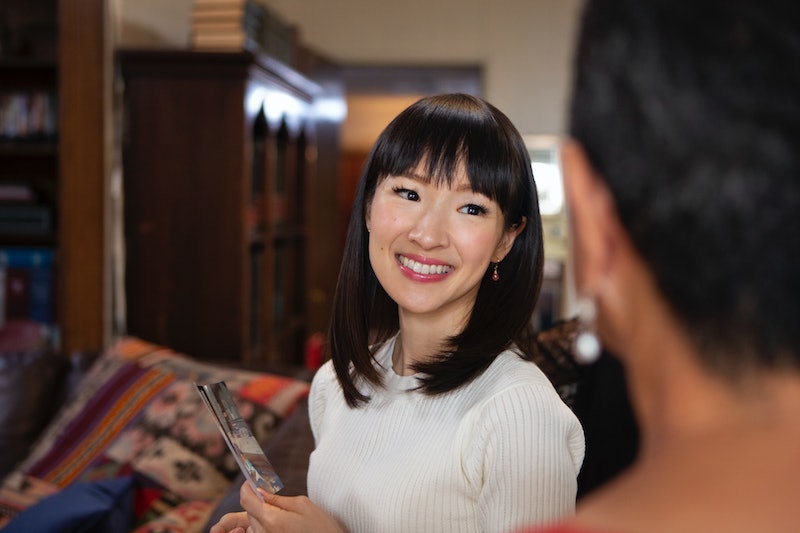 The process of organizing never feels like an easy task. In fact, sometimes it can seem downright overwhelming. (Not to mention that it also ranks zero on the fun scale, unless your name is Monica Geller.) But thanks to the recently released trailer for Netflix's Tidying Up With Marie Kondo series, you'll be itching to start decluttering your life in the new year.

As the title suggests, the eight episode series will center around global organization icon Marie Kondo, and follow her as she goes around to various homes and helps people get organized in a fun and creative way. That's not to say that it won't be an emotional journey, though, since parting with some items may prove to be much tougher for some lucky participants than others. However, that's where Kondo comes in to help making the tidying process as smooth and seamless as possible. And if you don't think decluttering your life can make a difference in someone's life, just look at the reactions of people's faces throughout the trailer and you may soon come to think otherwise.

From a recently widowed woman who is struggling with the idea of parting with her late husband's wardrobe and possessions, to a family who's downsizing from a four-story house to a two bedroom apartment, Kondo's expertise is in high demand and will hopefully change some lives for the better.

The official synopsis for Tidying Up With Marie Kondo, which will make its Netflix debut on Jan. 1, reads as follows:

"In the eight-episode series, Marie Kondo guides people who are at a crossroads, but willing to tackle the clutter holding them back to spark joy in their homes and transform their lives in emotional and surprising ways."

The synopsis also detailed the people who will be working with Kondo over the course of the series to tidy up their lives:

"Tidying Up with Marie Kondo follows a loving family of four who have relocated to a Los Angeles apartment from a four-bedroom home in Michigan; a recently widowed woman grappling with how to let go of her beloved late husband's possession, but not his memory; a young couple living in West Hollywood who are ready to leave their college-style of living behind; as well as soon-to-be parents who realize it’s time to let go of the past to pave way for their future family."

Much like Netflix's highly popular Queer Eye reboot — which introduced the world to the likes of Antoni Porowski, Tan France, Bobby Berk, Karamo Brown, and Jonathan Van Ness and proved to be about so much more than just makeovers — Tidying Up With Marie Kondo appears to have a similar holistic appeal. This woman doesn't just want to organize these people's homes, she wants to metaphorically de-clutter their hearts and minds as well, so to speak.

Everyone has a lot of baggage that they carry around with them, both inside and out, so it's nice when someone comes along to help us unburden ourselves with unnecessary stuff. And there's no better time for a fresh start than at the start of a new year. 2019 just got a whole lot brighter (and cleaner).

More like this
The First Trailer For 'That '90s Show' Includes So Many Nods To The Original Series
By Jack Irvin, Alyssa Lapid and Grace Wehniainen
The ‘Emily In Paris’ Season 3 Trailer Teases Major Career & Love Crossroads For Emily
By Bustle Staff
Elizabeth Debicki On Her Approach To The Most Debated Scene From 'The Crown'
By Grace Wehniainen
Evan Peters Decompressed After 'Dahmer' By Watching This Will Ferrell Movie
By Grace Wehniainen
Get Even More From Bustle — Sign Up For The Newsletter