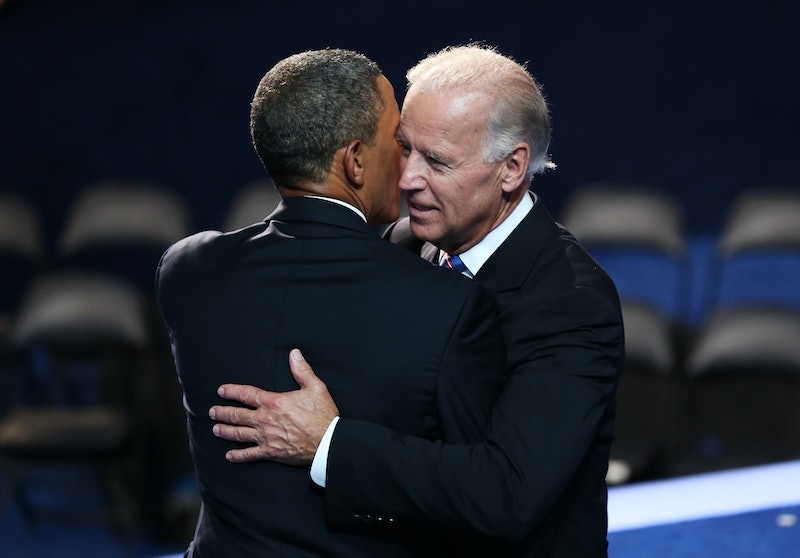 On Tuesday, former Vice President Joe Biden will publish his first book in 10 years: Promise Me, Dad, a memoir of his experiences in 2015, which included losing his 46-year-old son Beau to brain cancer. In Promise Me, Dad, Joe Biden writes that Barack Obama offered to pay for his son Beau Biden's cancer treatments, and the story will have you crying in your cubicle.

Biden first mentioned President Obama's generous offer in January 2016. After being diagnosed with brain cancer in August 2013, medical complications forced Beau Biden to step down from his role as the Attorney General of Delaware in January 2015, but, without his income, Beau's family were put in a difficult financial situation. As a result, Joe and his wife — Beau's step-mother, Jill — were prepared to sell their home, or take out a second mortgage on it, in order to help pay for their son's medical bills and other financial obligations.

Beau Biden died in May 2015. He was 46 years old. The Biden family would later choose President Obama to eulogize their husband, son, and father. In Promise Me, Dad, Joe Biden discusses the moment when President Obama offered financial assistance to his family in their time of greatest need.

Although "Barack was the first person outside [Biden's] family to know about Beau's illness," Biden writes that he had kept the details of his son's declining health and his family's financial crisis under wraps, not even telling President Obama about "the true desperation" of the situation. But in 2014, Beau's ability to speak had become compromised, and both Biden and his other son, Hunter, were worried that Beau would have to resign from his position as Delaware Attorney General, which would leave his family with no income. The prospect of his son's impending resignation and dire financial straits was the catalyst that provoked Biden into speaking up.

But in the middle of 2014, when Beau's aphasia was getting worse, he worried that his illness might eventually effect his cognitive capability. And knowing Beau, Hunt and I became concerned that he might feel honor-bound to resign before his term as attorney general was over. The only income he had at the time was his salary. I told the president about this at one of our private lunches.

"What are you going to do?" he asked.

"Well, he doesn't have much money, but we're okay," I said. "Jill and I can take out a second mortgage on our house in Wilmington if we have to. We'll be fine."

"Don't do that," Barack said, with a force that surprised me. I could see him getting emotional. That he got up out of his chair and walked around behind me and put his hands on my shoulders. "I'll give you the money. I have it. You can pay me back whenever."

Joe Biden's memoir, Promise Me, Dad, is available at your favorite bookstore on Tuesday. The audiobook version is narrated by the author, and is available exclusively on Audible.

More like this
Prince Harry Incorrectly Recites Christina Aguilera’s “Genie In A Bottle” Lyrics
By Jake Viswanath
Meghan Trainor & Daryl Sabara Are Expecting Their Second Baby
By Jake Viswanath
The Mysterious Gunther Corporation From 'Gunther’s Millions' Has Dissolved
By Brad Witter
Rachel Nickell’s Son Wants The Police To Take Accountability Over Errors
By El Hunt
Get Even More From Bustle — Sign Up For The Newsletter
From hair trends to relationship advice, our daily newsletter has everything you need to sound like a person who’s on TikTok, even if you aren’t.