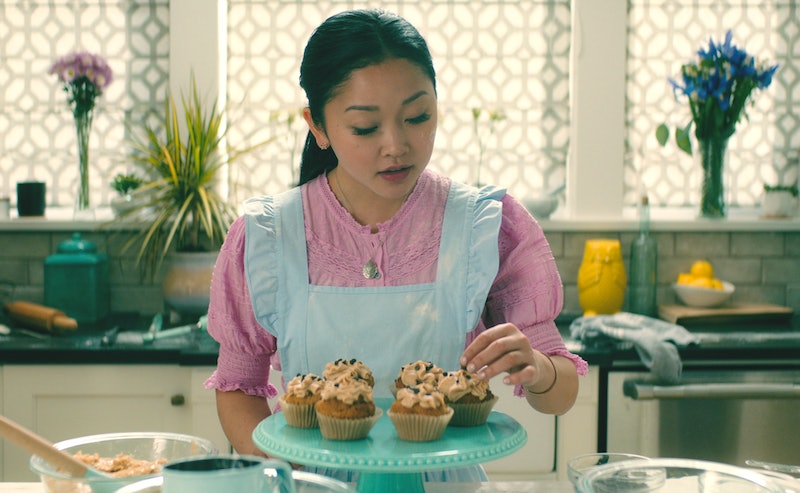 In P.S. I Still Love You, the sequel to 2018’s To All The Boys I’ve Loved Before, our heroine Lara Jean Covey (Lana Condor) finds herself caught in an enviable love triangle. Though she’s now in a relationship with Peter Kavinsky (Noah Centineo), she’s also reconnected with her middle school crush, John Ambrose McClaren (Jordan Fisher). To cope with her conflicting feelings, Lara Jean stress bakes.

In Tasty-style quick cuts, Lara Jean works out her feelings for both of the boys she’s loved before through pastry. In her textbook Nancy Meyers kitchen, she mashes butter into flour for flaky, delicate cherry turnovers, a Valentine’s Day present for Peter. She sprinkles mini chocolate chips on chocolate-peanut butter cupcakes for a group hang with John Ambrose and plates them on a robin’s egg-blue cake stand that perfectly matches the hue of her stand mixer, rolling pin, and ruffled apron.

While creating delicious-looking creations for the film was important, P.S. I Still Love You food stylist Kate Bell says that conveying the “angst” Lara Jean feels while baking was an integral part of the kitchen scenes. “You have to get into the character’s head a little bit [when you’re food styling],” Bell tells Bustle. When she gave Condor a frosting lesson for the cupcake decorating sequence, she taught her how to make the desserts look like they were made by a frazzled 16-year-old girl, not a pastry chef. “Normally the food has to be perfect. [But] for [Lara Jean], it wasn’t. It’s almost stressful.”

Lara Jean is lovingly called out for pouring her emotions into baked goods, too. “What is going on in that head of yours?” Peter asks early in the movie, gesturing to her homemade snickerdoodles. “They’re your pensive bake,” he says. The attention characters pay to Lara Jean’s baking presented Bell with a unique challenge. “Most people don't even notice food when they're watching a show, so it’s pretty interesting when it’s highlighted as part of a character,” she says. Her job was to make sure the desserts looked beautiful and broadcast Lara Jean’s internal conflict.

Part of the inspiration for Lara Jean’s stress baking came directly from Jenny Han, the author behind the To All The Boys trilogy. “In 2016 it was an election year, so I was turning to baking. [In the third book] Lara Jean tries to bake a perfect cookie, because I was actually doing that in real life,” Han tells Bustle. It’s a passion of Condor’s as well. Earlier this year she told Teen Vogue that cooking was her “all-time love.”

Stress baking is so effective because it pulls you out of your head. “Baking [forces] you to put down your phone, get your hands dirty, and pay close attention to what you’re doing,” Amanda Mull wrote for The Atlantic in 2018. It’s also very similar to mindfulness meditation, a proven destressor. But unlike meditation, baking leaves you with a finished, physical product, something to show for your efforts that’s just as satisfying eaten as Instagrammed.