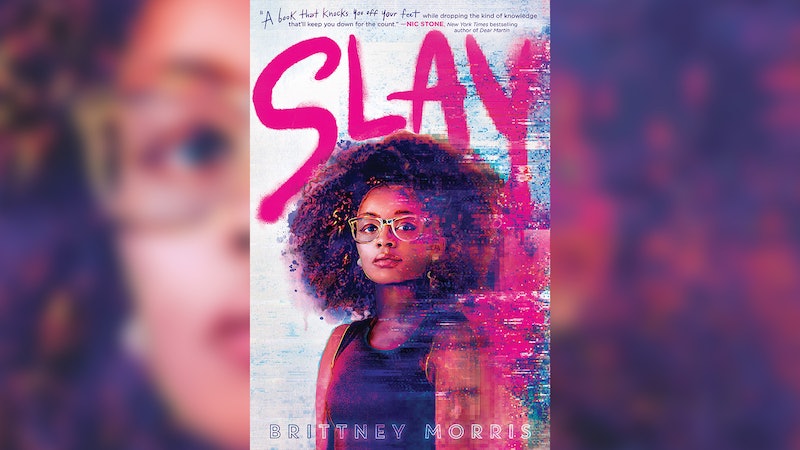 If you enjoyed Black Panther and Ready Player One, you're going to love this new YA novel. Debut author Brittney Morris's SLAY centers on a young Black genius who must defend the online gaming community she created from both the media and invading trolls. The book comes out on Sep. 24, but Bustle has an exclusive sneak peek at what adventures await you below, plus a look at the brand-new book trailer.

The book centers on Kiera, a high-school student and programmer, who designed the game, named SLAY, as a community VR space for Black gamers. SLAY, the game, has a dueling mechanic that "us[es] elements of Black culture," according to the novel. The game has already taken off in the real-world, where SLAYers ask coded questions to learn whether others are part of the community. But for all of SLAY's popularity, Kiera can't let other people know that she plays the game, let alone that she's its creator.

When a dispute over SLAY gets someone killed, however, Kiera's secret world goes public in a painful way as the game "is labeled a racist, exclusionist, violent hub for thugs and criminals" by the media, and trolls threaten to sue the game developer for "anti-white discrimination." As pressure mounts, Kiera will need to stand up and fight back if she wants to save SLAY. If that hasn't convinced you to pick this one up, watch the book trailer below and scroll down for an excerpt:

Check out Bustle's exclusive SLAY excerpt below, and be sure to pre-order your copy of Brittney Morris' first book, A.S.A.P.

When I get to my room, I lock the door and run to my computer chair. When I log in, there are 641 new DMs in my SLAY inbox. That’s the name of the game — SLAY. It’s not an acronym, although that’s always the first question of anyone who joins, and people have been offering suggestions for acronyms ever since its launch. It’s a double entendre, meaning both “to greatly impress” and “to annihilate.” I thought the name was more than appropriate for a turn-based VR card game where players go head-to-head in card duels using elements of black culture. Steph would love it if she ever knew about it. Or if she knew I was the developer. But for all the confidence I have in my sister, one thing she absolutely can’t do is keep a secret. And on top of that, her constant jabs at Malcolm make me wonder if she’d get the game. There are players from all over the world, all walks of life, many who grew up poor like Malcolm, regularly “decolonize” like Malcolm, and surround themselves with specific kinds of black influences, like Malcolm. I don’t know if I can share SLAY with her, because I don’t know if she’ll accept it — all of it. Not without overthinking it. So I won’t. Probably not ever.

I scan the messages for anything important, like major game glitches. I don’t want people to miss the semifinals because of technical problems. Most of them are asking what time the duel begins, even though I put a section clearly marked Duel Calendar in the navigation panel on the left side of the screen, the panel that you have to look at whenever you’re configuring your character.

I roll my eyes at the willful ignorance and glance at the clock. Five minutes till duel. I’ll read the rest of the messages later. I unlock the bottom drawer of my desk and pull out my headphones, and the gray VR socks, gloves, and goggles my family doesn’t know I bought.

My heart pounds as I slip them on. I can’t wait until I go off to Spelman so I can play with a noise-canceling headset. For now, I have to listen for my mom yelling through the door that it’s dinnertime, so I can say five more minutes and deflect suspicion.

I look up and around at them all, and suddenly I miss all those summer nights Malcolm and I used to lie in my backyard in SoDo and watch what little of the night sky the city smog would leave us.

I log in and my pulse races as I watch my logo appear in brilliant green all caps against a black background. SLAY, it says on the screen inside my goggles.

I get up and stand in the middle of my room so I don’t knock anything over. All I keep in my room are my bunk bed with the sofa on the bottom, my bookcase, my dresser, my desk in the corner by the door. When it comes to VR, the less furniture around me, the safer. Come on, come on, I urge as the map fills the screen. It’s nighttime in this region — the Tundra — so the navy skybox is up, almost black, peppered with shimmering stars. I look up and around at them all, and suddenly I miss all those summer nights Malcolm and I used to lie in my backyard in SoDo and watch what little of the night sky the city smog would leave us. Nights when we got to shut out the rest of the world and just be ourselves, swapping music, talking about which black genius’s opinions he was reading that day. I captured several of his favorites in SLAY — Maya Angelou, James Baldwin, and Langston Hughes.

I left my character, Emerald, here in the Tundra so it would be easier to get to the duel. The snowy mountains contrast nicely against the sky, spiking upward in a basin all around me. I raise my hand to slide the virtual keyboard from the right side of the screen, type Fairbanks Arena using the holographic keys, point my left hand to the north, and pull my trigger finger, allowing me to teleport at light speed. New players might think I named the arena after Fairbanks, Alaska, but the information panel would tell them I actually named it after Mabel Fairbanks, one of the first professional black figure skaters.

Mountains zoom past me. I smile, impressed at how good they look up close. I was having a fantastic day when I created the Tundra. The textures are flawless — smooth and realistic. The snow looks fluffy up close. Every mountain looks hand-painted, thanks to donated art from a few indie artists who SLAY. I built the arena itself entirely of diamonds, because I could, and because a diamond arena in an icy region is hella dope. It’s one of the biggest, too. It can hold three million people, since I hope one day the game gets that big.

A few people recognize me and step aside.

“It’s Queen Emerald!” says the text over the head of an especially tall woman in a blood red strapless gown with a fifty-foot train flowing behind her.

For now, chat reads over a hundred thousand logged-in people out of the five hundred thousand people with SLAY accounts, which is still a lot for a single duel, even if it’s the semifinal round of a tournament, but I guess it’s prime time for people my age to be online, at least here on the West Coast. I’m close enough to see the people forming a line into the arena now. I slow my pace and I’m flying smoothly over all the attendees. Most players choose to be either royalty or characters with special powers or weapons. I descend to the ground and join them, walking in place in my room to make Emerald move.

A few people recognize me and step aside.

“It’s Queen Emerald!” says the text over the head of an especially tall woman in a blood red strapless gown with a fifty-foot train flowing behind her. Her wrists have golden bracelets up to her elbows, and her neck has similar ones. Her hair is twisted up into an enormous bulb on top of her head, with a huge golden crown encircling it, a giant ruby as wide as her torso set right in the middle.

At first I tried to make the dresses realistic and material, but it was causing problems when people would step on the trains, veils, and robes, and keep characters from walking smoothly. So she’s wearing a dress that’s immaterial, meaning the fabric will go right through other players and objects without obstruction, a weird concept—based on collision physics—to think about when you’re talking to her face-to-face.

A woman in bone armor notices me and takes a fighting stance. Her unnaturally large boobs and red headband around her enormous Afro make her look like a Mortal Kombat character.

Text appears above her head. “I hope you got my message, Emerald. We meet at dawn.”

Everyone says, “We meet at dawn.” It’s how we say, “I challenge you to a duel at a later time.” In fact, it’s become an identifier in the real world. About a year ago, kids in the grocery store started coming up to me and asking, “Did you thaw the meat?” or “Did you get the meat?” or “Do you eat meat?” and after some perusing in chat, I realized it’s a coded question. They ask pretty much any question involving meat, to which I’m supposed to reply, “We meet at dawn” if I want them to know I SLAY.

When Reddit first launched, it was so secretive that Redditors in real life used to ask the highly conspicuous question “When does the narwhal bacon?” but I like our version better. It’s more covert. “Did you thaw the meat?” is a totally normal question to ask. “When does the narwhal bacon?” will make people ask, “WTF are you Internet kids up to?” which is exactly what I don’t want to happen. I know there are SLAYers who are just like me — who live one way during the day at work or school, and would rather their nonblack classmates or coworkers not know they live completely differently online. Completely authentically.