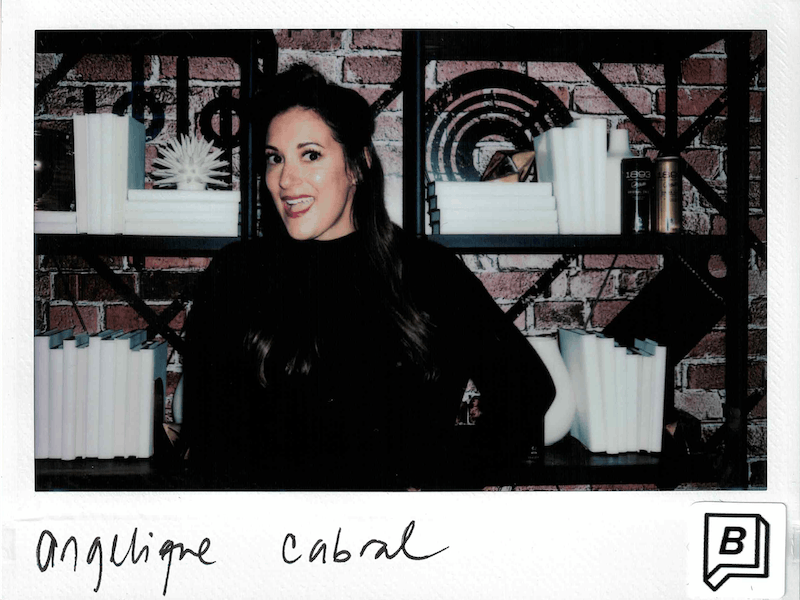 When Bustle editors go on the road, whether it's for a film festival, a comic book convention, or a set visit, we want to give the celebs we meet along the way the chance to leave their mark. Literally. So we have them pose for polaroid that captures their latest adventure, hand them a pen, a piece of paper, a few questions, and ask them to get creative. The rest is up to them. This time, we caught up with one of the stars of Band Aid, Angelique Cabral at the 2017 Sundance Film Festival in Park City, Utah for the Bustle Booth On Location.

An actor you may recognize from Enlisted (on which she played Sgt. Jill Perez) and more recently, CBS' Life In Pieces, Angelique Cabral is also someone who got to live the dream of working on a film with an all-female crew. Her real life friend and the writer, director, and star of Sundance's Band Aid, Zoe Lister-Jones, created an ideal environment when she went all girl power on her production hiring.

"I felt strangely, like, not judged and I realized, do I feel like that on set normally? I thought this was so easy and fun. There's no checking yourself, clocking yourself. It felt very easy," Cabral tells me when we sit down in Park City during the fest.

It's clear that Cabral felt most like herself on this shoot, surrounded by other women, so what better time than now to get to know Cabral a bit better?