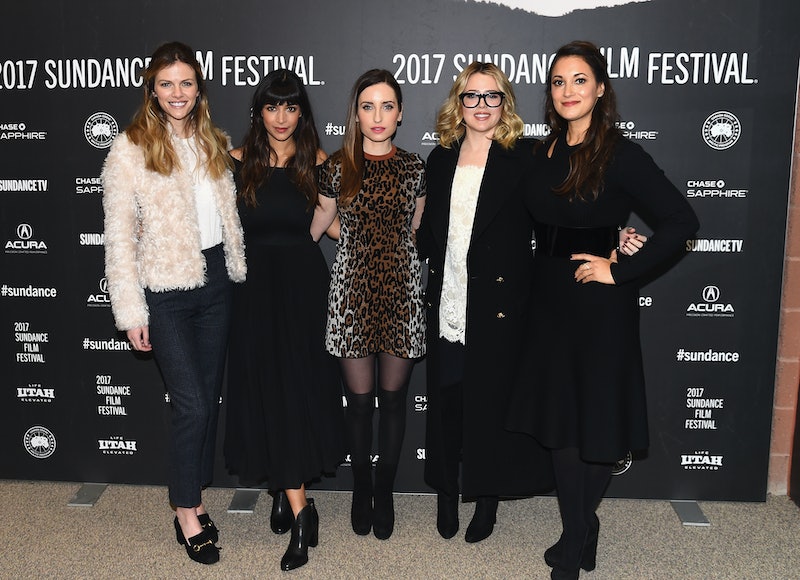 The reason that so many filmmakers give when asked why there aren't more female filmmakers making it big in the industry is that the industry is male dominated from top to bottom, all the way down the production assistants and gaffers. While it's not as if every single film set gig is occupied by a man, it can often feel that way. Thankfully, the maker of one Sundance film — Band Aid, about a couple who decides to work through their fights and squabbles by writing songs together — endeavored to find out what would happen if a film's crew was entirely made up of women — from the women who wrote the score (Jess Wolfe and Holly Laessig of Lucius), to the crew, everyone working on the production side was a woman. The results were, well, kind of amazing.

And after trudging through the Sundance snowstorm to sit down with me at one Park City's many lounges set up for the festival, Band Aid writer, director, and star Zoe Lister-Jones and her co-star Adam Pally explain the effect of this brave new world.

"It didn’t change the process; I think it just was nice to be around," says Pally, as Lister-Jones shakes her head with a smile. "I don’t think it was just a thing where an all female crew is going to be amazing because it’s an all female crew, I think it’s a testament to Zoe that she picked the right kind of nasty women to be on this crew and so it was beautiful."

It is encouraging that Pally didn't note any difference (listen up, men of the world: hiring women probably won't drastically change the process you're used to).

"I felt strangely, like, not judged and I realized, do I feel like that on set normally?"

But what's also encouraging is that for Lister-Jones and her fellow female actors, that same experience was different. They all express that the set of Band Aid is their best working experience to date.

"I will contradict Adam just because I like doing it, but I would say that it did really change the way that the set was run and I think that women are really incredible listeners," says Lister-Jones. "Adam has made this point before, but I think that women lead with questions, rather than with an answer and that’s a really beautiful thing to see in action and in the creative process because that makes it this an incredible collaborative process, rather than, again, an ego-driven, department by department kind of butting heads, which can happen a lot on indie films. And so I think it is a testament to the specific women that I chose, but I do think that it’s also a testament to women in general."

"It was the best experience, across the board. Very different," says Cabral, as Delfino and Decker echo her almost exactly. "I felt strangely, like, not judged and I realized, do I feel like that on set normally? I thought this was so easy and fun. There's no checking yourself, clocking yourself. It felt very easy," Cabral adds.

"It gave me the confidence to play, and I don't know why you wouldn't feel that way with men," says Decker. "But for some reason it felt super safe and it felt like a place you could experiment."

While her co-stars dance around the elephant in the conversation, Cabral opts to lay out one of the big reasons an all female crew might make women feel more at ease in front of the camera, finally saying, "It didn't feel like anyone was like, checking you out, which is always a very weird thing on set."

Lister-Jones also notes that for a film that includes a lot of vulnerability, feeling safe — and perhaps not feeling the presence of the male gaze — made the process so much more comfortable.

"There are a lot of sex scenes in the movie and as a woman, that is an incredibly liberating experience having an all female crew and shooting that," says the actor and director.

Apparently, the entire vibe of the set even felt unlike any production these women had experienced in the past.

"I do think there was something very efficient about the way they ran the show. It was like let's get this done, with no yelling, no stomping," says Decker.

"It was so inspiring watching this girl like my size unloading all this stuff from a truck."

With that, Lister-Jones would likely concur. She recalls some initial reactions to this new world of an all-women set: "When Susie Essman came on set for the first time (she plays Adam’s character’s mom) she was like, 'It’s so quiet and it’s so efficient' and I was like, 'Yeah' and she said it felt like a different planet. And with everyone who walked on set, it was sort of gratifying to see their response because they all acknowledged the energy."

And then of course, there's the argument that much of the work on set consists of manual labor, and therefore isn't suited to women. Well, guess what, skeptics? The women on the set of Band Aid did all that too.

"It was so inspiring watching this girl like my size unloading all this stuff from a truck," says Delfino. "It was like, oh, maybe I can do that. It was very motivating."

But for all the subtle, qualitative benefits of an all-female crew, it's important to acknowledge the broad strokes takeaways too: Women can do the same jobs that men do, period. And if anyone still can't wrap their head around that, this very real, very charming film is a very easy way to prove them wrong.