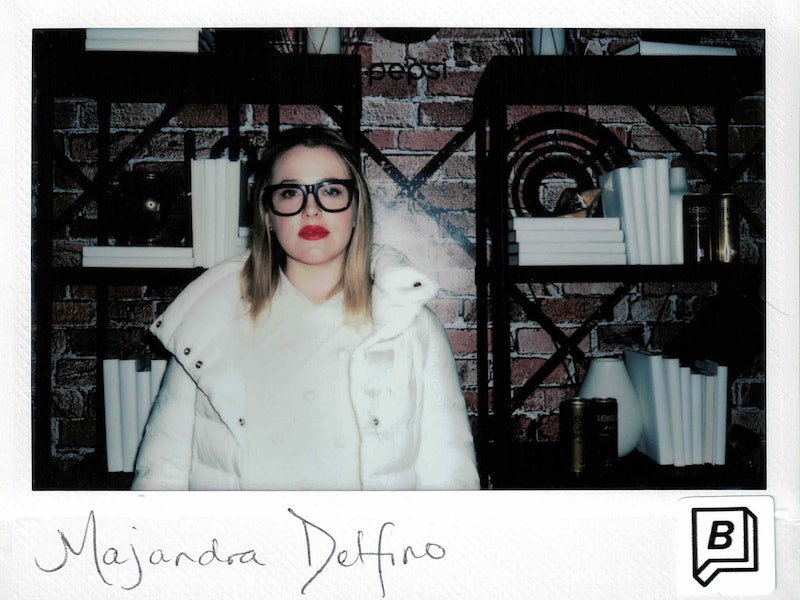 When Bustle editors go on the road, whether it's for a film festival, a comic book convention, or a set visit, we want to give the celebs we meet along the way the chance to leave their mark. Literally. So we have them pose for polaroid that captures their latest adventure, hand them a pen, a piece of paper, a few questions, and ask them to get creative. The rest is up to them. This time, we caught up with one of the stars of Band Aid, Majandra Delfino at the 2017 Sundance Film Festival in Park City, Utah for the Bustle Booth On Location.

While many '90s kids probably know Majandra Delfino from her unforgettable role on Roswell — the WB show about alien-teenagers — the Venezuela-born actor has been working on things a little less extraterrestrial in recent years. You've likely seen her on shows like State of Georgia or Friends With Better Lives, but now, she's promoting a film she worked on with her friends — and a totally female film crew, to boot. Band Aid, from writer, director, and star, Zoe-Lister Jones, takes a look at a couple learning to cope with their disagreements by writing songs. And it just so happens to boast a film crew that is made up of women, and only women.

While Delfino is proud of this aspect of the film, she also took a few moments to tell us a bit about herself.