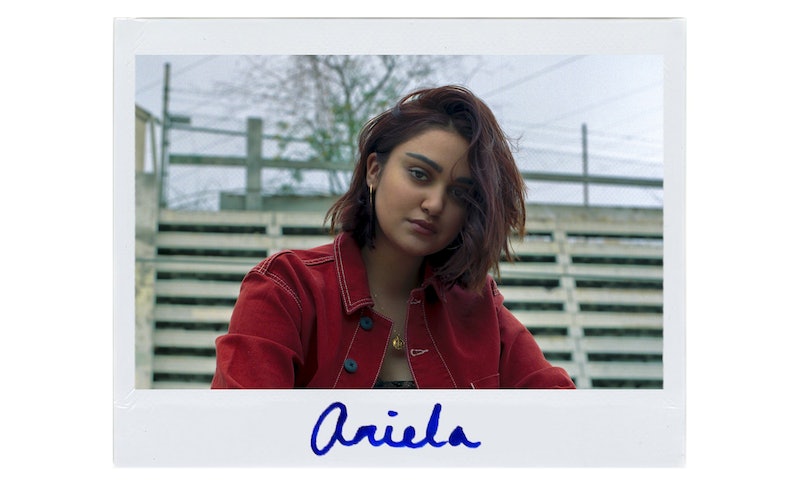 When celebrities hang out with Bustle writers, we want to give them the chance to leave their mark. Literally. So we hand them a pen, a piece of paper, a few questions, and ask them to get creative. The rest is up to them. This time, Ariela Barer from Runaways is leaving her mark in the Bustle Booth.

In November 2017, Hulu released the first season of Marvel's Runaways, which centers around six teenagers with varying supernatural abilities who realize their parents are actually evil (not just the normal type of evil that teenagers usually think their parents are) and are forced to fight against them. Ariela Barer plays Gert Yorkes, the purple-haired social activist of the group who has anxiety (very relatable) and a telepathic connection to her dinosaur (less relatable).

That was one of the things that drew Barer to Gert, that "you could have anxiety and be a superhero. That those are not mutually exclusive," she says when speaking to Bustle. She is excited for her character to "open a conversation on mental illness," to show people watching that there are others like them, that they are not alone. And as someone who has had experiences with anxiety herself, she believes it's important to have that representation to relieve it of its stigma.

But there are other parallels Barer sees with Gert aside from the anxiety and feminism, "I believe both Gert and I are secretly romantics but refuse to admit it." And Barer says that's something both she and Gert struggle with, even if Gert handles it a bit better in this coming season when she continues to explore her relationship with lacrosse player and engineer Chase Stein. A relationship that garnered some negative reactions on social media based on the "unlikeability" of her character. But Barer laughs off the double standard — "if there's a female character you disagree with, she's unlikeable, if it's a male character, he's an anti-hero, it's wild!"

But Barer isn't letting naysayers weigh her down; in 2018, she also released Ladyworld, an all-female Lord of the Flies-esque scenario in which eight girls are stranded in a house without electricity. That Barer is exploring the female psyche and joining in on projects with women at the helm is a testament to how aligned Barer is with Gert. Well, except for the dinosaur. Find out more about Barer in her Bustle Booth below!

More like this
'Grey's Anatomy's New Intern Got Advice From Dr. Bailey Herself
By Grace Wehniainen
Lauren Lyle Bustle Booth
By El Hunt
On 'The Handmaid’s Tale,' Christine Ko Fights Back
By Gretchen Smail
Who Is Nick Cannon Dating & How Many Kids Does He Have?
By Jordyn Tilchen and Radhika Menon
Get Even More From Bustle — Sign Up For The Newsletter