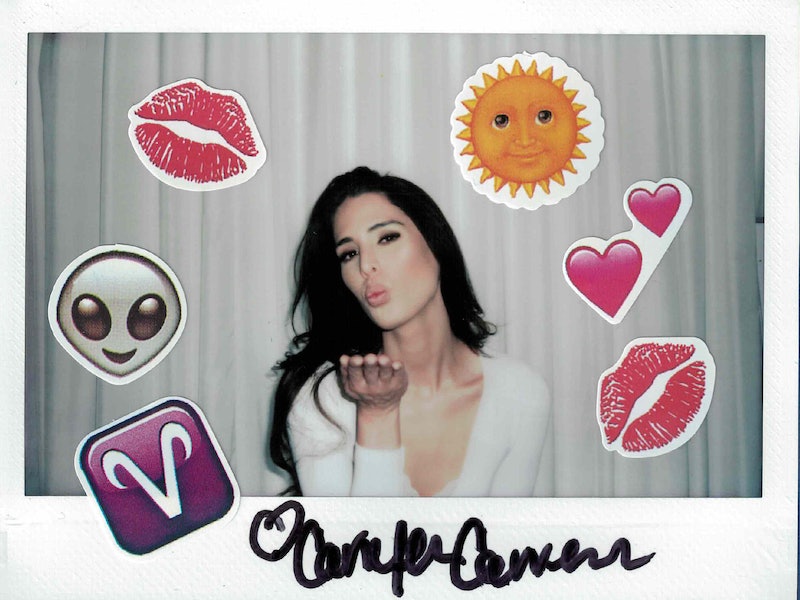 When celebrities come into Bustle HQ in New York, whether it's for a photoshoot, videoshoot, or a Facebook Live, we want to give them the chance to leave their mark. Literally. So we hand them a pen, a piece of paper, a few questions, and ask them to get creative. The rest is up to them. This time, the model, actress, activist Carmen Carrera is leaving her mark in the Bustle Booth.

When it comes to the issues, Carrera is outspoken and proudly so. That much was clear when the 31-year-old New Jersey native recently spoke about her Fusion TV episode of Outpost with Bustle, which focuses on the plight of the transgender community in Brazil. "There's no one really fighting out there for a better life, they're just kind of dealing with what they have," she says. "And I'm afraid that in the future it's going to cause them more pain. So that's how I felt. I felt instantly, like, I need to save them. I don't know if that's possible, but I want to so bad."

In addition to her work in Brazil, Carrera has also been an advocate for People with HIV after losing her father to complications from AIDS, raising awareness for the virus and appearing in the "Play Sure" campaign that urges high-risk groups to practice safe sex. More than a model or an actress, she's a warrior, and absolutely someone who should be on your radar if she somehow isn't already.

But, hey, check out her Bustle Booth if you don't believe me, and let her set you straight in her own words.