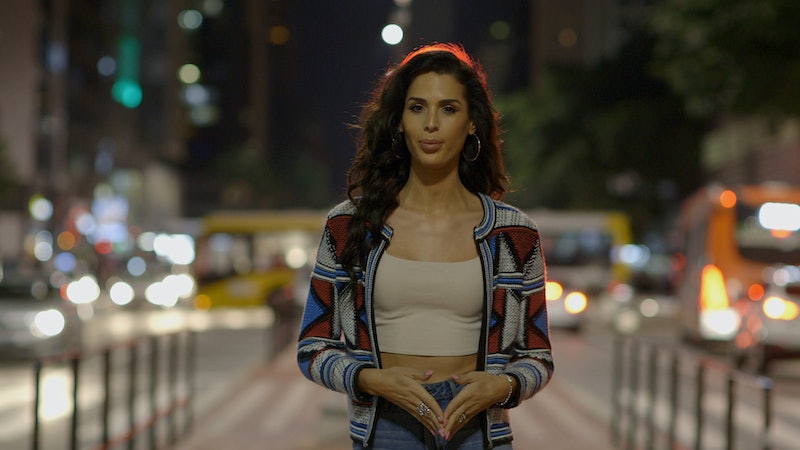 There's a startling disconnect in Brazil that actress and transgender activist Carmen Carrera explores in the premiere episode of Outpost: The São Paulo gay pride parade is believed to be the largest pride parade in the world, and yet 46.7 percent of all trans murders occur in Brazil. Outpost is a docuseries set to air on Fusion beginning on March 26. On Friday, Carrera sat down for a Facebook Live interview with Bustle about her experiences in Brazil, and she revealed her time spent talking with the country's transgender community gave her a new respect for the importance of allies in fighting for change in other countries, as well as in America.

During her three-day trip in Brazil, Carrera recalls encountering many transgender people who lead double lives, both for their own safety and to avoid coming out to their families. She says she was also heartbroken to find how many transgender women work in the sex trade industry because job discrimination has left them with no other opportunities.

Cerrera said in the interview,

"There's no one really fighting out there for a better life, they're just kind of dealing with what they have, and I'm afraid that in the future it's going to cause them more pain. So that's how I felt. I felt instantly, like, I need to save them. I don't know if that's possible, but I want to so bad."

Often when people discuss transgender issues, they may only think in terms of how these issues affect people in the United States. While our country still has a long way to go when it comes to equality and educating people about the importance of trans visibility, the trans communities in places like Brazil are suffering from having fewer advocates and living in constant danger just for being themselves, as Cerrera points out.

Her experiences made her recognize that she possessed a sense of privilege, just because she lives in the U.S. and can "pass" among straight people. Even with all the struggles trans people face in America, there is an opportunity for them to be heard and to find support in safe spaces. These concepts are completely foreign to the people in Brazil, according to Cerrera. She explained,

"With all these amazing things happening for trans people in the mainstream, as far as visibility goes, it is really inspiring to those in those individuals in other parts of the world, who don't have it as easy as we have it here, where people are actually interested in hearing what we have to say and are more open to understanding our struggle. Out there it's not the same. "

The Outpost episode is going to be a powerful exploration of the dual nature of LGBTQ rights in Brazil. As an activist, Cerrera's passion is evident, and her time in Brazil — both attending the pride parade and speaking with trans people whose firsthand accounts of their lives in the country stand in stark contrast to the reverie — is absolutely essential viewing.

Cerrera believes education is the key, both in the states and in other countries to building better lives for the next generation of trans people. It's clear the actress is going to be part of leading the charge when it comes to making a positive difference in the lives of trans people everywhere.

More like this
'Stranger Things' Finn Wolfhard Is “Proud” Of Noah Schnapp For Coming Out
By Sophie McEvoy
Ozzie’s Coming Out Scene With Kitty On 'That ’90s Show' Has Twitter Sobbing
By Brad Witter
Gen Z Are Twice As Likely To Identify As Queer, According To New Data
By Sam Ramsden
Adam Lambert Called Out The George Michael Biopic Over Potential Casting
By Sam Ramsden
Get Even More From Bustle — Sign Up For The Newsletter
From hair trends to relationship advice, our daily newsletter has everything you need to sound like a person who’s on TikTok, even if you aren’t.