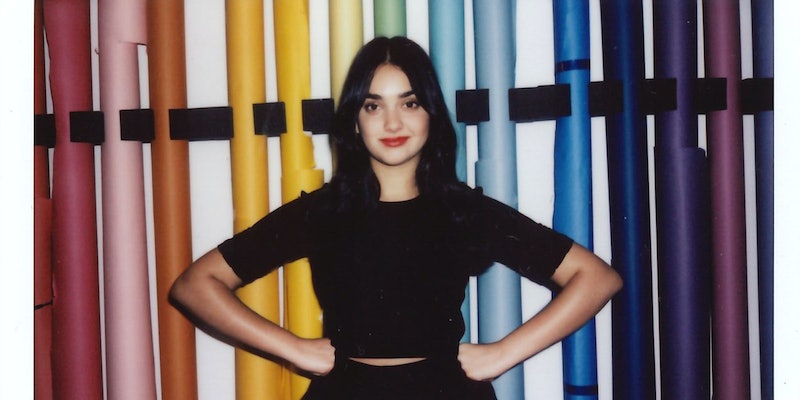 When celebrities hang out with Bustle editors, we want to give them the chance to leave their mark. Literally. So we hand them a pen, a piece of paper, a few questions, and ask them to get creative. The rest is up to them. This time, Blockers star Geraldine Viswanathan is leaving her mark in the Bustle Booth.

"I want to go to prom, get drunk, get potted up on weed, and lose my goddamn virginity." This is Kayla (Geraldine Viswanathan), the outgoing and confident high school senior planning to have sex on prom night, along with her two best friends, Sam and Julie, in directo Kay Cannon's new R-rated comedy Blockers. Although it's a movie full of laughs, Blockers also shines a light on the grey area of consent, and newcomer Viswanathan couldn't be prouder of that fact.

"Kay [Cannon] and I definitely made sure that consent was huge," Viswanathan tells Bustle when she stops by the office. Kayla, an athlete, embraces what the actor describes as a "go hard or go home" attitude when it comes to prom night. "I really just looked at my character as the most confident of the girls," she says. "I was just trying to be as real to that." Kayla wants to drink, she wants to do whatever drugs her prom date Connor (aka Chef) has baked into goodies for her, and she also wants to have sex. But no matter how confident she is in her plan, drinking, drugs and consensual sex don't always go hand in hand, potentially creating an issue around the idea of consent.

The question of whether or not Kayla would be able to consent to sex after drinking and taking drugs was something both Viswanathan and Cannon were highly aware of. "My character goes crazy, and just wants to party on prom night, and does a lot of drinking and drug taking," the actor says. "So for us it was really important that consent was really clear, because that’s where it can get muddy."

Viswanathan points to one specific scene in Blockers, in which Kayla pointedly tells her date that she plans on having sex with him that night before taking her first sip from his flask. This moment is meant to take away any doubt that, even as she gets more inebriated throughout the night, Kayla is a consenting party to any and all sexual activity.

The topic couldn't be more relevant these days, even though Blockers was filmed long before the fallout from Harvey Weinstein and the rest. "It's crazy," Viswanathan says. "We shot it before, of course, it all came to the surface, but it just couldn't be better timing, because it's so at the forefront of people's minds." Also part of that movement: a call for more women directors, another thing Blockers has on its side. "When I read the script, I was like, 'Oh yeah, it makes sense Kay Cannon is directing. Like, there's no way that this should be directed by a man,'" Viswanathan says.

Despite how it might have been initially marketed as a movie about parents desperately trying to stop their teenage daughters from having sex on Prom night, Blockers is really a movie about female friendship and young women coming into their own. "That's what excited me so much about this movie, was like, reading the script and being like, 'Oh, this is how I talk to my two best girlfriends,'" Viswanathan says. "And for me, it's like, I had my two best friends in high school and we talked about everything, and like sex. And, you know, you want to do everything with them; you want to tell them about everything, so I love that it's so authentic to that."

As far as first movies go, Blockers is a pretty great one, and it's an experience Viswanathan doesn't take for granted. "I feel very spoiled because it was such a friendly, nurturing, supportive shooting environment," she says. It's a safe bet that audiences will be seeing a lot more of the actor in coming years, but in the meantime, fans can get to know their new fave comedic actor with this Bustle Booth questionnaire. Let the Viswanatha fandom begin.